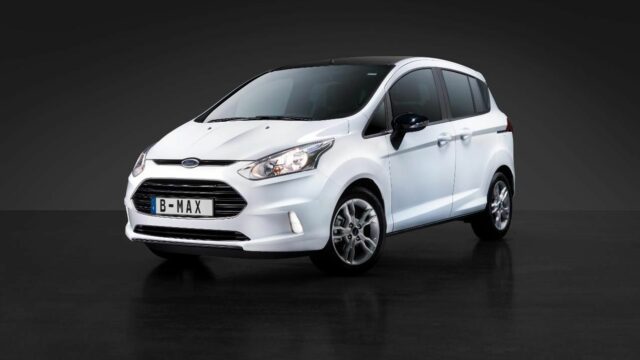 The Ford B-Max is a supermini-based people carrier which comes with practical sliding doors for rear occupants, a spacious interior, peppy engines and road manners that are above the class average.

Its main selling point is probably the ease with which you can put people and stuff aboard; it lacks a B-pillar and with all doors open, fixing a child seat in place or just climbing aboard are very easy.

You can get the B-Max with an old-fashioned 1.4-liter engine with no forced induction, yet it falls short of the other smaller displacement and force-fed units.

Whichever of the turbocharged power plants you decide to go for, it will be a good choice, with the gasoline engines offering more top end punch and refinement, while the diesels give the usual low-down torque, higher efficiency with the tradeoff being extra vibrations and clatter.

While it would be a stretch to call it a driver’s car, the B-Max is positive to turn in, quite agile and doesn’t really understeer all that much. However, the steering is noticeably more vague than it is on a Fiesta and the springs allow the car to roll more, as well.

None of the above is alarming, though, and both the steering and suspension are above class average in terms balance and also quality of ride.

Back when it was tested in 2012, the B-Max was awarded the maximum five-star safety rating by Euro NCAP. Standards for the test have increased in stringency since then, and nowadays require active safety aids to get five stars.

The B-Max doesn’t have the softest suspension setup in its class, but it offers a good blend of cornering and comfort. It’s also worth noting how well damped it is, as well as good at filtering out road imperfections.

Four people will travel in comfort in the B-Max, and long journeys shouldn’t be a problem.

Assembly and materials are fair in the B-Max, although none is really excellent. Some materials do feel a bit downmarket compared to the Fiesta with which it shares its underpinnings, but it’s by no means bad.

The B-Max is your typical people-carrying hatchback whose main party piece is its sliding door. This, in conjunction with not having a B-pillar, results in very wide openings on both sides, making access to the front or rear seats really easy.

It also rides a bit higher than the Fiesta, so you slide right in, as opposed to having to descend to get aboard.

Just like any other new Ford, the B-Max comes with SYNC2 infotainment. It’s widely acknowledged to sometimes not be frustrating to use, annoying the user with slow response times, freezes and a visible lack of processing power even for the most menial tasks.

All engines are generally efficient, with the diesels maintaining their efficiency outside of town; gasoline engines shoot closer to their claimed efficiency figures in town, whereas diesels are more frugal on the open road.

The diesels are claimed to average just over 4 l/100km, but you do lose some refinement if you opt for them. The 1.0-liter EcoBoost sounds muted and quite hushed unless thrashed and makes the entire package feel more upmarket.

The B-Max comes well equipped as standard, and unless you want to shell out for some toys you don’t really need, just pick which engine you like and then configure from there.

However, most cars will be sold in mid-spec guise, so they’ll likely feature alloys, USB and Bluetooth connectivity and climate control.

The decision to buy a Ford B-Max over any of its talented competitors is difficult. You have to like its sliding doors, slightly polarizing interior and exterior styling and also enjoy its sharp steering and above-class-average handling.

There are other more luxurious-feeling competitors out there, and also ones that use less fuel or ones that look better, but as a fun-to-drive all-rounder, the B-Max is a more-than-valid choice.