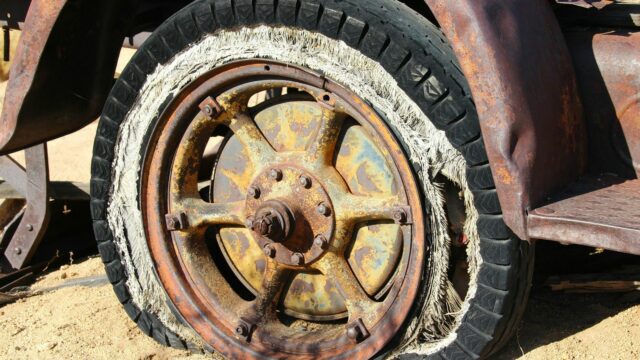 Old tires are moving time bombs that can be defused with proper knowledge on how to read their age, coupled with proper maintenance and periodical inspection.

We can't really stress hard enough about how tires are one of the most important components of the cars we drive. Since we have already talked about ways of looking after tires, so it's time we tackle another issue: aging.

What is tire aging?

Just like any natural process, tire aging comes with its very own mechanism. In fact, you can break it down into three phases which involve nothing else than pure chemistry.

The initial stage makes the tire stiffer and more fragile thanks to a process known as vulcanization. Rubber molecules are interlinked using sulfur during this process under high heat and pressure during manufacturing.

However, vulcanization never stops during the tire's lifetime, as it absorbs light and heat, which over time, change the rubber's properties from elastic to stiff and rigid; therefore, breakable and hazardous.

The second phase involves oxidation – basically, oxygen found in the air weakens the strength and elasticity displayed by the rubber. Or how your chemistry teacher would put it: oxygen causes cross-linking between polymer chains.

Thirdly, water can find a way through the tire and destabilize the rubber to steel-belt bond with similar effects as triggered by the first two phases: tire weakness, brittleness, and poorer elasticity.

How do I know how old a tire is?

Every tire comes with a TIN (Tire Identification Number) often seen as a serial number. In the US, the Department of Transportation and the NHTSA require that number to begin with the "DOT" letters. Furthermore, the TIN might consist of a combo of 12 letters and numbers at most.

However, the most significant digits are the first and the last ones. The first two letters or numbers tell you the tire's manufacturer and plant code.

If you want to know when the tire was produced, it's the last digits that should interest you. But there's a catch: before 2000, the last three digits stood for the week and the year of production. For example, if you can read "418" then the tire was manufactured in the 41st week of 1998.

Starting January 2000, each new tire uses a four-digit code at the end of the identification number. Therefore, the first two numerals stand for the week of production while the following pair represents the year of production. Hence, the "4100" code tells us the tire was made in the 41st week of 2000.

With all this taken into consideration, it's hard to say exactly how old is too old when it comes to tires. For example, manufacturers consider that if you drive less than 8,000 miles (around 12,800 kilometers) per year, your tires might get old before wearing out. As a result, most tire fabricators recommend that all tires older than ten years should be replaced with new ones, even if they don't show signs of damage or haven't reached minimum wear out depth.