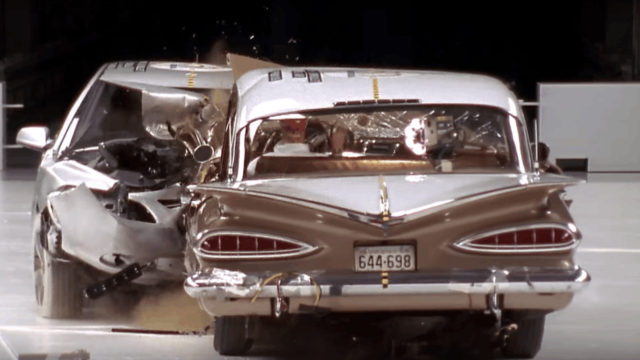 Old demo for an evergreen issue

Remember that time when the IIHS actually had fun on its 50th anniversary and orchestrated a crash test between a vintage Bel Air and a contemporary Chevy, in this case the 2009 Malibu? We still do.

On that note and with the Thanksgiving craze taking over the internet, let us say that if we're thankful for something the auto industry has done over the years, that something is safety measures, active or passive.

Now, back to the main issue here. When the IIHS crashed the two models, they were obviously after more than a good laugh.

Simply put, they did it so that every mortal with a driver's license should know that he's…well, temporary, and vintage cars, their charm aside, can become death traps in the event of a collision.

As you can clearly see, if a similar crash was to happen in real conditions, those sitting inside the Malibu would have the best chance of walking away from the accident.

As for the Bel Air's driver, well, the crash test dummy becomes sandwich filling between the seat and dashboard. But please, do head below and see for yourselves.