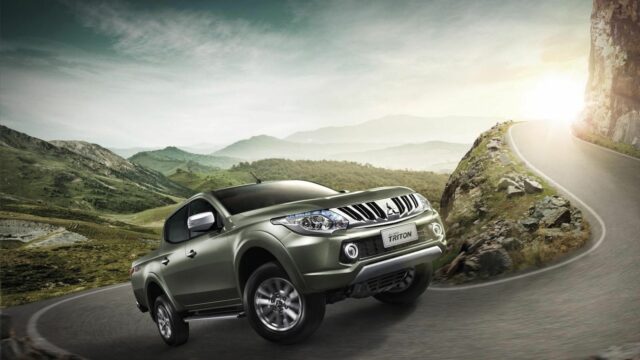 This is the new Mitsubishi L200, now at its fifth generation. The completely new pick-up will debut at the 2015 Geneva Motor Show in March and should arrive in European showrooms this summer.

The fresh L200 has a lower drag coefficient compared to the old model, and sports a chrome grille with LED daytime running lights.

Inside, there’s a new dashboard, with familiar cues borrowed from the likes of the Mitsubishi Space Star, and the top trims will offer stuff like GPS navigation, leather seats, DAB radio, dual-zone climate control and keyless start.

The double cab model measures 5,205 mm in length, which makes it pretty long, but that shouldn’t really be a problem in tight spaces because Mitsubishi says the new generation L200 has a class-leading turning circle of just 5.9 meters.

There are two transmissions available – a six-speed manual or a five-speed automatic with paddle shifters on the steering wheel. Also, you can get a center diff lock and a rear axle differential lock.

Last but not least, the electronically controlled Super-Select 4-wheel drive system offers several driving modes that can be operated via a knob between the front seats: 2H (rear-wheel drive only), 4H (4×4 with high gearing) and 4L (4×4 with low gearing), with the option to lock the center diff.