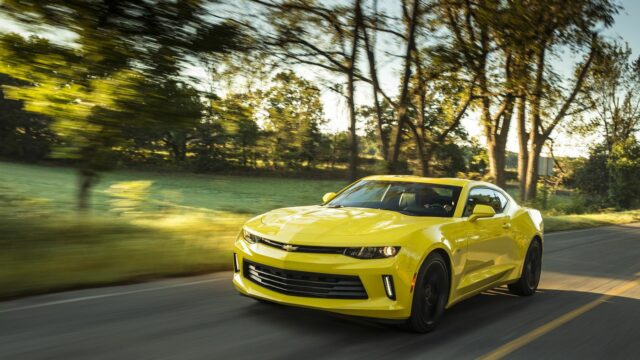 Bumblebee is not fat anymore. This is the first thing you get to notice when you’re looking at it: the new Chevy Camaro gets rid of the round, massive bodybuilder silhouette, adopting a sleek design of a rather fit sporty guy. Time has changed, and fit is the new trend.

That is shown not only by its new design lines but by the scale as well: the new Camaro is about 90 kilograms lighter than its predecessor, making use of the lightweight aluminum compound. Albeit its lack of mass, the structural rigidity was increased by 28 percent.

“The driving experience is significantly better,” says Aaron Link, lead development engineer at Chevrolet. That means that even with the turbocharged four-pot it’ll still feel like a proper sports car. Yes, Camaro can have an inline four engine tucked under its bonnet.

Moving on to the bigger brothers in the Camaro’s engine family – the new Camaro is available with the 3.6L aspirated V6, now delivering 335 horsepower (250 kW) and 284 lb-ft of torque (385 Nm), the highest specific output of any natural aspirated V6 in the segment, as Chevy reckons. And, for the first time, has an Active Fuel Management system that shuts down two cylinders under light throttle applications to enhance efficiency.

Camaro SS, the sleek-but-still-bad-to-the-bone Chevy, makes use of the 6.2 liters LT1 V8 engine (the same you encounter under the hood of the Stingray) with its 455 horsepower (339 kW) and 455 lb-ft (617 Nm). Despite its demonstrated sheer force, the V8 also uses Active Fuel Management, because fuel consumption is nowadays as important as power ratings.

The engines move the back wheels via a six-speed manual transmission or the Hydra-Matic 8-speed automatic box. The entry-level 2.0L is associated only with the manual while the other two versions are available with manual and auto box.

A part of “significantly better driving experience” claimed by Chevrolet are the suspensions – the rear axle gets a five-link independent system, while the front has multi-link MacPherson-type struts – that can be augmented with the Magnetic Ride Control, an active suspension that reads road and driving conditions 1,000 times per second and adjusts the damper settings to optimize ride comfort and control.

The interior follows the queues of the exterior design – simple yet instantly recognizable, with the dual-binnacle-style instrument cluster hood, only now it’s technologically updated, with an 8-inch-diagonal centre screen (between the rpm and speed gauges) that serves as the interface for the enhanced MyLink system.

The centre eight-inch screen provides additional information including navigation, performance, and infotainment features. Although the upgraded interior is more spacious and more upmarket, the purists will find something missing: the handbrake lever. The new Camaro switches to the electronic parking brake, so no more classic old school handbrake honing for you, guys.

But there’s a Drive Mode Selector Switch that will tailor the look, sound and feel of your new Camaro: you can choose between Snow/Ice, Tour, Sport and Track (available only for the SS), and each of the selection comes with specific responses of the steering, pedals, electronic aid and ambient light in the interior.