A worthy adversary for the Mercedes-Benz E-Class

BMW officially brought to light the new 5 Series Sedan, which will take a bow in the metal at this year's Los Angeles Auto Show.

BMW looks to gain momentum in the race against Mercedes-Benz and its freshly-released E-Class executive sedan. And just like the silken Merc, the seventh-generation BMW 5 Series takes a lot after its brother, the larger BMW 7 Series.

Through the use of high-strength steels, aluminum and carbon fiber, the new BMW 5 Series weighs up to 100 kg (220 lb) less than the model it replaces. 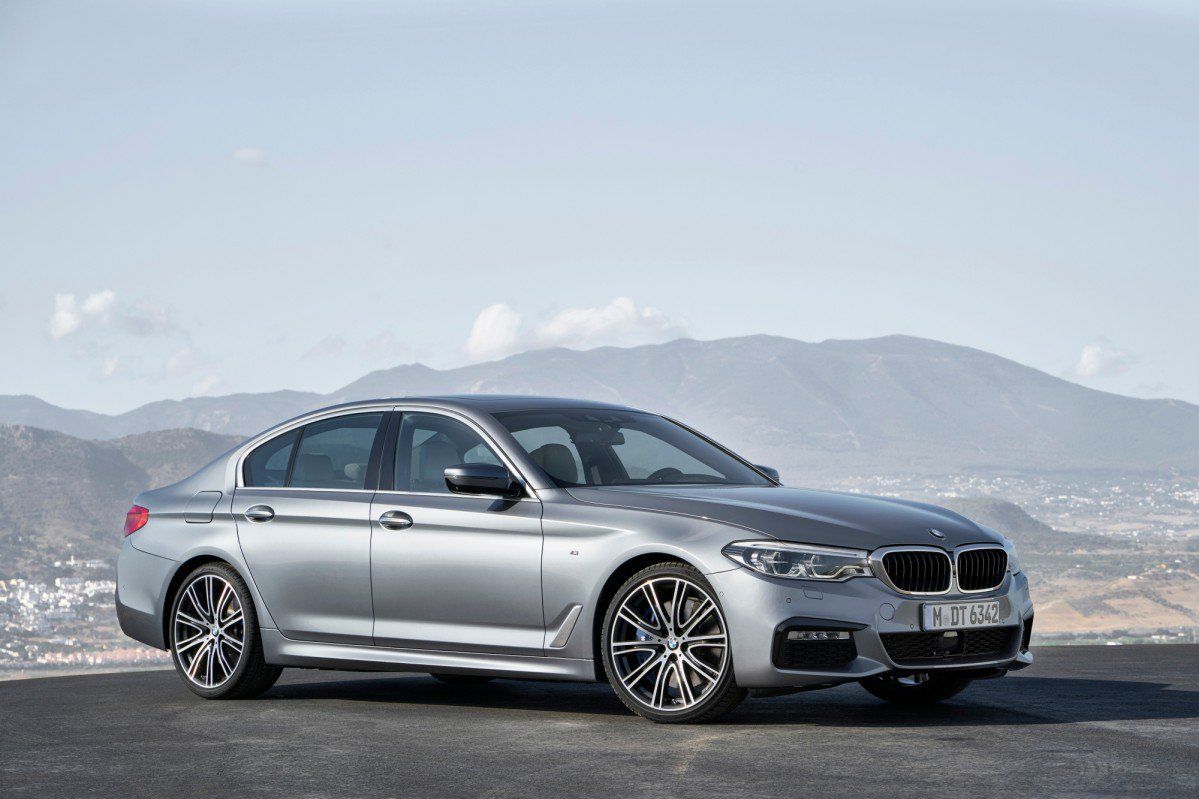 At the rear, the LED taillights replicate the traditional L-shape and are now reaching deeper into the sides of the car and the tailpipes (circular, trapezoidal or rectangular and in a quartet) are symmetrically placed on both sides rather than grouped together as seen on the current BMW 5 Series. The aerodynamic coefficient (Cd) was improved by 10 percent to 0.22 via air curtains in the front apron and air breathers in the wheel arches, just like the BMW 7 Series. Furthermore, every new 5 Series comes with an active flap control system for the radiator grille.

On the graphical side, BMW offers 21 exterior colors and 17- to 20-inch sized alloy wheels for the new 5 Series.

The 7 Series' influence is most visible inside the new BMW 5 Series, where BMW installed standard electrically-adjustable seats with massage function and optional sports seats.

BMW also claims the new 5 Series features increased legroom, kneeroom, and headroom for those sitting in the back, while boot capacity stands at 530 liters - that can be increased as the rear seat folds flat in a 40/20/40 split. Soundproofing is based on a new acoustic concept which sees sound absorbers integrated into the headliner coupled with additional glazing for the windscreen.

The new BMW 5 Series is to the 7 Series what the Mercedes-Benz E-Class is to the S-Class. Therefore, the technology bundle BMW took from the 7er and donated to the 5er is a rather extensive one.

Opening the ceremony is the gesture control setup for the car's essential functions (also premiered by the 7 Series). Features like the 3D-graphic navigation, telephone, music and so on are brought to the user by a 10.25-inch center-mounted display via iDrive controller interaction or through gestures, voice controls or touch commands directly on the screen. The HUD (Head-Up Display) feature displays a resolution of 800x400 pixels and a projection area which is 70% larger than in the preceding BMW 5 Series.

Two-zone auto climate control comes as standard, but that can be optionally upgraded to a four-zone setup with a designated console for those sitting in the back seat and the Ambient Air pack which keeps the air fresh inside the cabin and also scents it if necessary.

Sound is delivered through an optional 1,400-watt Bowers & Wilkins system (a premiere for the 5 Series), but buyers can also choose a Harman Kardon 600-watt setup. Additionally, the 5 Series was granted the Remote Control Parking tech initially introduced by the BMW 7 Series, together with the optional smart Display Key. Scratching the surface of autonomous driving is the steering and lane control assistant, which according to BMW, "features a high level of automation." What it basically does is apply steering interventions to keep the car in its current lane at speeds between 0 and 210 km/h (130 mph).

The 5 Series 520d/520d xDrive - which also happens to be the most thrifty choice in the range - relies on a 2.0-liter four-cylinder diesel aggregate mated to a six-speed manual or an eight-speed Steptronic automatic gearbox. The wide audience will get the chance to see and feel the new BMW 5 Series next month, as the sedan makes an appearance on the stage at the Los Angeles Auto Show. Prices are expected to surface in early 2017.