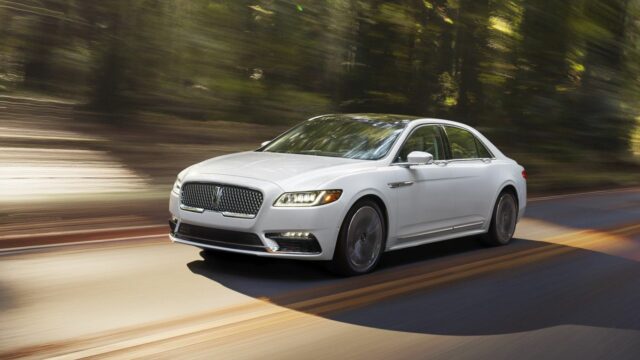 Ford's luxury brand has used the 2016 Detroit Motor Show to unveil its all-new Continental sedan, which had been previewed at the 2015 New York Auto Show by a namesake concept.

As expected, the production model doesn't differ very much from the design study. The proportions remain unchanged, and the shape of the headlights and taillights is similar to the concept. The bumpers are different, though, featuring bigger air intakes at the front and less dramatic exhaust outlets at the rear. The brand's new signature grille retains the same shape as on the concept, but the mesh model is slightly different. Finally, the study's chrome liner along the bottom of the car has been removed.

The door handles integrated in the chrome belt line are rather intriguing: not only they are placed higher than on most vehicles but also are fitted with new E-latch door releases. Passengers will have to touch a button to open the doors then use available power-cinching technology to close and secure them automatically. One can't help but wonder how dependable this system will prove to be with time.

The 2017 Continental is available with a panoramic sunroof that covers nearly the entire roof area. The front half slides up and over the rear, creating a large opening above the interior. The cabin's layout is the same as on the concept car, except the flashy bits that have made way for classier, more understated trim. The cabin features include leather seating, leather-wrapped console, and instrument panel, unique stitching, genuine wood or aluminum trim.

Lincoln is proud of the Continental's "Perfect Position Seats" inspired by private jets and high-end office furniture. The seats adjust up to 30 ways, with available features including massage, heat and cooling, as well as independent thigh extensions. At the rear, available equipment includes audio and climate controls, sunshades, and reclining, heated, cooled and massaging seats. The optional Revel audio system was developed to work in concert with the interior design and acoustics, offering three distinct listening modes – Stereo, Audience and On Stage.

For those who want to personalize their Continental to a higher degree, the automaker offers three Lincoln Black Label designer themes: Chalet, Thoroughbred and Continental-exclusive Rhapsody.

The big flagship sedan features an all-new twin-turbo 3.0-liter V6 gasoline engine. Designed exclusively for Lincoln, the unit produces 400 hp and 400 lb-ft of torque. There's no information yet regarding the transmission, but we do know the Continental is a front-wheel drive car, which is rather strange for this segment. However, Lincoln will offer an available all-wheel drive system paired with Dynamic Torque Vectoring.

The driver will be able to alter ride and handling via the Lincoln Drive Control system, which offers three settings (comfort, normal and sport) for steering and suspension. There's also available adaptive steering.

As all full-size luxury sedan nowadays, the 2017 Continental is packed with technologies. Driver assistance systems include Pre-Collision Assist with Pedestrian Detection, adaptive cruise control, and a 360-degree camera system, among other feature.

The 2017 Lincoln Continental will be built at Flat Rock Assembly Plant in Michigan and goes on sale in fall 2016 in North America and China.