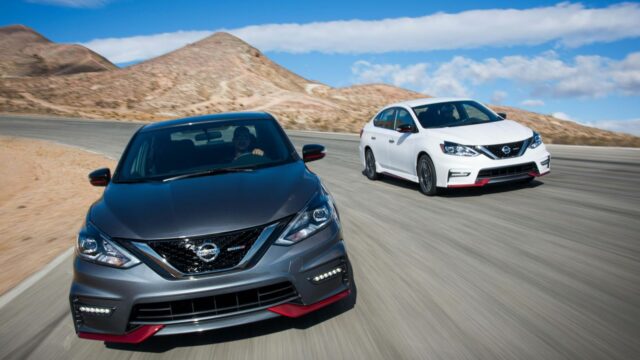 As of today, Nissan's Nismo-badged lineup in the Unites States has four aces: GT-R, 370Z, Juke, and for the first time, Sentra.

The 2017 Nissan Sentra Nismo was presented at the Los Angeles Auto Show but in untypical Nismo fashion, didn't qualify for a power bump.

Instead, Nismo engineers focused on the sedan's dynamic abilities by tweaking the body structure for a stiffer ride while also throwing a "unique suspension tuning" into the mix, which probably lowers the car and wipes out body roll.

Behind the frowning front spoiler and V-shaped grille lies a 1.6-liter direct-injected gasoline unit soaked with 188 hp and 177 lb-ft of torque – identical to Nissan's other sporty-wannabe Sentra, the SR Turbo.

Drivers can stir those resources using a six-speed manual gearbox or a tuned version of Nissan's Xtronic transmission.

"It's important to offer a 6-speed manual transmission with the new Sentra NISMO, both to reinforce its pure performance credentials and to up the direct engagement factor between driver and the vehicle."