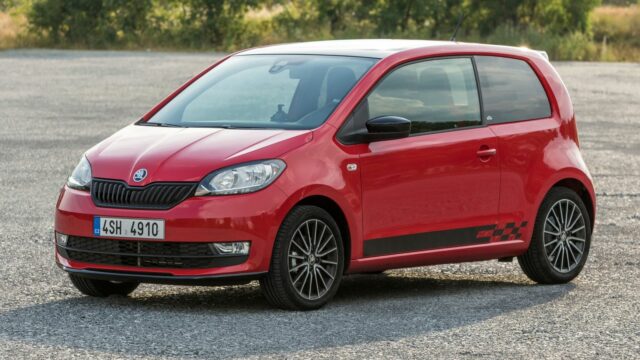 The Czech automaker has given its smallest model a series of styling, equipment and trim updates for the 2017 model year, including the addition of a rally-inspired Monte Carlo Edition.

As before, the Citigo is available either as a three-door or five-door hatchback, with four trim levels (Easy, Active, Ambition and Style) — the difference is there are now two new special editions (Monte Carlo and Fun).

Styling changes are subtle, with the Citigo gaining a revised front section that includes a new bonnet, a modified bumper, new fog lights with available cornering function, and a redesigned grille. In addition, the headlights now feature LED DRLs (standard on Ambition, Style, and Monte Carlo, optional on Active), and can be combined with the City Safe Drive light and rain sensors as well as Light Assist with Coming Home function.

Changes are less significant at the rear and include dark-framed taillights (from Ambition upwards). Depending on the trim level, the 2017 Citigo can also be had with white or black roof and side mirrors, with the refreshed minicar also offering new 14-, 15-, and 16-inch alloy wheel models.

The cabin remains as spacious as before (for a minicar, at least) and gains a new design for the instrument cluster, a multifunction steering wheel, as well as the new-generation Blue and Swing radio and infotainment systems.

The 2017 Skoda Citigo continues with the same engine lineup it shares with the VW up! and SEAT Mii consisting of three 1.0-liter three-cylinder gasoline units with outputs of 60 hp, 68 hp (CNG) and 75 hp, each mated to a standard five-speed manual transmission or an available automated shift gearbox (ASG).

Moving on to the Citigo Monte Carlo Edition, it's a sportier version based on the Ambition trim level that features a 15-mm lower sports chassis, as well as more dynamic-looking body elements. Those include the bumpers, black treatment for the grille, roof spoiler, and diffuser, as well as the 15-inch Crux alloys and tinted windows. Inside, the Citigo Monte Carlo features seat covers specifically designed for this trim level.