As with its predecessor, the 2018 Ford Fiesta ST is in the business of making the driver happy

The previous-generation Ford Fiesta ST was widely acclaimed as the B-segment's best hot hatch, and it was pretty clear for fans and automotive journalists alike that replacing it was not going to be an easy job.

And yet Ford has achieved just that, despite the fact that the changes brought by the third-generation Fiesta ST are significant on many levels. The new model scores several premieres for the nameplate. It's the first Fiesta ST model to feature a three-cylinder engine (and the first-ever from Ford Performance), the first one to feature driving modes and (optional) launch control, as well as the first Fiesta ST fitted with force vectoring springs and an available Quaife mechanical limited slip differential. But more on those goodies later. 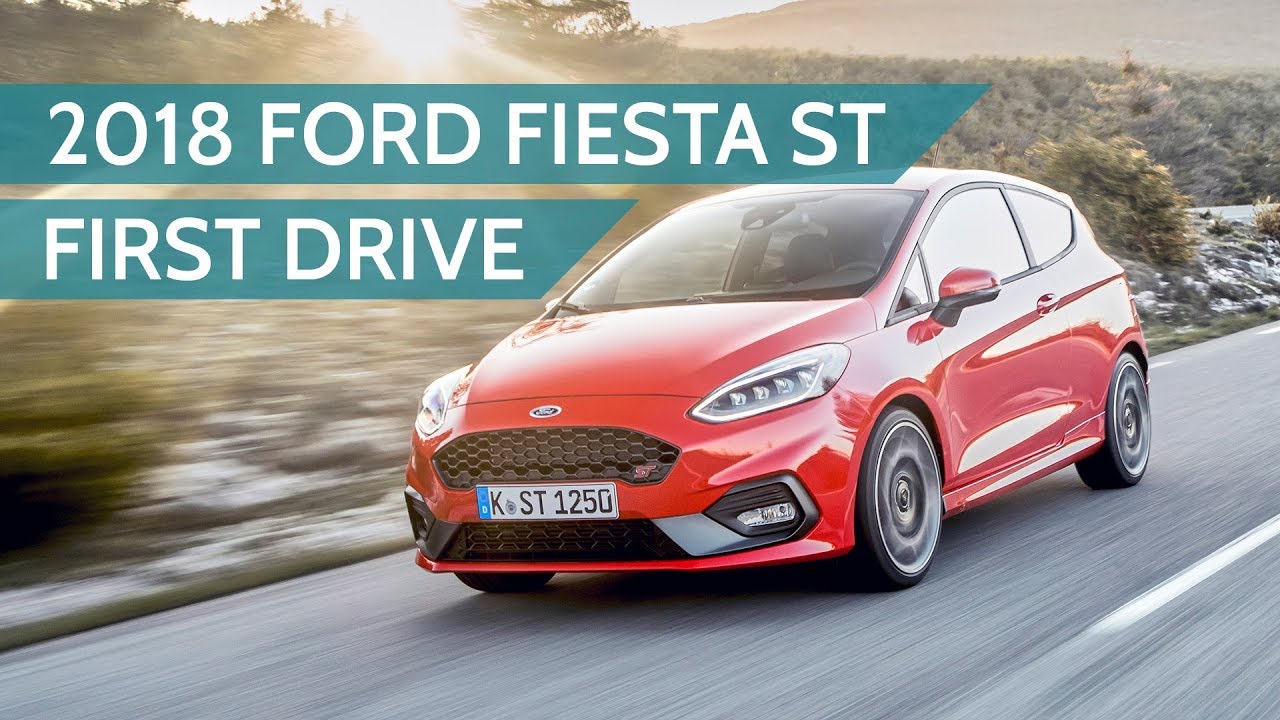 I must admit I approached the press drive event Ford held in the south of France with extreme curiosity, as the Ford Fiesta ST (old or new) was one of the hot hatches I had never had the opportunity to drive before. So I didn't judge the latest Fiesta ST based on its predecessor but rather its current rivals. Here are my observations after an exhilarating drive that covered 60-something kilometers of twisty mountain roads.

The little engine that could 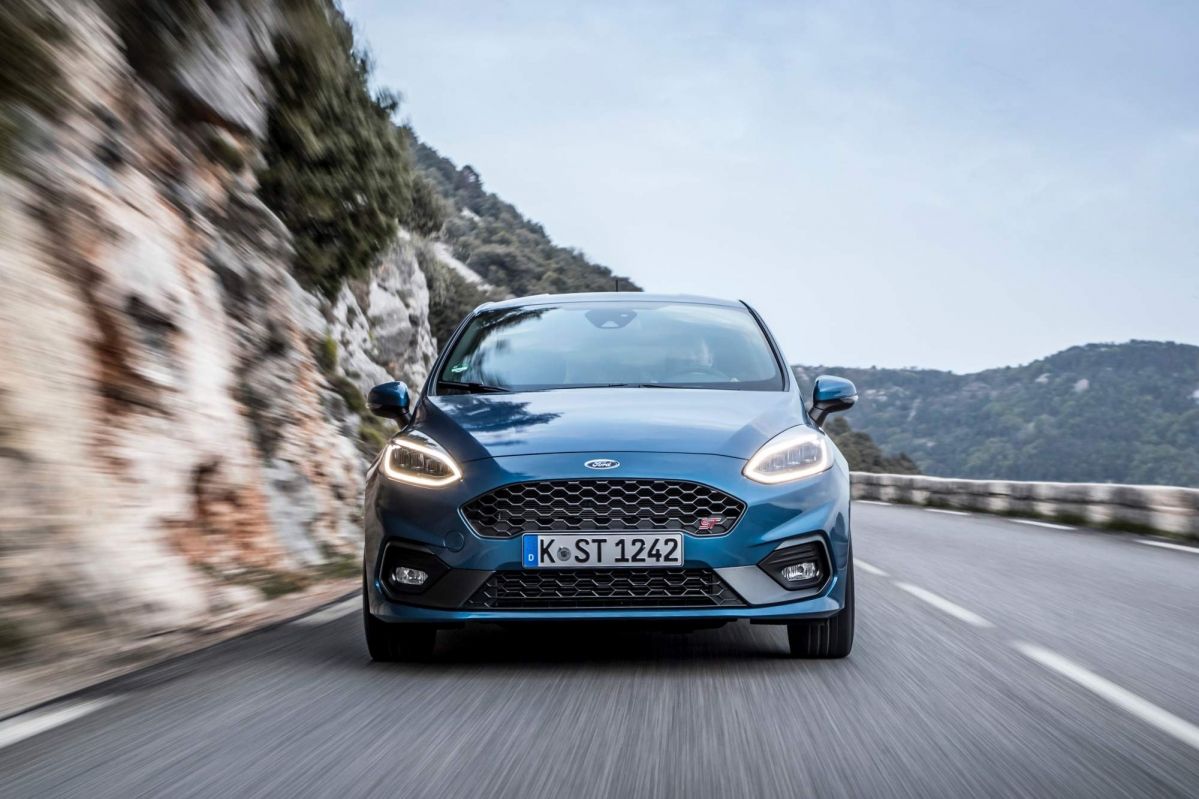 The main dish on the 2018 Ford Fiesta ST menu is the all-new 1.5-liter three-cylinder turbocharged gasoline engine that replaces the previous model's 1.6-liter turbo-four. Interestingly, the three-pot delivers the same power and torque as the outgoing Fiesta ST200 limited edition: 200 metric horsepower (197 bhp) at 6,000 rpm and 290 Nm (214 lb-ft) of torque between 1,600 and 4,000 rpm.

Mated to a short-throw six-speed manual transmission that is precise enough (but not perfect) the tiny engine feels like a much bigger power plant once you step on the gas. The torque delivery is instant, translating into a 0-100 km/h time of 6.5 seconds and, provided you're on the Autobahn or a race circuit, a top speed of 232 km/h (144 mph). The 0-100 km/h sprint is 0.2 seconds quicker than in the Fiesta ST200 and 0.4 seconds quicker than in the previous Fiesta ST. While these tenths of a second don't actually matter in real life, it's the accompanying soundtrack that makes you feel you're going quicker. 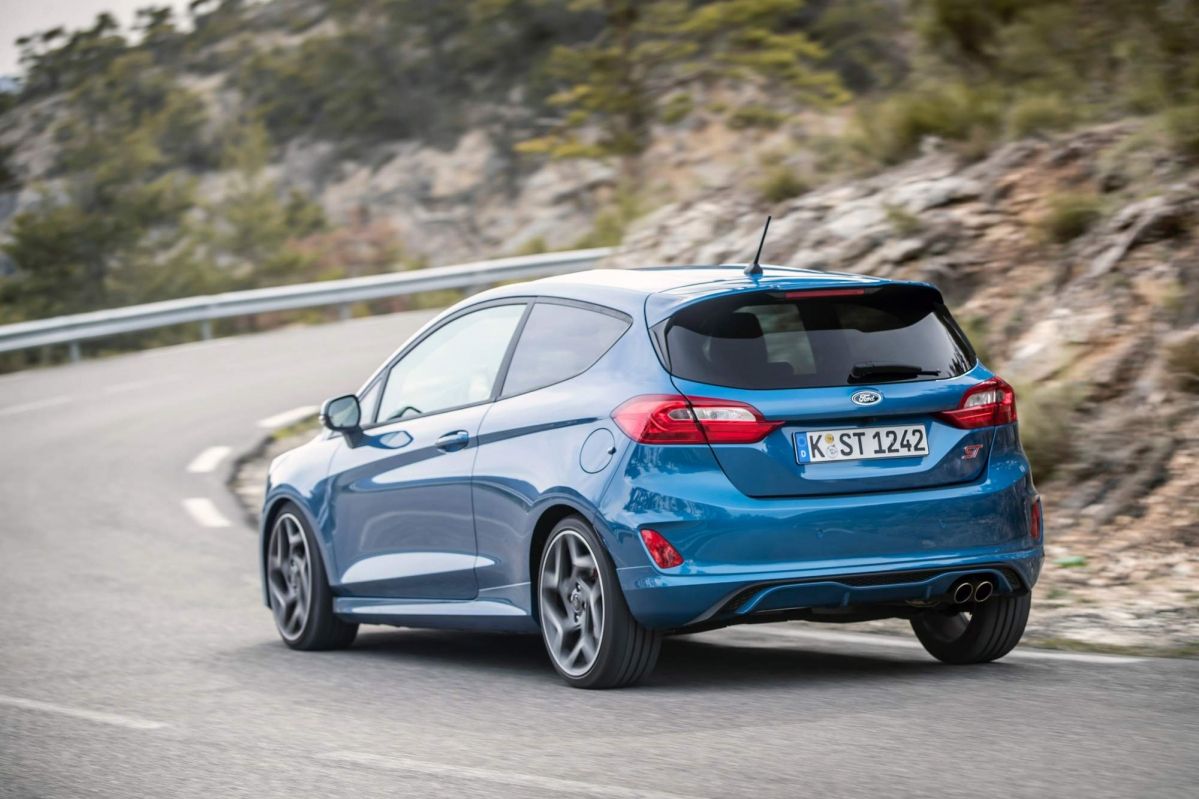 The three-cylinder engine emits a throaty, gruff noise that you instantly become addicted to, and that means you'll be keeping the rev needle in the red zone for as long as possible — especially since every sudden deceleration is followed by rally car-like pops and crackles from the exhaust.

Remarkably for a turbocharged three-pot, I didn't feel any turbo lag during driving nor any vibration at idle. I didn't detect when the cylinder deactivation system was doing its thing either — yes, when coasting or cruising with light demand on the engine, one of the three cylinders shuts down to improve fuel efficiency. 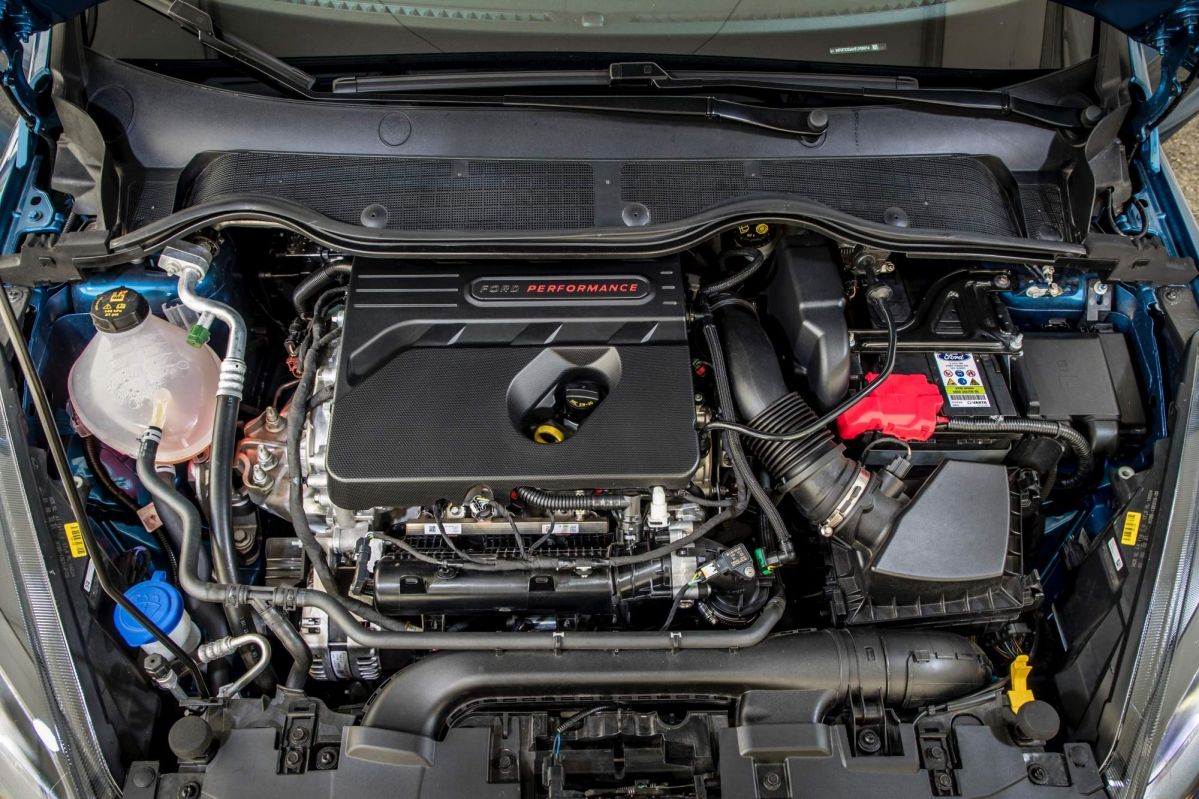 Ford claims the 2018 Fiesta ST averages 6 l/100 km and emits 136 g/km CO2, but at the end of the intense driving session that took place mostly on empty mountain roads, the trip computer showed 10 l/100 km. That's not bad considering the rev needle spent most of the time in the red zone. Under normal driving conditions, I believe the Fiesta ST can get quite close to Ford's claimed fuel economy. 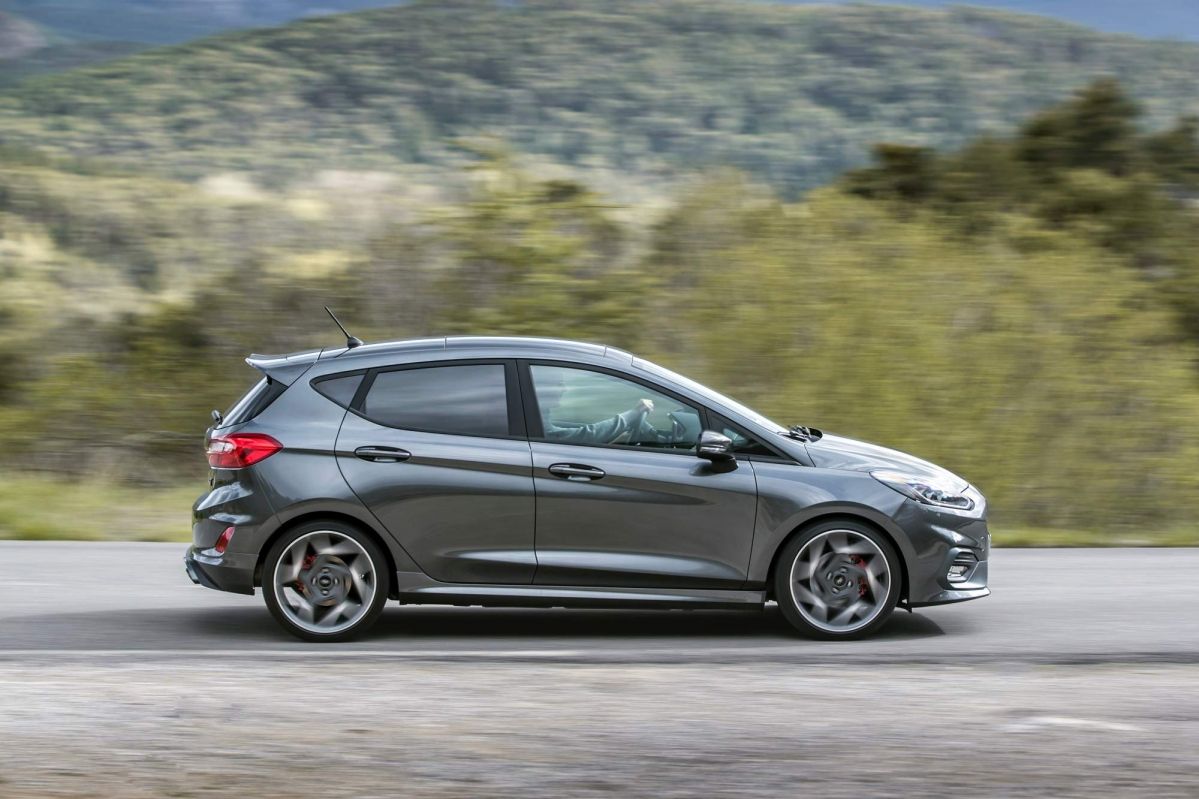 For driving nuts, the chassis is at least as important as the engine (if not more important), and the new Fiesta ST seems to have been developed with the goal of keeping the driver excited all the time. The Quaife mechanical limited slip differential (optional but fitted to the test car) finds grip where you don't think it's possible, and it works together with the standard torque vectoring system to make sure you can enter corners at ridiculous speeds and emerge alive at the other end. 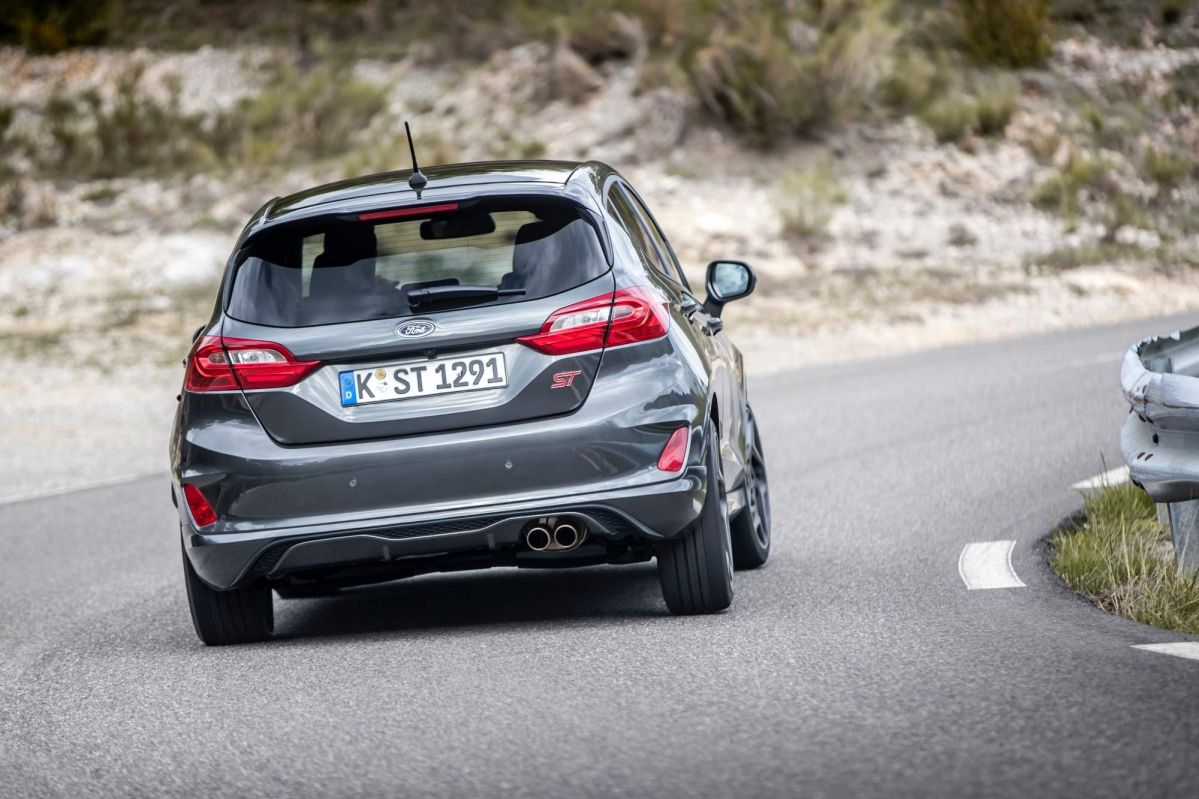 Honestly, it's quite difficult to unsettle the Fiesta ST in corners, and achieving that would require a commitment bordering insanity. The hot Fiesta feels so connected to the road also thanks to the new banana-shaped force vectoring springs on the twist-beam rear suspension that absorb lateral acceleration as well as vertical acceleration.

The steering feels connected enough, even though it can't completely shake off that "rubbery" feeling typical of electrically-assisted systems. It doesn't offer sports car-accuracy and feedback, but I can't say that bothered me too much on the road. It might become a problem on the track, though.

When you get tired of thrashing it, you realize it makes a great daily driver 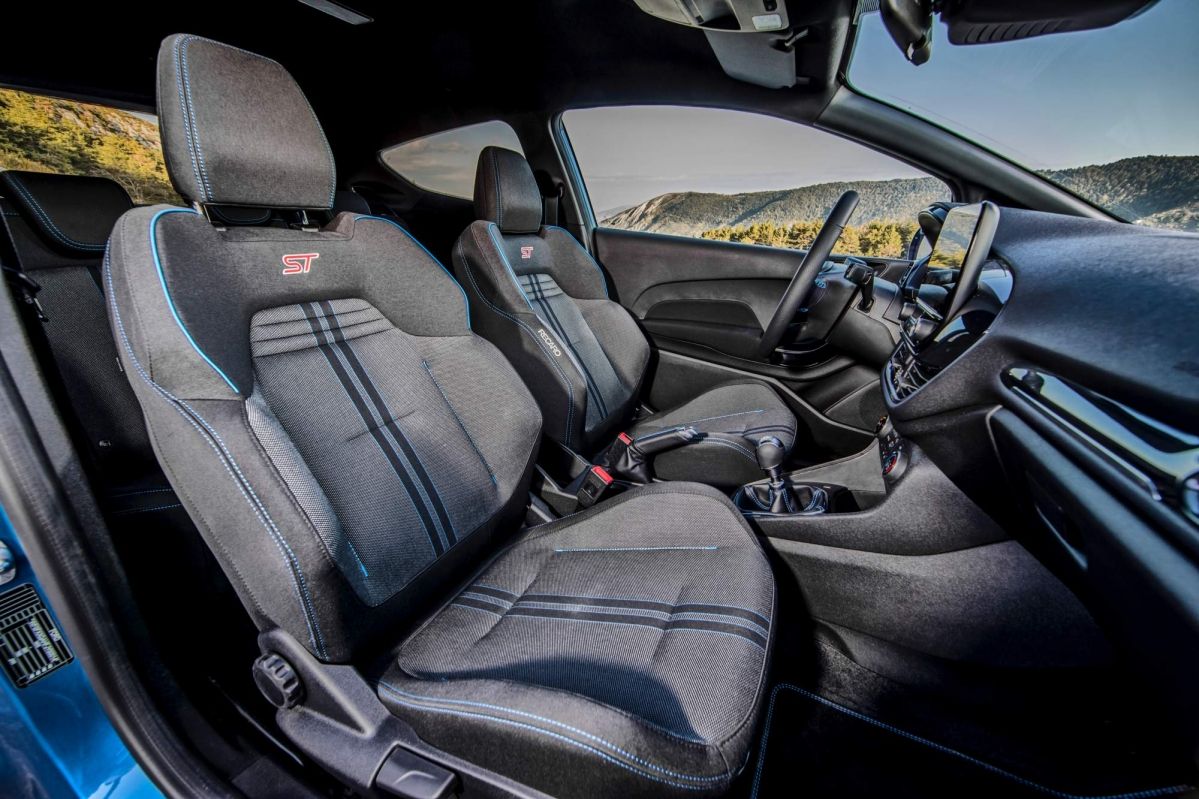 The Fiesta ST also offers driving modes for the first time, and that's something you'll thank Ford if you plan on using it as a daily driver. The Normal, Sport, and Track modes alter the car's behavior when it comes to engine, steering, and stability control systems.

Normal mode is what you'll use on a regular basis, and Sport is what you want to select for fast road driving, as the latter setting sharpens up the throttle response, engine mapping, and the steering to allow for finer control. Furthermore, the active noise control valve opens to let out a sportier exhaust note. Ford doesn't say if more noise gets pumped out through the speakers too — yes, the ST uses this trick which I find useless because the new 1.5-liter EcoBoost produces a satisfying amount of noise on its own. 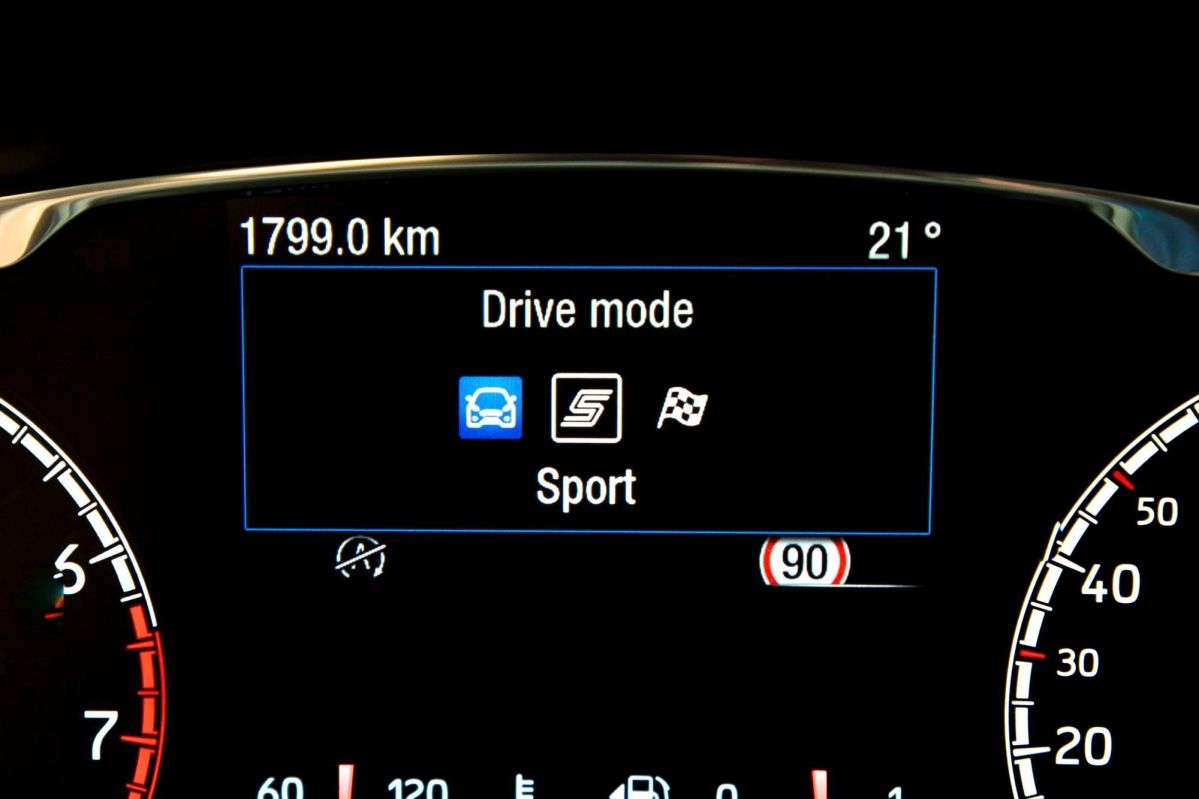 As its name suggests, Track mode is designed for achieving the fastest possible lap times, and selecting it disables the traction control system and sets Electronic Stability Control interventions to wide-slip mode. By the way, the ESC offers three modes of its own: full system intervention, wide-slip mode with limited intervention, and full system de-activation. Don't use the latter setting unless you are on a track and know what you're doing. 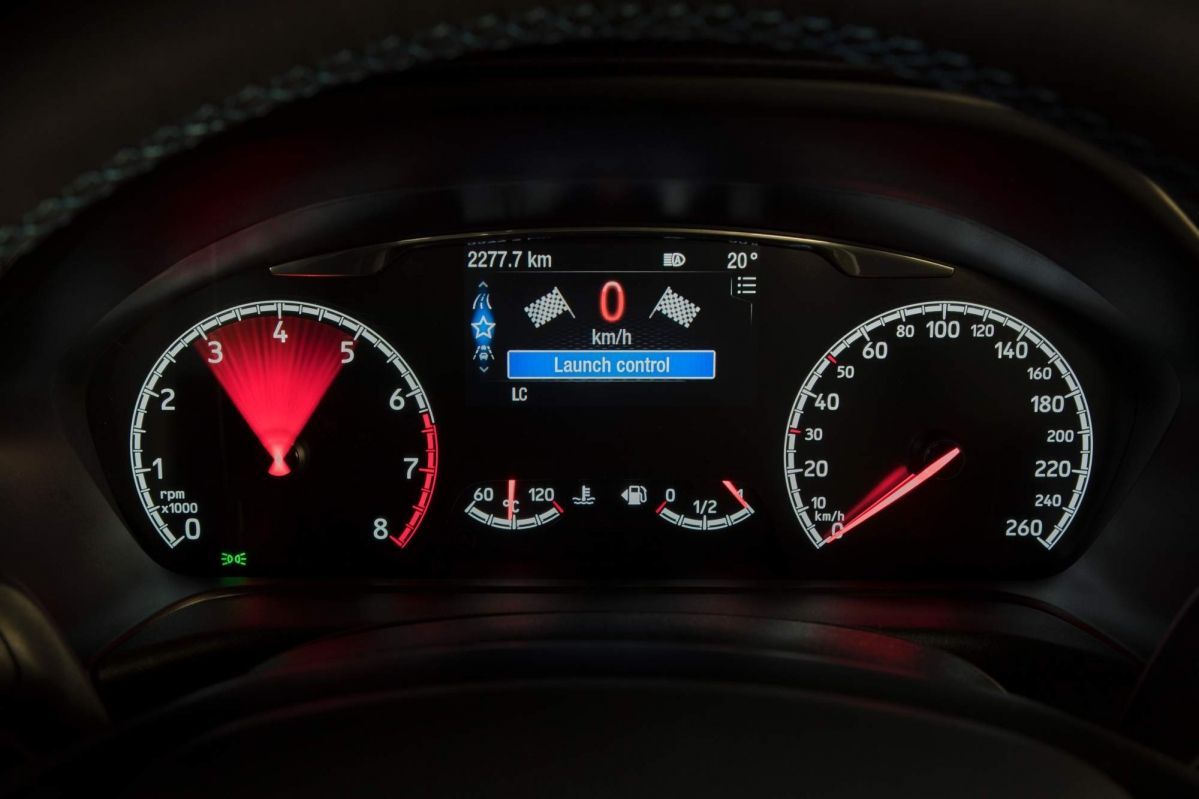 Also recommended for track use only is the Launch Control system, another first for the Fiesta ST. Both you and I know it will be mostly used at the stoplights, though. Regardless of the selected driving mode, the damping is definitely on the firm side, but it never feels excessively harsh. So yes, you can use the Fiesta ST as a daily driver, no worries about that.

The B-segment hot hatch to beat 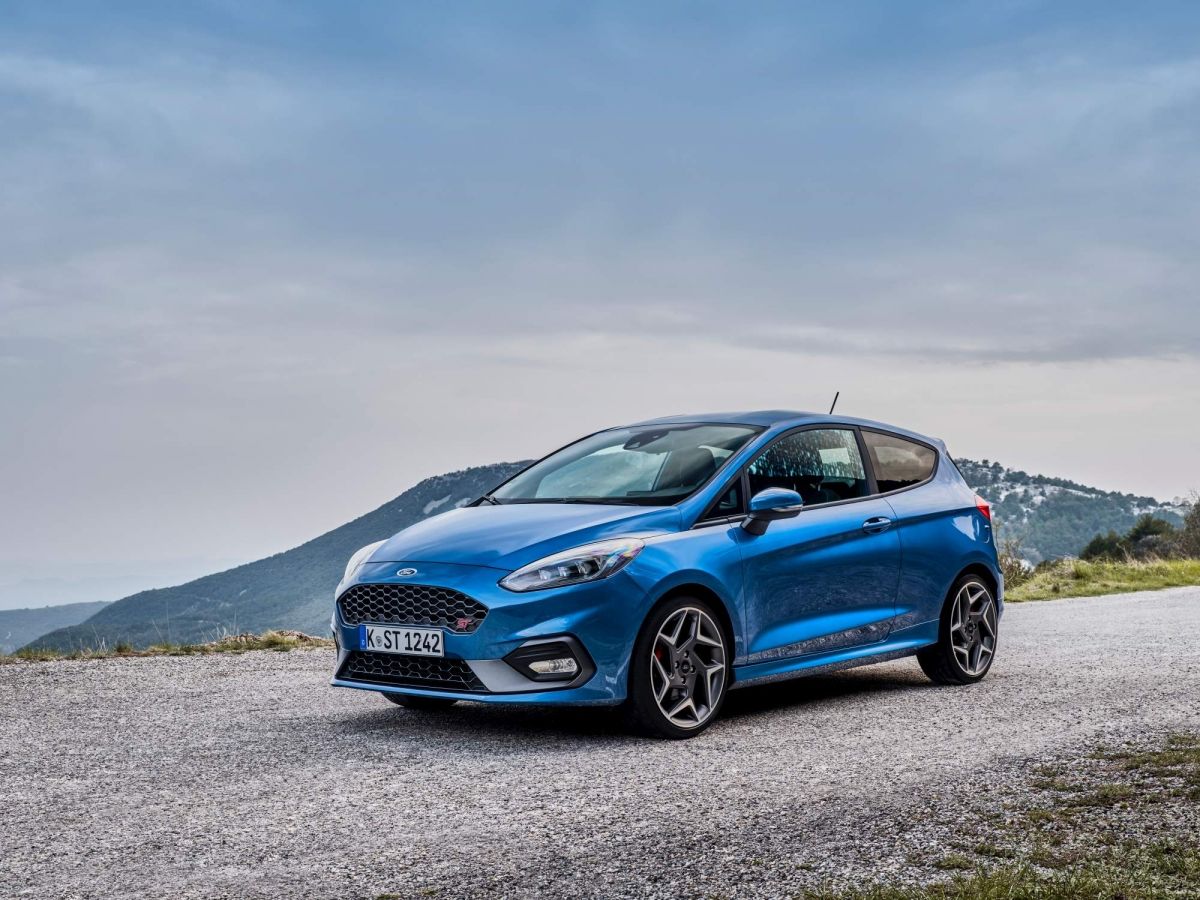 While I haven't sampled some of the newest B-segment hot hatches, such as the VW Polo GTI, Toyota Yaris GRMN, and Suzuki Swift Sport, I've had more than one go in the Fiesta ST's traditional rival, the Renault Clio RS (including in hardcore Trophy guise). What I can say is the little Ford put a bigger smile on my face.

With the latest turbocharged three-pot, the Fiesta ST has more character without losing anything performance-wise (quite the contrary), while the new hardware implemented to the chassis makes it an absolute hoot to drive on twisty roads. Okay, it might not look that different to the regular Fiesta (especially the ST-Line), but that may be an advantage for those who prefer a more understated appearance. 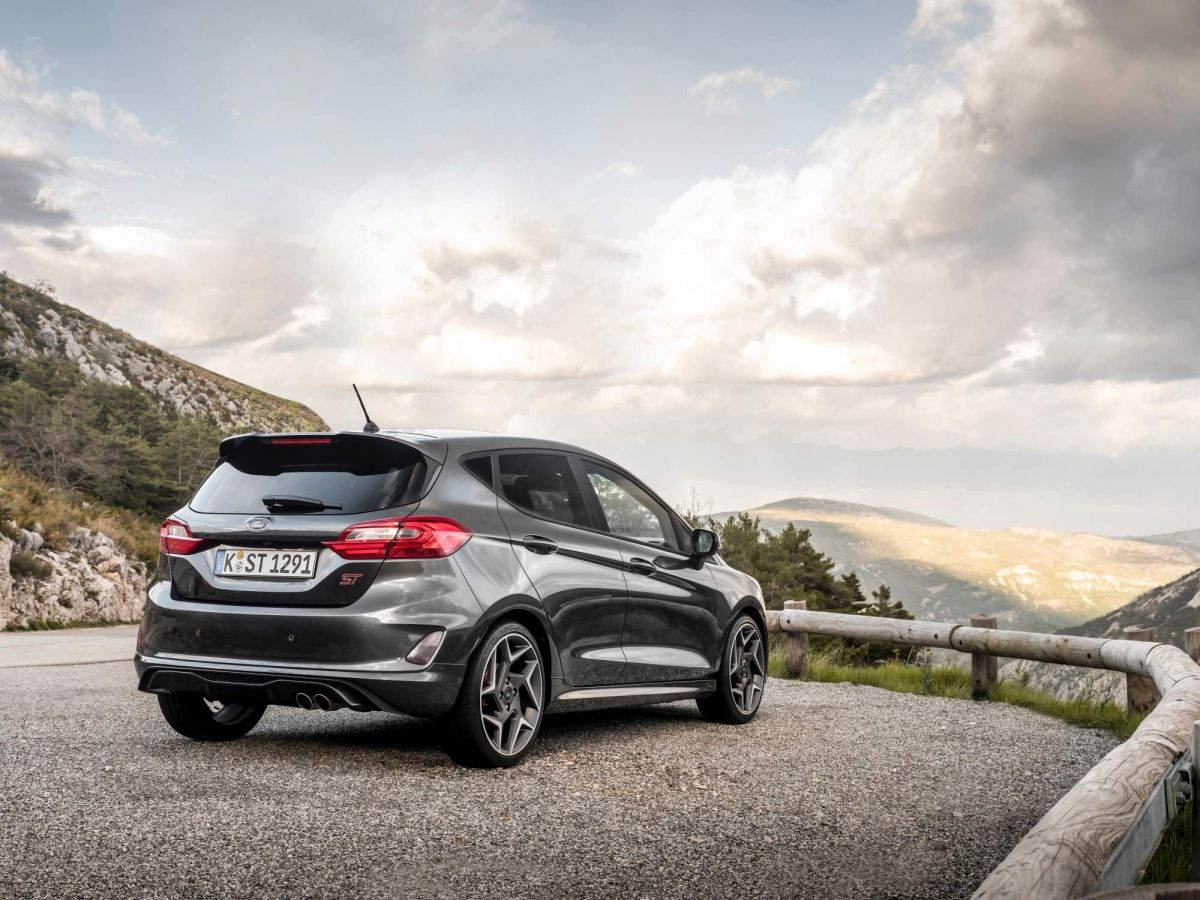 Add to that the €22,100 starting price (in Germany), and the Fiesta ST already looks like a winner: it's almost two grand cheaper than the Polo GTI, and it undercuts the Clio RS by approximately €1,600. Even if you order your Fiesta ST in a five-door body style (for an additional €800), it's still cheaper than those cars. And more fun.