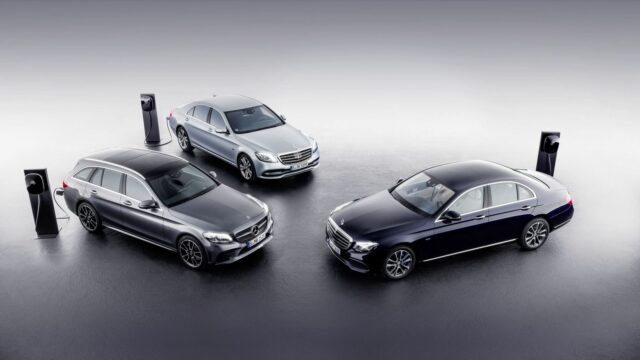 Mercedes-Benz tries to show the world the diesel engine is not dead yet, with two plug-in hybrids that trickle down the tech already presented on the S 560 e to the C-Class and E-Class

Remember the incredible Mercedes-Benz S-Class 560 e? It sports a 367-hp V6 (in Europe) or a 463-hp V8 (in the USA) combined with 90 kW electric motor which adds 400 Nm (324 lb-ft) of torque, for a combined fuel consumption of 2.1 l/100 km (112 mpg!) and combined CO2 emissions of 49 g/km). Well, Mercedes-Benz just showed up at the Geneva Motor Show with two preproduction C-Class and E-Class plug-in diesel hybrids that use the same electric motor to pump-up their performance while returning extremely low consumption figures.

The hybrid system will combine Mercedes-Benzes all-aluminum OM 654 four-cylinder diesel engine with the latest-generation 9G-TRONIC 9-speed hybrid transmission to lower or eliminate local emissions and enhance dynamics once out of the city. The new diesel four-pot already has some of the lowest CO2 and microparticles emissions due to some really interesting innovations detailed in the video below.

The plug-in hybrids will also get the additional 90 kW electric output and electric torque of 440 Nm for a total combined torque of 700 Nm (available from 1,400 rpm) – Mercedes-Benz will announce final specs according to each power level for the diesel engine. The electric range is around 50 km in the NEDC, due to a 13.5 kWh lithium-ion battery, while the top speed in e-mode has been raised from 130 km/h to 140 km/h. There's also a new onboard charger that doubles the charging rate from 3.6 kW to 7.2 kW, enabling a complete recharge in just two hours at a wallbox or around seven hours with a conventional domestic power socket. The high-voltage onboard electrical system supplies not only the powertrain components but also the electric refrigerant compressor and the high-voltage heater booster. Both allow pre-entry climate control of the interior not only in summer but also in winter.

The car also uses data from the navigation system and information from the camera and the radar sensor to adjust to the specific speed/route profile. Events such as negotiating towns on the way to the destination are taken into account when planning the available electrical energy, and during recuperation and thermal conditioning of the drive components.

The driver is also assisted in his/hers eco-driving by a host of new features. For example, the car will indicate to come off the accelerator pedal when approaching a speed limit or start coasting and recovering energy as soon as possible, using navigation data, traffic sign recognition and the radar and camera system onboard. The ECO Assist system takes into account things like the route profile (bends, junctions, roundabouts, gradients), speed limits, the distance from the vehicles ahead and computes whether the vehicle should ideally be allowed to coast with the lowest possible driving resistance with the driver's foot off the pedals, or whether it should be decelerated so that the battery can be efficiently charged.

Within the limits of the system, ECO Assist controls the overrun mode according to the situation as soon as the driver takes their foot off the accelerator. The driver is also given a visual prompt to do this: by a "foot off accelerator" symbol in the central display (or, if installed, in the head-up display). At the same time, a diagram gives the driver the reason for the recommendation (e.g. "Junction ahead" or "Gradient ahead").

To increase the driver's motivation to follow the recommendations of ECO Assist, the on-board computer records how many kilometres/for how much time during a journey the car was driven with the engine off, and shows this in the central display. The reward not only takes the form of reduced fuel consumption, but also an increased electric range.

The driver can also choose between four operating modes:

There's also a new-generation of Mercedes-Benzes wallbox: with up to 22 kW, the home charging station is now more powerful and makes it possible for the first time, among other things, to control various functions from a smartphone. These include charging control, user management and consumption overview. It will be available for European customers from summer 2018 – more than 40 other markets will later follow. Customers can choose between three versions: the basic Wallbox Home, the internet-capable Wallbox Advanced and the Wallbox Twin for charging two vehicles at the same time.

READ MORE: These are the top 10 hybrid cars in Europe