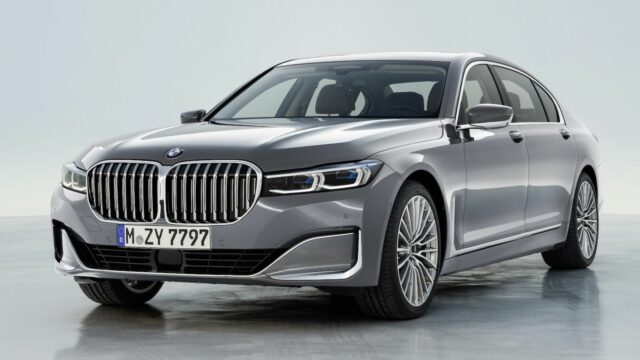 After leaks and some more leaks, the revised BMW 7 Series presents itself

After it skipped the facelift version and came up with an all-new X5, BMW was very close of pulling the same stunt with the 7 Series. It didn’t happen, but the brand’s flagship model has changed. A lot.

Most of the add-ons involve the design bit, although the Germans made sure the tech package gets tweaked, as well as the engine lineup.

The front end is now positioned 50 mm above the ground at its tallest point, while the ginormous kidney grille is the result of a 40% increase in surface. BMW X7, anyone? But while the grille got bigger, the headlights turned slimmer. LED tech is standard, but customers can optionally get BMW Laserlight units with a high-beam range of up to 560 m.

Lastly, the air breathers that form the infamous golf club sit upright in the 7 Series’ side panels and are said to allow better air flow through them.

From the design standpoint, not much to mention, except for the redesigned leather steering wheel which sees a different button arrangement, while the wireless charging tray has been moved in front of the cupholders.

BMW says even less sounds will reach your ears inside the revised 7 Series thanks to “carefully executed refinements around the rear wheel arches, B-pillars, and seatbelt outlet covers” at the rear. In other words, thicker padding for better soundproofing.

How about the powertrain?

The plug-in-hybrid setup inside the BMW 745e and 745Le and 745Le xDrive makes 290 KW when the Driving Experience Control switch is set to Sport mode and provides an all-electric range of around 50-58 km (31-36 miles).

As far as the diesel range is concerned, BMW offers the 750d xDrive (294 kW, 400 PS, 394 hp) and 750Ld xDrive (same power and credentials) models – both rely on a three-liter, six-cylinder diesel engine fitted with four turbochargers.