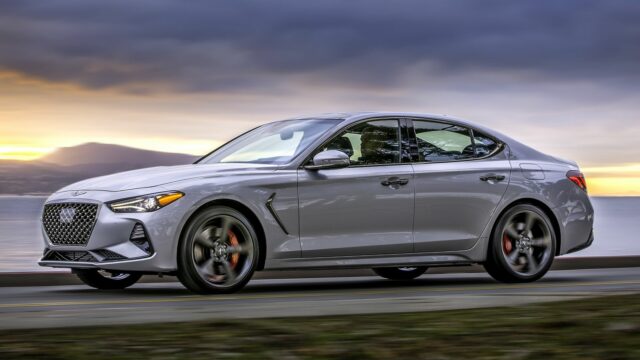 Out for German blood

The Genesis G70 was officially presented at the 2018 NYIAS with its makers revealing pretty much all there is to know about the BMW 3 Series/Mercedes-Benz C-Class fighter.

A previous report showed that the 2019 Genesis G70 will feature a six-speed manual on the rear-wheel drive model, which is confirmed by Genesis’ press blurb.

Moreover, the standard gearbox is an eight-speed automatic with steering wheel-mounted shift paddles and launch control. The manual mentioned above can be had only with the Genesis G70 2.0T RWD version.

The 2019 Genesis sits on MacPherson multi-link suspension up front and standard multi-link at the rear. Genesis says the suspension’s geometry is the performance-oriented kind and goes hand in hand with the weight-reduction measures which involve aluminum components and hood.

Customers will be able to choose the Dynamic pack which adds a mechanical limited slip differential. Models fitted with the 3.3-liter V6 also get variable gear ratio steering while the Sport trim further enhances the 2019 G70 with an electronically controlled suspension setup.

Brembo brakes on all four corners are optional and bring four-piston calipers up front and two-piston ones at the rear that bite into 13.8-inch ventilated front discs. Inside the cabin, the G70 offers a mix of brushed aluminum surfaces, Nappa leather seats and what Genesis calls “premium stitched soft-touch surfaces.”

The first batches of cars are expected to reach dealerships in summer.