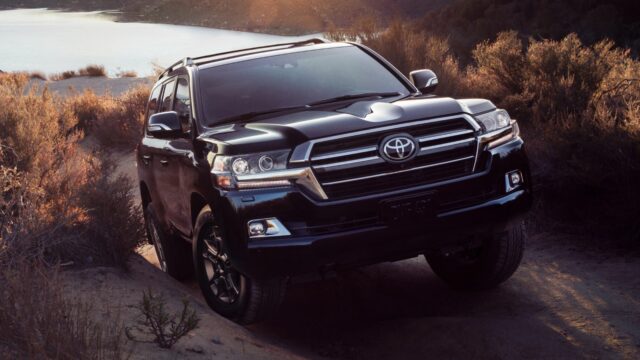 As hard as it is to believe, Toyota launched the Land Cruiser six decades ago and to mark the occasion, the Japanese have come up with the 2020 Land Cruiser Heritage Edition.

The Land Cruiser has been an integral part of Toyota’s US lineup since 1958, without interruption. So to mark that feat as well, Toyota will assemble just 1,200 Land Cruiser Heritage Edition models which are set to go on sale this summer.

Each 2020 Land Cruiser HE will come with just two rows of seats “to maximize cargo capacity,” says Toyota. In addition, every unit wears one of two body paint options: Midnight Black Metallic or Blizzard Pearl.

Rounding up the exterior look is a set of BBS 18-inch forged aluminum wheels that sport center caps with TOYOTA lettering.

OK, but are there any changes brought to the powertrain?

Mated to an eight-speed automatic gearbox, the powerplant sends resources to all four corners via a full-time 4WD setup which incorporates a Torsen limited-slip center diff and a two-speed transfer case with selectable low range.

So, how’s the treatment inside?

Not bad. Not bad at all. For this special-edition Land Cruiser, Toyota unlocked the likes of a heated steering wheel, power moonroof, four-zone climate control with 28 vents scattered around the cabin, a nine-inch infotainment setup complemented by a 14-speaker JBL sound system, voice recognition, Bluetooth and wireless phone charging.

The seats are covered in black leather with bronze contrasting stitching also present on the steering wheel, door trim, center stack, and console.

No word on pricing just yet, but Toyota says it will reveal those details prior to the model’s launch.

SEE MORE: 2020 Toyota Supra – everything you need to know about the engine