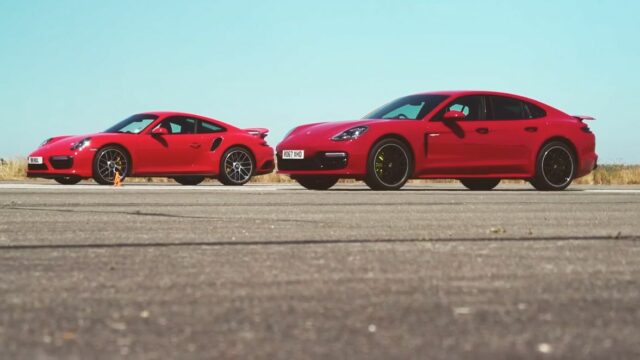 We can’t say we didn’t enjoy it, though

Drag races orchestrated by car journos usually involve rivals from two or more brands but in this case, the skirmish happens in Porsche’s own backyard.

Yes, the way Porsche’s Panamera Turbo S E-Hybrid drives is a clear reminder that the company that makes it built a solid reputation on a legendary model: the 911.

Pitting the two against each other, however, is something we didn’t quite imagine before. Until Autocar did it.

But before we let you soak up the video below, a few words (make that numbers) about the two cars.

The Porsche Panamera Turbo S E-Hybrid is the heavyweight here as it tips the scales at 2,310 kg due to all that fancy hybrid tech. In the opposite corner, the 911 Turbo S weighs in the region of 1,600 kg.

Who wins? We won’t tell, but the video will.