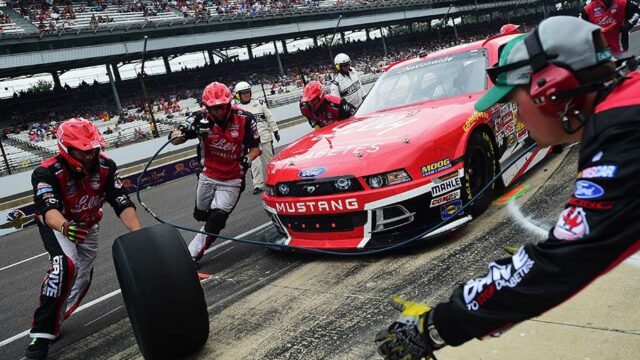 Everyone knows what they’re doing

Sure, some professional drivers can lose as much as 3 kilos during a race, but the pit stop team is a battalion of fitness.

Every racing team manager, be it Formula 1 or NASCAR that we're referring to, knows a pit stop can strike the difference between victory and a less fortunate place in the final standings.

In other words, it doesn't matter whether your driver is the fastest of the pack if the pit crew can't make things happen quickly.

Today's F1 pit stops linger on the two seconds mark, but in NASCAR, that time frame expands to 12 to 16 seconds for all tires and 22 gallons of fuel, whereas a stop for two tires and refuel usually takes between 5 and 7 seconds.

In this interval, the crew of six must change the tires and refuel the car. So, let's look at some figures, shall we?

Lifting the car with just one pump requires the jack man to handle 400 lb of force. Each impact wrench used to unscrew the wheel's bolts generates a hip-breaking 1,000 lb-ft of torque at 15,000 rpm.

Also, the crew resembles a task force squad as they train weekly to stay in shape, gain more strength and stamina. It's not rare that the members of a crew are former college athletes.

And to put things into perspective, consider this: back in 1940, the average pit stop time in NASCAR was somewhere around 40 seconds.

NASCAR fan or not, you'll also want to check out this close-shave drift at 200 mph or a short-lived but intense fist fight.