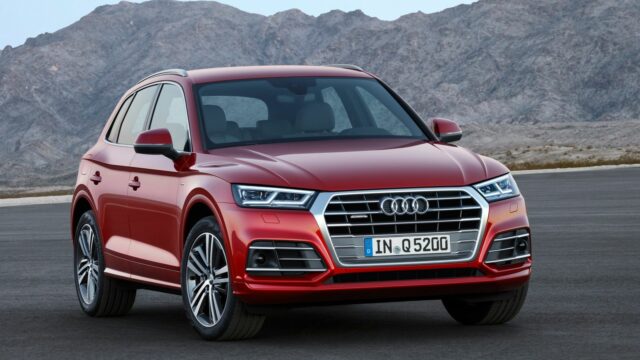 Audi has pulled the wraps of the second-generation Q5 mid-size SUV at the Paris Motor Show, with sales beginning in early 2017.

There are no surprises regarding the new Q5's exterior: it looks like a scaled down Q7. Featuring similar front and rear ends as its larger sibling, the Q5 looks sharper than its predecessor. It is available with two types of headlights: LED or Matrix LED with dynamic turn lights. The taillights are also available with optional dynamic turn signals. The 2017 Audi Q5 will be available in five equipment lines, each with a slightly different overall appearance.

Due to the increased dimensions, there's more space inside for five passengers and their luggage. The rear seat back is split into three segments, while longitudinal and seat back angle adjustment are optional. Depending on the rear seat position, cargo volume ranges from 550 to 610 liters (19.4 to 21.5 cu ft) — accounting for an increase of 10 liters over the previous model. When the rear bench is folded down, capacity grows to 1,550 liters (54.7 cu ft).

Inside, the new Q5 sports a similar dashboard with the latest A4 and A5 models, which is normal as they all share the same platform. The new SUV also gets MMI terminal in the center console, the optional Audi virtual cockpit with a 12.3-inch screen, optional head-up display, and more.

Engines are mated to either a six-speed manual, seven-speed S tronic and eight-speed tiptronic (exclusively for the 3.0 TDI). The quattro all-wheel drive system is standard on the 2.0 TDI with 163 PS and 190 PS, the 2.0 TFSI, and the 3.0 TDI.

The all-new Audi Q5 will be built in a new plant in Mexico and will arrive in European dealerships in early 2017 with a base price of €45,100 on the German market.