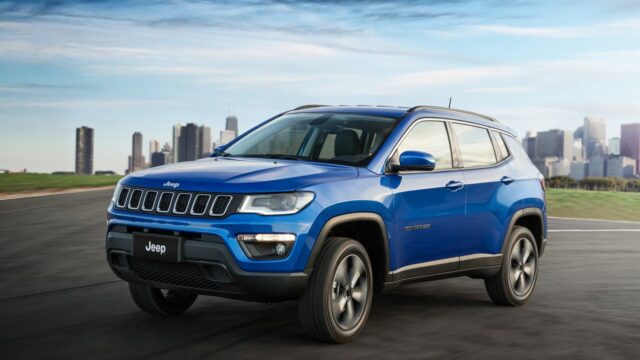 It replaces both the current Compass and the Patriot

Jeep has released the first photos and details of its all-new 2017 Compass global crossover, which will replace both the current Compass and Patriot in the automaker's lineup.

The first market to get the new Compass is Brazil, where Jeep has begun production at the new assembly plant in Goiana, Pernambuco.

Jeep wasn't very generous with the details but said the Compass would be sold in more than 100 countries around the world with a series of 17 fuel-efficient powertrain options. The North American debut of the all-new Jeep Compass will take place at the Los Angeles Auto Show in November, with the sales debut scheduled for the first quarter of 2017.

All we know is Jeep played it safe from a design point of view and combined design cues from the Grand Cherokee and the Renegade for the exterior, with the cabin looking very similar to the larger Cherokee.

In Brazil, the Compass is offered with four trim levels (Sport, Longitude, Limited, and Trailhawk), with prices starting from 99,990 Brazilian Reals (approximately $30,815 at the current exchange rates). Two engines are available, a 2.0-liter flex fuel gasoline unit mated to a six-speed automatic and a 2.0-liter turbodiesel linked to a 9-speed auto. Customers can choose from front- and all-wheel drive versions.

We'll learn more about the US-spec 2017 Compass as we get closer to its debut at the LA Auto Show.