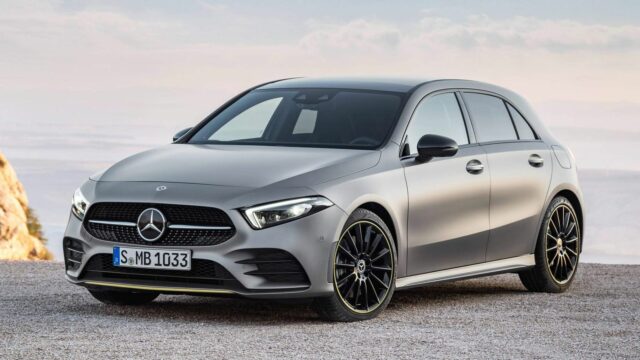 After a long wait seasoned with many teasers, the all-new Mercedes-Benz A-Class is here. The fourth-generation of Mercedes' compact hatchback sees improvements in areas that needed that but at the same time retains the main features that made the premium hatch a success in the first place.

It's safe to say the design won't take anyone by surprise — especially those who have seen some of our spy photos in the past. The 2018 A-Class is an evolution of the previous model as far as the styling is concerned. Highlights include the flat headlights (available with Multibeam LEDs) that remind of those fitted to the new CLS, the slim taillights, the reinterpreted radiator grille, as well as the flatter, more dynamic appearance.

That's not just an impression because the A-Class' proportions have been slightly modified. The new A-Class may look very similar to the outgoing model viewed from the side, but it has a 30-mm longer wheelbase and a more inclined bonnet. The overall length increases by 120 mm, the width loses 4 mm, and the height grows by 7 mm.

According to Mercedes-Benz, these changes result in a roomier cabin that offers more shoulder, elbow, and headroom, easier access to the rear, and a bigger luggage compartment of 370 liters (up 29 liters). Furthermore, thanks to the two-section rear lights, the boot's loading aperture is now 200-mm wider than before, and the floor gains 115 mm in length.

Besides the clear practicality gains, the design changes are also said to improve visibility: the automaker claims the area obscured by the pillars has been reduced by 10 percent. As for aerodynamics, the A-Class continues to be a reference in the segment, with a coefficient of drag as low as 0.25. It even offers an optional two-section Airpanel grille shutter system.

As you may have noticed by now, the interior is not just more spacious, but completely redesigned as well. The dashboard draws inspiration from larger models such as the E-Class and S-Class, offering a free-standing Widescreen display, air vents in a sporty turbine-look, 64-color ambient lighting, as well as improved materials and new color combinations.

There are three versions for the digital screens: two 7-inch displays, on 7- and one 10.25-inch displays, and two 10.25-inch displays. They are operated by the all-new multimedia system MBUX (Mercedes-Benz User Experience), which adds touchscreen functionality for the main display. If you don't want to leave your fingerprints on the screen, though, the touchpad on the center console and touch control buttons in the steering wheel represent the alternatives.

Endowed with artificial intelligence, MBUX is able to learn, thus creating " an emotional connection between the vehicle, driver, and passengers." Other new developments include a head-up display, augmented reality technology for the navigation display, and intelligent voice control with natural speech recognition, activated with the code phrase "Hey Mercedes."

Adding to the more upscale ambiance are new features such as heated and ventilated seats, a Multicontour Seat package with massage function, as well as an array of available driving assistance systems. Those include semi-autonomous driving tech such as Active Distance Assist DISTRONIC, Active Emergency Stop Assist, Active Lane Change Assist, and Active Brake Assist.

Mercedes-Benz claims efforts have been made to make the cabin quieter than before, with additional insulation of the suspension from the vehicle body, aeroacoustic measures, and increased structural rigidity leading to a significant reduction in interior noise levels. And so we get to the engine lineup, which will include three all-new powertrains at launch.

The entry-level A 200 is powered by a 1.4-liter turbocharged four-cylinder gasoline engine (M 282) equipped with cylinder shutoff technology that makes 163 metric horsepower and 250 Nm of torque. It's offered with either a six-speed manual or an equally new seven-speed 7G-DCT dual-clutch automatic transmission.

New engines will arrive later on (including Mercedes-AMG variants), as well as 4Matic models with fully variable torque distribution.

As with the previous A-Class, the new model features a McPherson front suspension, with more powerful versions such as the A 250 and all 4Matic models getting a four-link rear suspension — as opposed to the entry-level models' torsion beam rear suspension. Adaptive dampers are optional. Mercedes-Benz will start taking orders for the A-Class in March, with the market launch to follow soon after that.

If you don't like the hatchback body style, you should know the all-new A-Class will also be available as a sedan.