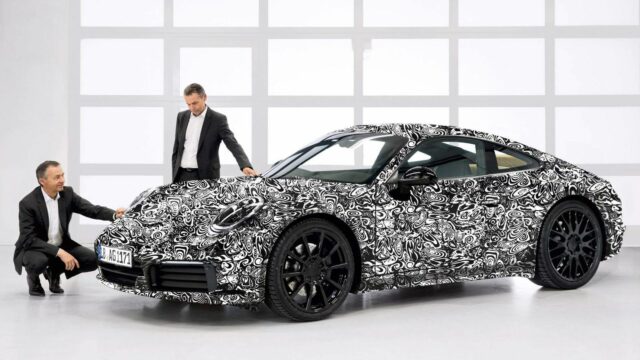 Including what it will look like without the camouflage

For more than five decades, the Porsche 911 has retained its legendary shape, a fact that led to many jokes about the company’s design department. Despite that (or maybe thanks to it), the 911 remains the world’s sports car of choice and Porsche’s flagship model.

Naturally, bringing an all-new 911 to market is no easy feat — except for designers, of course. Joking aside, Porsche has succeeded to constantly improve the 911 over the years and that must continue with the all-new 992 generation scheduled to debut before the end of this year.

As you can see in these official photos, the 992 will continue on the same evolutionary path styling-wise. The camouflage foil may be effective in obscuring the details, but the unmistakable silhouette and round headlights remain.

But what will the brand new 911 look like without the camo? Well, no need to close your eyes trying to picture it because our artist Christian Schulte has already rendered the 992. It looks every bit as you would expect it to, but there are two details that set it apart from the current model: the headlights with their Matrix LED clusters, and the full-width, flatter taillights with OLED indicators.

What matters more, however, is what will the 911 bring new to the table in terms of powertrains and technology. Entry-level models are expected to get a 30-hp boost from their EA9A2 family of turbocharged flat-six engines (offered with rear-wheel drive and all-wheel drive), which means the base 911 Carrera will boast around 400 hp.

The big news is the PDK transmission will evolve from a seven-speed unit to an eight-speed configuration. The extra cog will obviously help lower fuel consumption and emissions, but don’t worry: the 911 will continue to offer a manual transmission for the purists. Porsche cannot ignore the advancements in hybrid powertrains, so the 992 may become the first 911 ever to feature some sort of electric drive.

“Two years ago I’d have said no way. Today I wouldn’t categorically rule it out.”

While the 992 won’t be an electric sports car, Achleitner concedes electric drive could be an option somewhere down the line. Having driven the Porsche Mission E all-electric prototype and witnessed the performance of the Porsche LMP race cars with hybrid drive systems, Achleitner says he can imagine an electric motor in the 911. But that will only happen if it fits the specific character of the 911.

The Neun-Elfer won’t be immune to other technological advancements either, such as digitalization and connectivity. The spy shots from Automedia reveal a cockpit with digital gauges surrounding the huge analog tachometer, as well as a large digital screen atop the center console.

As for assistance systems, Achleitner says they have to fit with the 911. Adaptive cruise control or lane-keeping assist may be convenient, but no one buys a sports car because of them. Porsche’s philosophy is to allow the customer to make the choice to use them and switch them off when they’re not desired.

And rest assured, the 911 will always have a steering wheel, Achleitner says, adding that Porsche’s core model will be one of the last cars to drive autonomously.