When Hyundai showed the FCEV pre-production concept in summer 2017, we knew the final version would look very similar. We just didn't expect it to be identical — even the Range Rover Velar-style retractable door handles have carried out to the production model. Hyundai now has a name as well for its new fuel cell EV: it's called the Nexo, and it has debuted at the CES 2018 in Las Vegas. It will replace the Tucson Fuel Cell (a.k.a. ix35 Fuel Cell in some markets) in Hyundai's lineup, and it comes with plenty of visible and invisible improvements. While the design is modern and inspired by Hyundai's latest products such as the Kona (especially the bug-eyed face), it's the improved fuel cell powertrain that steals the show. The Nexo has an estimated driving range of 370 miles (595 km), 105 miles (169 km) more than its predecessor. Furthermore, power and torque have increased to benefit overall performance. The electric motor delivers 120-kW (161-bhp) and 291 lb-ft (394 Nm) of torque, accounting for an increase of 20 kW and 70 lb-ft over the Tucson Fuel Cell. The system also includes a 95-kW fuel cell stack that turns liquid hydrogen into electricity, supplying a 40-kWh battery which in turns powers the electric motor.

Thanks to the upgraded powertrain, the Hyundai Nexo covers the 0-60 mph (0-96 km/h) sprint in 9.5 seconds, making it 3 seconds quicker than the Tucson Fuel Cell. Assuming there's a hydrogen station around, refueling the tank takes up to five minutes, giving the Nexo a clear advantage over purely-electric competitors. Besides the new fuel cell electric powertrain, the Nexo debuts new technologies (hence the CES 2018 reveal), including a new Blind-spot View Monitor (BVM) system that uses cameras to show the rear and side views of the car on the center screen while changing lanes. Thanks to wide-angle surround view monitors (SVM) on each side of the vehicle, the system monitors areas that cannot be covered by a traditional rearview mirror. Other new technologies debuting in the Nexo are Lane Following Assist (LFA), Highway Driving Assist (HDA), and Remote Smart Parking Assist (RSPA). The Nexo will be available in select markets around the world starting in early 2018. The new fuel-cell EV is part of Hyundai Motor Group's target to introduce 18 eco-friendly models to global markets by 2025. 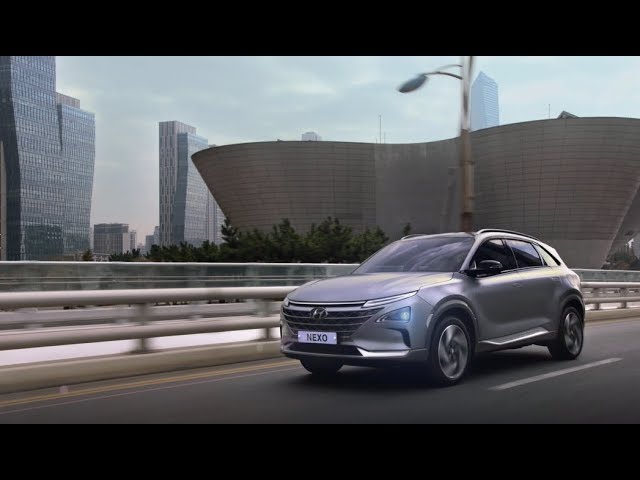 The Korean conglomerate is not putting all its eggs in one basket, though. Besides developing hydrogen fuel cell cars, the company is also investing in purely-electric vehicles as the Kia Niro EV Concept proves.