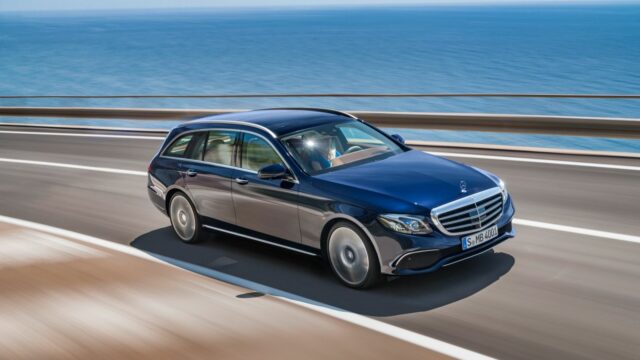 Mercedes-Benz has released the second body style of the all-new E-Class, the practical and versatile Estate

As always, the automaker's largest wagon boasts a huge cargo volume as well as best-in-class headroom and elbowroom at the rear. The boot can swallow 670 liters with all seats in place, but cargo volume increases to 1,820 liters when the rear seats are folded down. As a result, the E-Class remains the roomiest model in the premium segment and one of the few car models that can accommodate a Europallet. From late 2016, the Estate will again be available with a third, folding bench seat for children.

As standard, the backrest of the second-row bench seat can be positioned at an approximately 10 degree steeper angle, creating an additional 30 liters of cargo volume. The E-Class Estate offers plenty of potential configurations between transport capacity and seats thanks the 40:20:40-split folding rear seat backrest.

The new E-Class Estate shares the platform, engines, and technologies with the fifth-generation E-Class sedan. At launch, the engine lineup will include four gasoline units and three diesel units. The entry-level gasoline model is the E 200 powered by an 184 PS (181 hp) 2.0-liter turbocharged four-cylinder unit, followed by the E 250 with a 211 PS (208 hp) 2.0-liter turbo-four, and the E 400 4Matic powered by a 333 PS (328 hp) 3.5-liter twin-turbocharged V6 engine. For now, the range-topping gasoline model will be the Mercedes-AMG E 43 4Matic, motivated by a 401 PS (395 hp) 3.0-liter twin-turbocharged V6 unit.