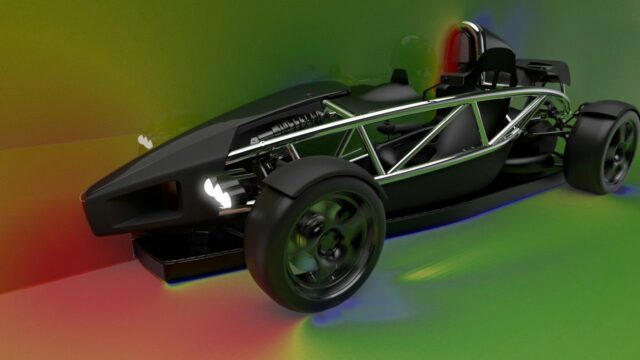 The prototype produces downforce even when stationary

Ariel Motor has released an intriguing prototype of their Atom model called Aero-P.

Using innovative active and passive aerodynamics the test car aims to reduce CO2 emissions while improving vehicle stability and safety by minimizing aerodynamic drag. The most astonishing thing about this test car is that it produces downforce at any speed, including standstill, which is why it's nicknamed "The Vacuum Cleaner." But why on earth would a car need to give downforce when standing still?

In the words of Ariel boss Simon Saunders, "we're moving towards the point where traction and therefore acceleration, particularly from standstill, are limited by mechanical grip so were trying to come up with ways of overcoming this. One of our targets was to minimize or remove the need for aerofoils and have ‘downforce when stationary'".

Saunders says designers took inspiration from banned racing cars of the past such as Jim Hall's 1970 Chaparral 2J Sucker Car and the Gordon Murray Brabham BT46B Fan Car of 1978.

So how does ground effects work on the Atom Aero-P? The car features two small, lightweight, high-speed fans placed under a rubber skirt added to the bottom of the tub. The fans can spin very quickly, creating a vacuum-like effect for increased downforce at low speeds.

Running only when necessary and for brief amounts of time (for example from start, when cornering or under braking), the fans remain in stand-by at cruise and high-speed conditions, improving vehicle range and reducing CO2 emissions.

While conventional wings and aerodynamic devices provide downforce at speed (the higher the speed, the higher the downforce), they also reduce a vehicle's top speed and negatively affect fuel consumption and emissions.

Since the Atom Aero-P has no wings drag is not increased, which means the car can go faster more efficiently. According to Ariel Motor, "the downforce generated by the system not only improves cornering ability but also braking for track use and in emergencies, increasing performance while improving stability and safety."

For now much of the project is still in development and remains confidential, but the technology clearly has the potential to change the auto industry. The UK-based company says the solutions adopted by the Aero-P demonstrate what can be achieved in terms of cooling and airflow management requirements on electric and hybrid vehicles, as well as conventional cars, with the aim of reducing fuel consumption and boost performance.