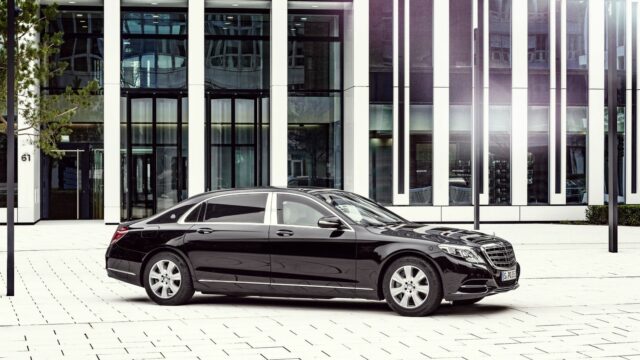 Called the Mercedes-Maybach S600 Guard, the new version of the flagship sedan is the first vehicle to be certified with the highest ballistic protection level VR10 for civilian vehicles. The bodywork and windows can withstand hardened steel core bullets fired from an assault rifle. The vehicle has an ERV 2010 rating (Explosive Resistant Vehicles). According to the automaker, the S600 Guard delivers "the highest levels of ballistic and blast protection available for non-military vehicles."

Priced at €470,000 plus VAT in Germany, the S600 Guard is based on the Mercedes-Maybach S600, which means it's 5,453 mm long and has a wheelbase of 3,365 mm. That makes it 20 mm longer than the S-Class Saloon with long wheelbase, which translates into increased space for rear passengers. Furthermore, the S600 Guard's rear executive seats have been repositioned further back, with other exclusive details including the voice amplification system.

The occupants are protected from bullets and explosive devices, with the car featuring armoring that entirely covers the underbody under the occupant compartment, something Mercedes-Benz says is a unique feature in the civilian special-protection segment.

It takes a very keen eye to distinguish the S600 Guard from regular Mercedes-Maybach S600 models, as the armored car looks virtually identical to its series-produced counterpart. What the car can do is more important, as the S600 Guard packs a series of special technical features to ensure it remains mobile during and after an attack, being able to exit the danger zone.