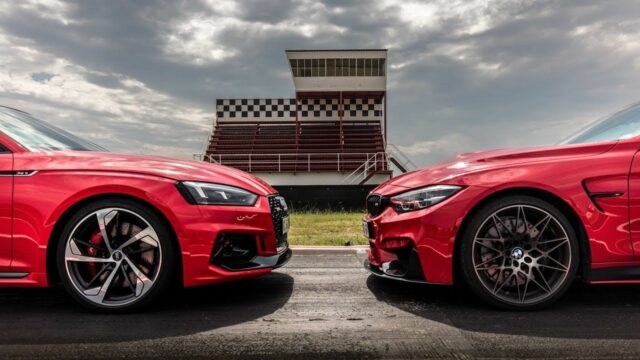 Two brands with very vocal fan bases on the world wide web see two of their top dogs having a stab at each other on the drag strip.

The M4 in the video is a Competition Package model but, and there’s a big but here, the Audi RS5 benefits from the wonders of quattro, so it should be more apt at putting the power down thanks to all-wheel drive.

Their powerplants are different animals as well. The BMW M4 relies on a straight-six engine while the RS5 employs a V6. However, power outputs are very similar at just over 440 hp and so are their acceleration times.

The M4 is said to reach 100 km/h (62 mph) from a standstill in 4 seconds, while the RS5 is just 0.1 seconds quicker in the same speed bracket. The Audi also has the upper hand when it comes to torque (600 Nm over the BMW’s 550 Nm), so the only thing left to do is see which one is better at using the resources it got on the assembly line.

P.S.: A rolling start drag race between the two would have also been interesting, we think. Don’t you?