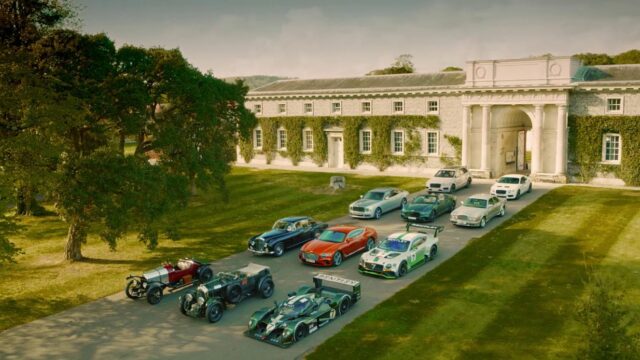 30 iconic Bentleys will be present

Bentley Motors will continue the year-long celebrations of its centenary at this year’s Goodwood Festival of Speed, through a programme of displays and dynamic cars that will bring 100 years of history to life.

The centrepiece of Bentley’s presence will be the Centenary Concours, a 30-strong display of the most iconic models from the marque’s past and present which include one of the rarest and most valuable Bentleys in the world – the 4¼-litre 'Embiricos' Special – alongside Bentley’s recently unveiled and all-new Flying Spur. Other rare highlights include a Gurney Nutting Speed Six, a 1948 Pininfarina Mark VI, a Continental GT Zagato and W.O. Bentley’s own 8-Litre from 1930.

Meanwhile, the Cartier Style et Luxe Lawn will feature at least six R-Type Continentals as the centrepiece of this year’s Concours d'Elegance. Only 208 R-Type Continentals were built, and they now exist as one of the most desirable models from Bentley’s past. The three lines that define the R-Type Continental – the power line, rear haunch and sloping fastback roof – remain the inspiration behind the styling of today’s Continental GT.

The Goodwood Hillclimb will feature more Bentleys than ever before. Four cars that define the chapters of Bentley’s motorsport history will underpin the Bentley Racing Class – a selection of cars curated by Goodwood to tell the history of the marque in a dynamic way. Travelling from Crewe will be:

EXP2 – the second experimental prototype built by W.O. Bentley and the oldest surviving Bentley in the world. EXP2 was the first Bentley to go racing, throughout 1921 and 1922, and will make its Goodwood dynamic debut this year.

The 1929 Birkin Blower, one of four Team race cars built for Tim Birkin’s racing career and raced at Le Mans in 1930. “No.2” is one of the most campaigned and valuable Bentleys in the world, now insured for £25m. It will be driven up the Hillclimb by Katarina Kyvalova, the founder of the Bentley Belles – a group of talented female drivers that race historic Bentleys around the world.

2003 Speed 8 #7 – the very car that won the 24 Hours of Le Mans in 2003. The culmination of a three-year campaign, the Speed 8 scored an historic 1-2 finish to claim Bentley’s sixth Le Mans title and it’s first since 1930. Returning for driving duty will be Bentley Boy Guy Smith, who took the chequered flag.

The 2018 Continental GT3 – the second generation of GT3 racer, now built from the current Continental GT road car. Racing around the world, the Continental GT3 visits the Festival fresh from winning the 1000km Blancpain GT Series Endurance Cup Race at Paul Ricard in the hands of Steven Kane, who will also take the wheel at Goodwood.

The racing Bentleys will be joined on the Hillclimb by four powerful Grand Tourers from the current model range. The Continental GT and new Continental GT Convertible will appear in the Supercar class, with the latter being piloted by rising British female racing driver Abbie Eaton. The very latest additions to Bentley’s range – the Bentayga Speed and all-new Flying Spur – will make their UK dynamic debuts as part of the First Glance class.

Ahead of this year’s Festival, and to highlight Bentley’s long-standing partnership with the event, Goodwood and Bentley have produced a joint film featuring some of Bentley’s most important cars from the last century being used across the Goodwood Estate. With a cameo from His Grace The Duke of Richmond and starring his personal butler, Monty, the film is a celebration of the first 100 extraordinary years of Bentley.