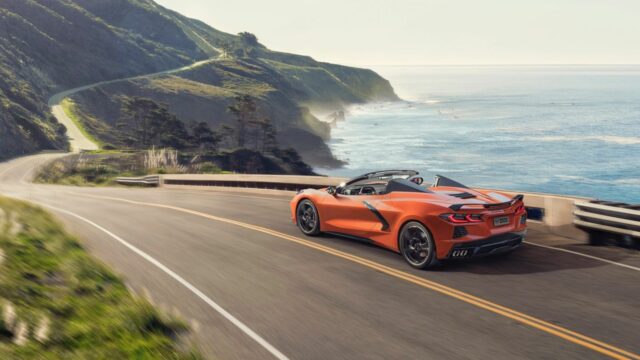 Drive under the open sky

Open-air driving has always been a part of the Chevrolet Corvette’s heritage. In fact, when the Corvette debuted in 1953, it was available only as a convertible.

The 2020 Chevrolet Corvette Stingray convertible builds off that heritage as the first hardtop and mid-engine convertible in Corvette history.

The convertible will be priced only $7,500 more than entry 1LT Stingray coupe.

The mid-engine 2020 Corvette Stingray was engineered first and foremost as a convertible. The convertible maintains the tunnel-dominant structure and use of high-integrity die-cast parts found in the Stingray coupe.

The team engineered the hardtop to stow seamlessly into the body, maintaining the Stingray’s ability to store two sets of golf clubs in the trunk even with the top down. The convertible also keeps the coupe’s front storage compartment, which can fit an airline-spec carry-on and a laptop bag.

The hardtop provides a quieter cabin, increased security and a cleaner look compared to the previous softtop designs.

Like the coupe, the Stingray convertible’s design was inspired by fighter jets. The tonneau cover features aerodynamically shaped nacelles influenced by the housing used for jet engines. The nacelles help reduce air recirculation into the cabin and provide an exotic profile with the top up or down. The tonneau also offers a rear power-adjustable window and a vent for mid-engine cooling.

The two-piece top can be activated at speeds up to 30 mph and retract in as few as 16 seconds. It is powered by six electric motors — a Corvette first — and uses encoders for precise control. Switching to electric motors from hydraulic systems helps increase reliability. A body-colored roof is standard, while Carbon Flash metallic-painted nacelles and roof are optional.

A divider glass window in the middle of the vehicle can be power adjusted with the top up or down. The glass has been optimized to reduce air recirculation and wind noise in the cabin for improved quietness.

Engineers tweaked the chassis for the convertible, with springs and dampers tuned specifically to provide nearly the same performance as the coupe.

Like the Stingray coupe, the convertible is powered by the next-generation 6.2L Small Block V-8 LT2 engine. It will produce 495 horsepower (369 kW) and 470 lb-ft (637 Nm) of torque when equipped with performance exhaust.

The LT2 is paired with Chevrolet’s first eight-speed dual-clutch transmission.