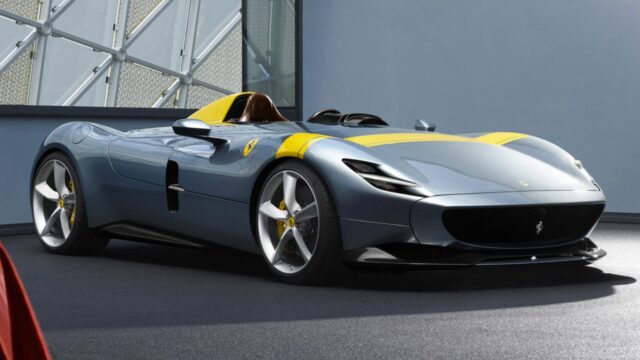 They’re the forerunners in a new concept called Icona

Ferrari’s presence at the 2018 Paris Motor Show will be remembered in the days to come thanks to the Monza SP1 and Monza SP2 concepts shown in the French capital.

Both concepts are a bow to the exquisite barchettas of the 1950s and the gentlemen racers who drove them in various competitions.

More concretely, the Monza SP1 and SP2 pay homage to the 1948 Ferrari 166 MM, which is the first Maranello model to be referred to as a “barchetta.”

Harnessing all that is a dual-clutch transmission tweaked to offer sportiness and only sportiness.

Extensive use of carbon fiber is also on the menu, with a clear goal, says Ferrari – “to make them light and responsive and to enhance their sporty, aggressive visual appeal.”

As far as design goes, we’ll let Ferrari do the talking when it comes to the exterior:

“The pivotal idea was to break up the volume into two shells: an upper cover and a lower hull. These two elements create a dialogue yet the upper shell seems almost to float, an effect obtained by a an uninterrupted strip inside a groove that circles the cockpit and ends above the tail. This solution creates the impression that the two volumes are separate.

[..] the side lights and brake lights have been redesigned as a single unbroken line of light, seamlessly integrated into the slender gap between the two shells. This turns the tail light assembly into a theoretical line that traverses the wings and circles the bonnet, giving the impression that the upper shell is literally suspended above the rest of the volume.”

And also when it comes to cabin topography:

“Starting with a drop theme in the form of an obvious ring on the tonneau cover, the interior architecture splits into three levels. The first is delineated by the driver’s visual horizon. From that perspective, the line between the car’s interior and exterior is very subtle indeed. The driver’s body is entirely encapsulated by the car apart from their head which juts out over the horizon line, as in racing cars, thus reducing visual distractions of all kinds.

The second level comprises the instrumentation, steering wheel and air vents. Lastly, the spare cockpit embraces, at armrest level, the rest of the commands which are clustered on a single very simple surface completely devoid of any stylistic virtuosity.”

Part of the concepts’ fancy aero work, the so-called Virtual Wind Shield prevents the air flow from hitting the driver’s face despite the lack of a traditional windscreen. Here’s how it works:

“The Virtual Wind Shield is essentially an aerodynamic passage underneath the driver’s side aero screen, where the upper part is shaped as an aerofoil. Part of the air flowing over the bonnet enters the air intake under the aero screen, where it is accelerated and deflected vertically ahead of the instrument panel. It is aided in doing so by the nolder on the aero screen itself which creates strong suction thereby accelerating the air coming out of the duct beneath the wind shield. This generates what is known as a highly energised upwash that deflects the flow over the driver’s head creating a low-speed bubble around the cockpit.”