From mono-radio to gesture control: the evolution of VW Golf's infotainment systems

It's amazing how many things changed throughout seven generations

If you want to see how far cars have gone over the years from a technological point of view, in-car audio systems are accurate indicators.

From mono-radio units to cassette and CD players, not to mention today's connected infotainment systems that offer a wide range of audio sources, the in-car stereo has evolved tremendously.

And what better car to showcase that evolution than Europe's best-selling model, the Volkswagen Golf? After all, few other high-volume models have been offered under the same name for more than 40 years. But while the name has stayed the same, engineers and designers have continually developed the Golf.

A close look at the model's infotainment systems used throughout its seven generations shows how the Golf has kept up with the times. Here we go. When the first-generation VW Golf arrived in 1974, buyers were given the spartan-looking "Braunschweig" radio. It only had one rotary knob on the left for power and volume, one on the right to select the station, and three buttons in between — one for medium wave and two for VHF. That was all. Not long after that, however, the offer got richer as VW introduced the "Ingolstadt Stereo CR" cassette radio system, giving the driver and passengers more control over what came out through the speakers. 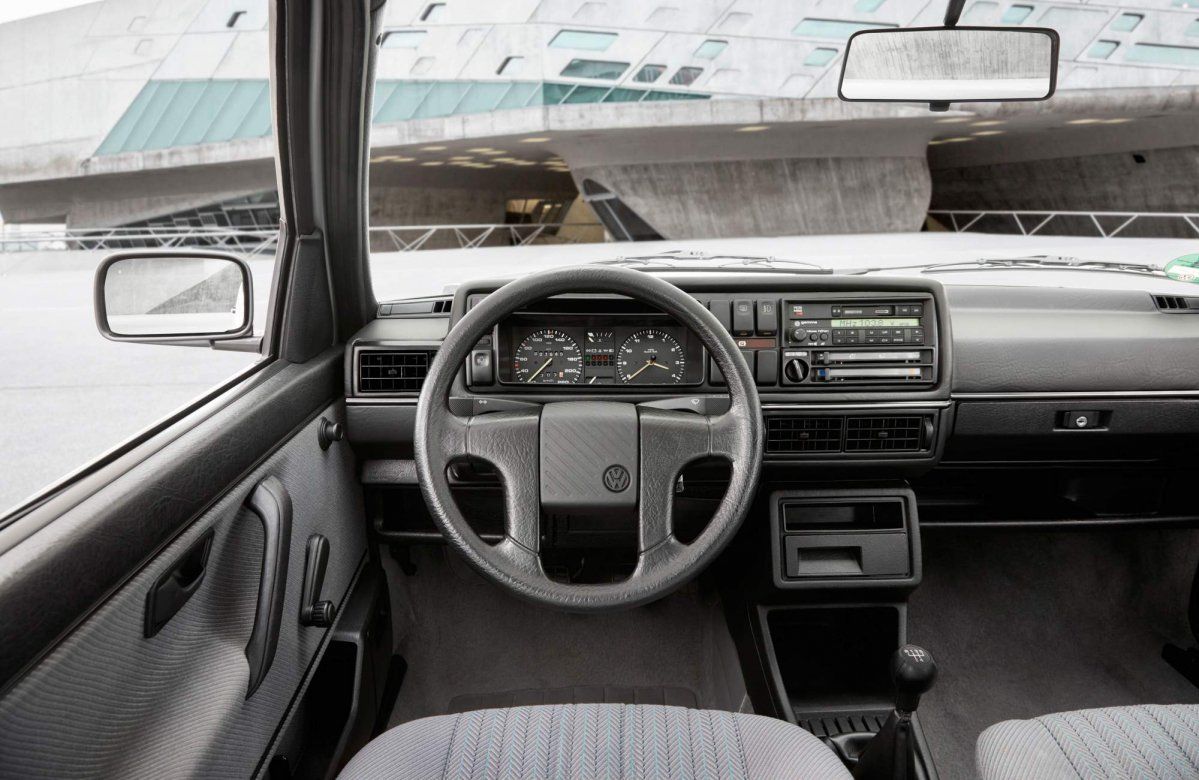 The second-generation Golf, introduced in 1983, reflected the evolution in technology as it came with the "gamma" radio that displayed the radio frequency digitized in an LCD screen. 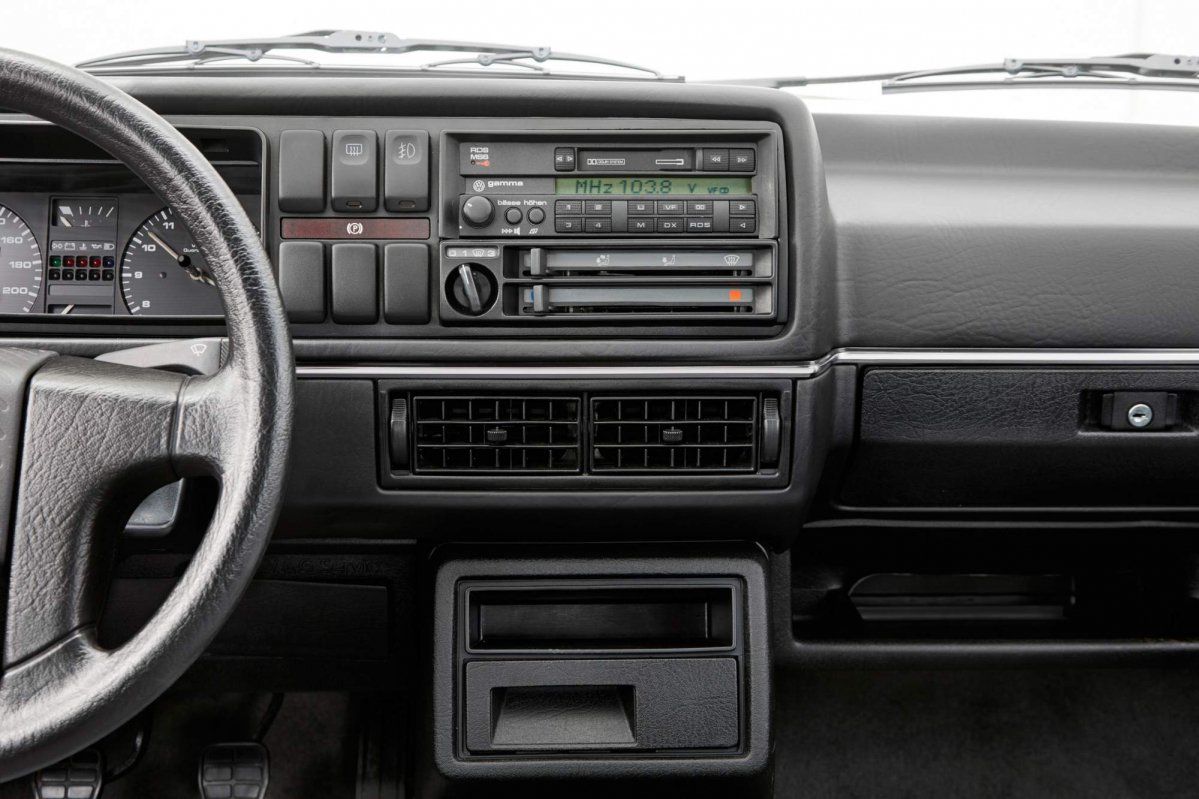 The 4x7-watt stereo system also offered features like the Dolby button for noise reduction in cassettes, as well as code-protected radio. By 1991, when the third-generation Golf debuted, the cassette was still very popular, so it became standard. As for the radio, new features like automatic station search and traffic announcements were introduced on the "alpha" radio cassette player. In 1997, the cassette started to be challenged by the compact disc in the Golf Mk4. While it still took cassettes, the "gamma" radio featured a CD-changer connection for the first time. However, the CD-changer was in the boot, so it was better to have it fully loaded before a long drive. At the same time, the introduction of double DIN devices began with the Multi-Functional-Display (MFD), allowing for a bigger display and colored navigation maps. 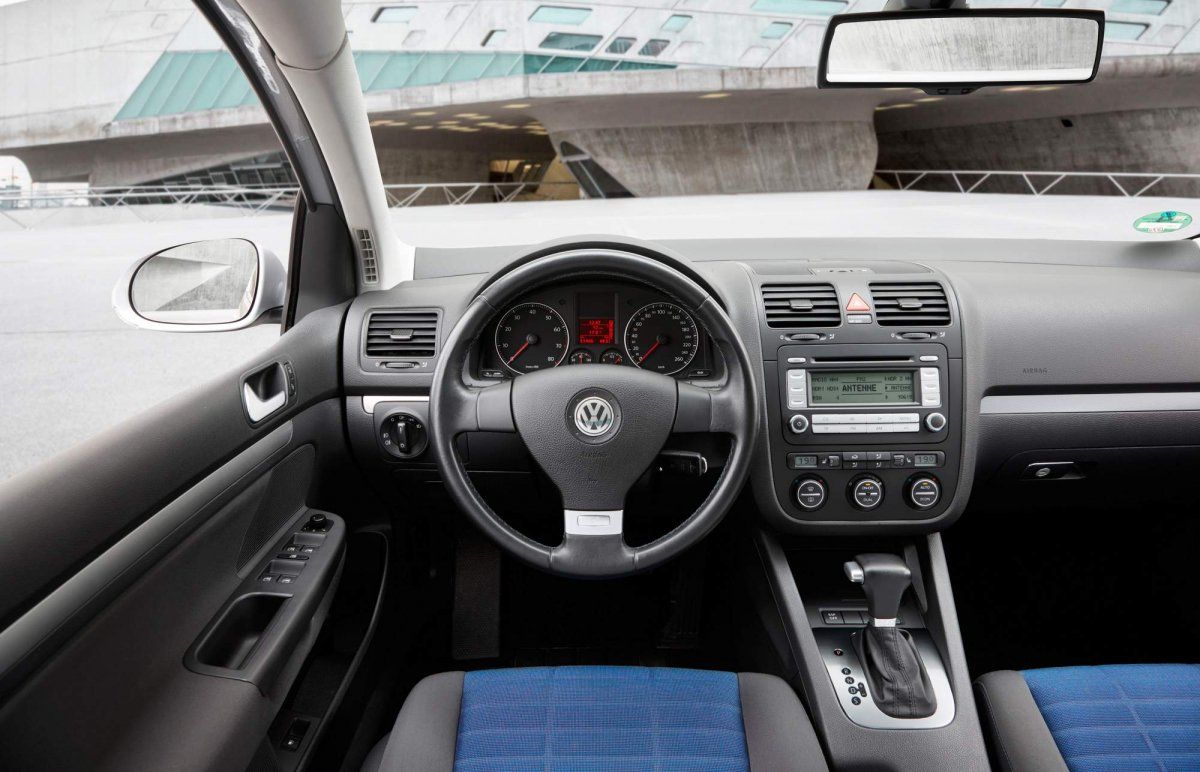 By 2003, the fifth-generation Golf only came with double DIN devices — the "RCD 300" with CD drive is a good example. Cassettes became a thing of the past, as CDs got more popular than ever. 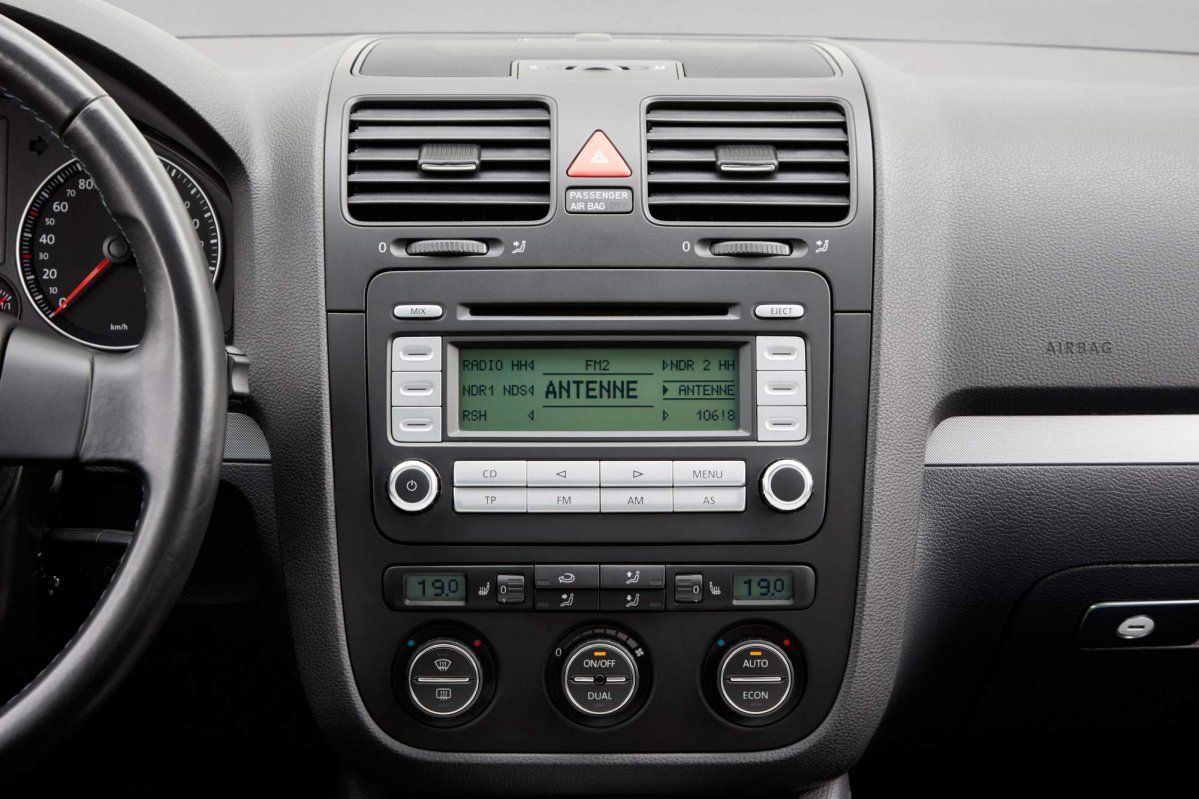 However, the Golf Mk5 didn't remain indifferent to the mobile phone's growing dominance. The design and technology of the "MFD2" radio navigation system looked to the future, offering the option to connect a digital MP3 player. 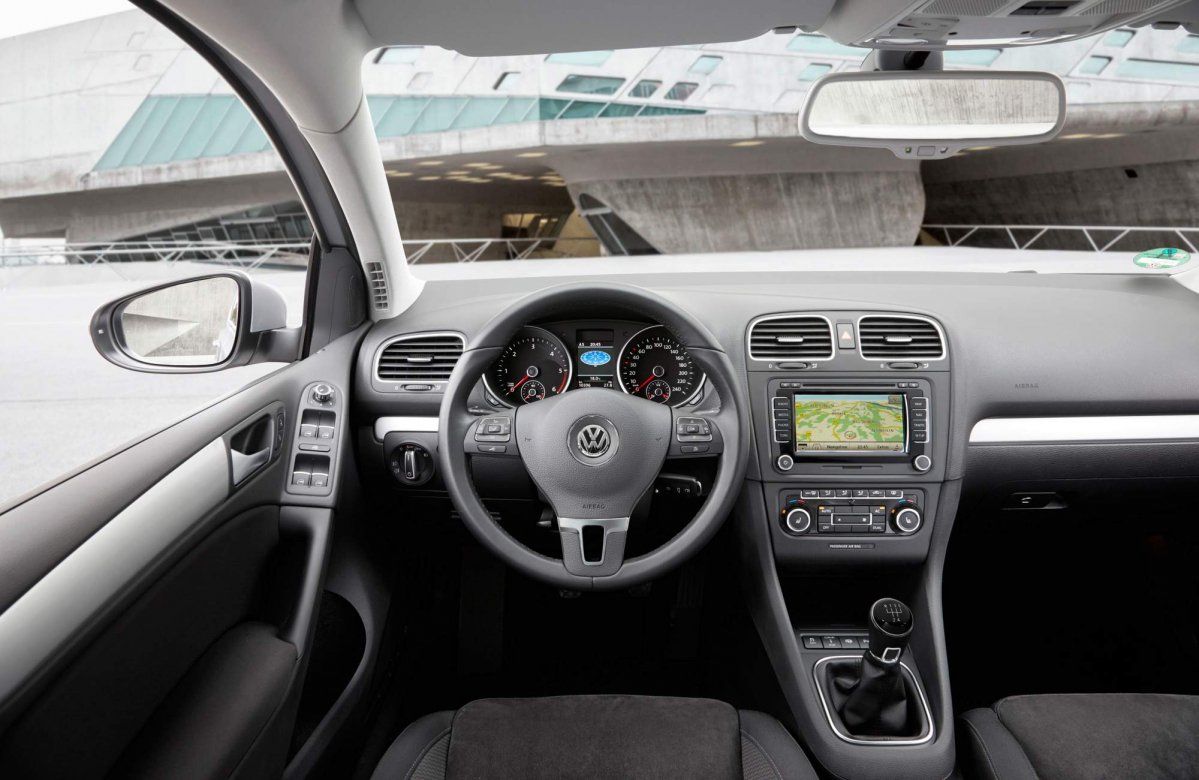 By 2008, the new "RNS 510" in the Golf Mk6 came with a touch screen and DVD drive for the navigation system — and not only that. It was a proper multimedia system, offering a USB port, digital audio reception (DAB), dynamic navigation and 30 GB hard disk. While it's true that most of these features were also offered in the Mk5 towards the end of its life cycle as part of the optional RNS 500 system, it's in the Mk6 that they became mainstream. With the launch of the seventh-generation Golf in 2012, Volkswagen took a major leap forward as far as infotainment systems were concerned. The Discover Media System came with 3D map display, Bluetooth, and a WLAN hotspot, among other features. 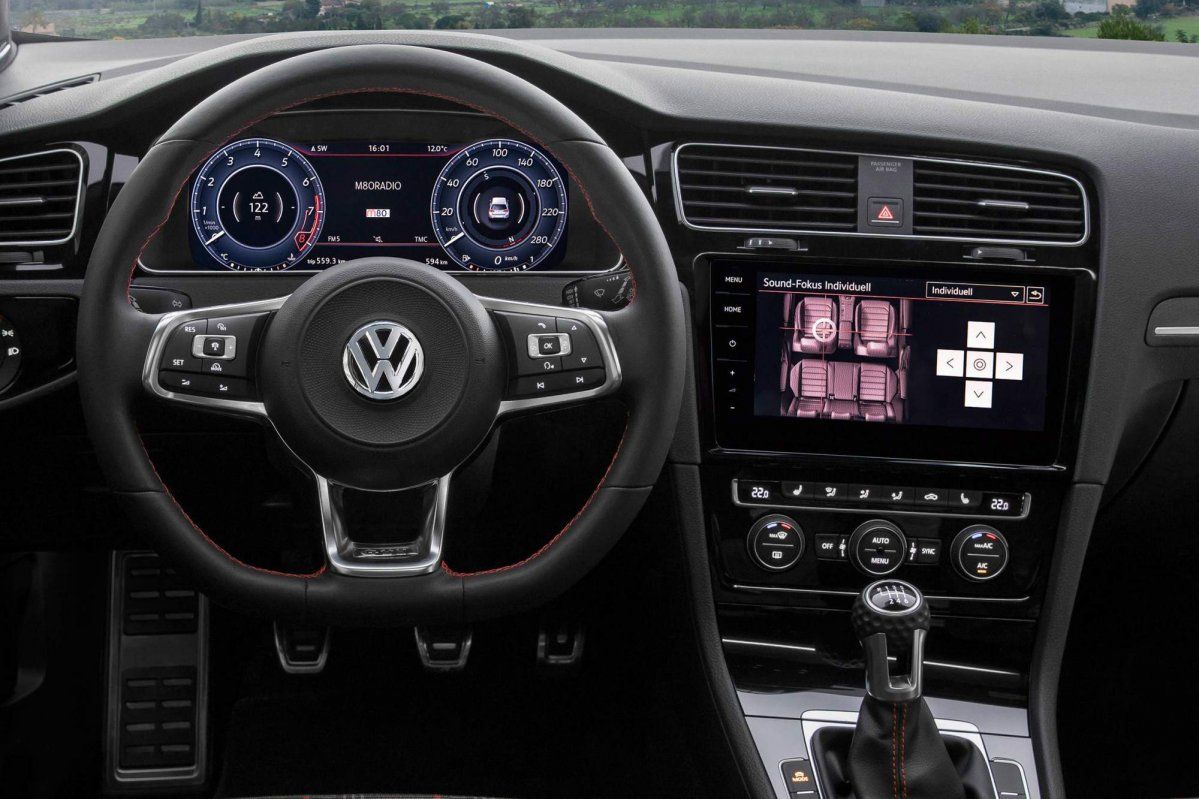 The system also features voice control and proximity sensors, for a better interaction between man and machine. The 2016 facelift took things further with the introduction of the latest generation of modular infotainment systems. For example, the glass-covered Discover Pro comes with gesture control (a first in the compact class) and ditches analog buttons. In addition, the optional "Active Info Display" digital instrument panel is a sign of further things to come.

While you're here, check out our review of the facelifted seventh-generation VW Golf.