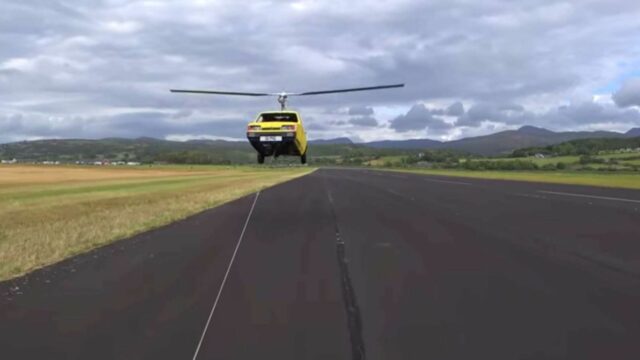 We already knew it has some problems walking

We don’t know what exactly pissed off Jeremy Clarkson about the Reliant Robin, but he repeatedly made this little car famous for all the wrong reasons.

The most famous lesson we learned from the Clarkson-Robin interaction is that the Robin will stumble in its sole front wheel during hard cornering, turning upside down. It wasn’t so reliant after all, and, as the bottom video shows, it’s not as good as a robin (bird) either. But now, a Robin Reliant history lesson from Jeremy Clarkson.

We still have some questions (that will probably remain unanswered) regarding the experiment shown below: does the car uses its own engine (although mounted differently, as the front end seems empty) to power the rotor? Actually, this might be our only curiosity.

We’d ask ‘why, though?’ but we already have an answer in the description: “Attempting to make a Reliant Robin 3 wheeler fly. As they were always unstable on the road.”

It looks like they’re not stable in the air either, although that autogyro looks like it can get some improvements. A lot, maybe. Nevertheless, we have learned another important lesson: don’t try to fly a Reliant Robin, nor drive it fast on public streets.