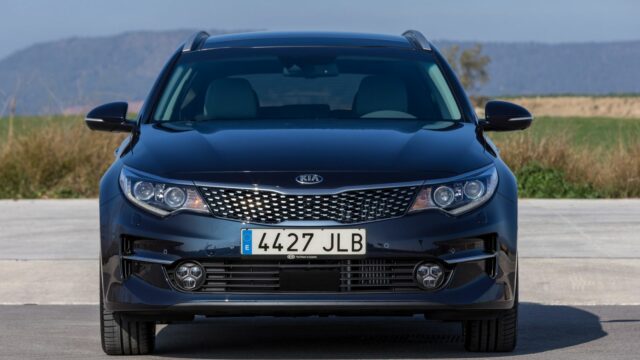 Well, sort of, as the production car looks less dramatic than the study for practical reasons. Called the Optima Sportswagon, the new D-segment estate debuts at the 2016 Geneva Motor Show with a 553-liter cargo capacity and 40:20:40 split-fold rear seats. It won't be available in North America, though.

Kia's first D-segment wagon takes inspiration from the 2015 Sportspace concept vehicle, but it looks less dynamic than the study because the automaker had to make it more practical. On the production model, the windshield is more upright, and the glasshouse is taller. Still, it's a fine-looking estate car, at least in our book.

Based on the 2016 Optima sedan, the Sportswagon features the same interior design, minus the boot area which is significantly roomier due to the estate body style. Kia designed the Optima Sportwagon specifically for Europe, as wagons make up two-thirds of all D-segment sales in the region. The automaker says the new model "will play a critical role in attracting new private and corporate buyers to the brand," and describes it as "important conquest product."

The Optima Sportswagon will be available with the same gasoline and diesel powertrains that are offered on the Optima sedan, including a high-performance GT model. Customers will be able to choose between two gasoline engines and a diesel unit. The base gas engine is a 2.0-liter SVVL unit with 163 PS while GT versions get a 2.0-liter T-GDI turbo powerplant rated at 245 PS. Diesel adepts only have one option – a 1.7-liter CRDI engine rated at 141 PS, which can be mated to an optional seven-speed double-clutch gearbox.

The Kia Optima Sportswagon will go on sale across Europe in the fourth quarter 2016.