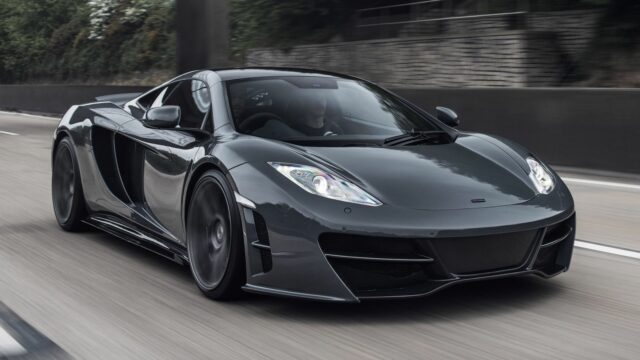 It also gains 40 hp over the stock version

With McLaren Automotive's rapid development in recent years, it's easy to forget that the company's first production car in the post-F1 era was the MP4-12C — later known simply as the 12C.

Built from 2011 to 2014 it was quickly replaced by the 650S, much to the displeasure of customers who had already bought the 12C.

Fortunately for them, some tuners are still offering styling and performance kits for the 12C — UK-based Mulgari Automotive is one of them. The company has a new bespoke vehicle ownership program, Signature Vehicles, which offers new cars tailored and built to the customer's desired specification — like the MINI Cooper S we've featured recently.

The showcase car for the Signature Vehicles program is a unique McLaren MP4-12C known as "Project Twelve." Based on a 2012 MP4-12C, the build took eight months to complete, with Mulgari upgrading both the style and performance of the McLaren.

Visually, Project Twelve stands out thanks to a series of aggressive-looking carbon fiber parts including the front bumper, side skirts, rear bumper, and diffuser. The car rides on new magnesium-alloy wheels, custom designed by Vossen in the United States. Finally, the paint was changed from the production car's Volcano Orange to a dark gray hue.

Mulgari also made changes to the interior, adding lightweight carbon-fiber seats with a bespoke stitch design.

Performance-wise, a new exhaust system was developed with Fabspeed USA, resulting in the addition of quad exhaust tips that remind of the iconic McLaren F1. Add to that the new performance intakes and a recalibrated ECU and you get a maximum output of 640 hp — 40 hp more than the standard 12C.