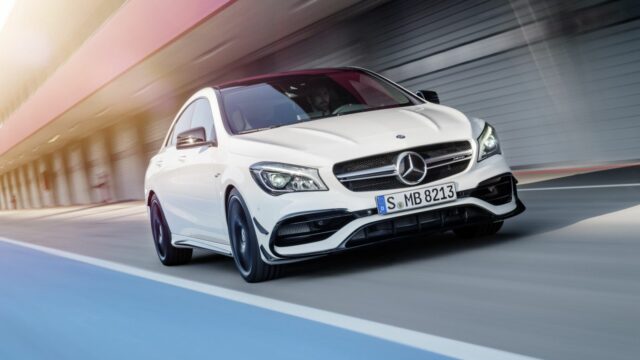 Three years after the launch of the CLA four-door coupé, the compact model family gets its first refresh

Mercedes-Benz has made some subtle changes to the CLA range that will only be noticed by people with a keen eye for detail.

The minor facelift applies both to the CLA and the CLA Shooting Brake and will debut at the 2016 New York Auto Show in late March (the four-door coupé) and at the Laureus World Sports Awards in Berlin on April 17-18 (the wagon). From a styling point of view, the 2017 Mercedes-Benz CLA features new bumpers with silver, black or chrome trim strip, a standard diamond radiator grille in black, and new light-alloy wheels.

Inside, the CLA family also gets enhancements such as new seat covers and trim parts, chrome-plated controls, as well as a new, slimmer 8-inch touchscreen display available as an option. Other optional extras include LED High Performance headlamps, Hands-Free Access and more possibilities to integrate smartphones.

Sadly, the CLA Shooting Brake will continue to be off-limits for U.S. customers, but Mercedes-AMG's version of the four-door coupé will get a power upgrade, following in the footsteps of its European counterpart. The 2.0-liter turbocharged four-cylinder engine in the 2017 Mercedes-AMG CLA 45 now delivers 375 hp, which translates into a 0-60 mph sprint of 4.1 seconds and a limited top speed of 155 mph.

The 2017 A 45 is available with a front mechanical limited-slip differential in combination with the Dynamic Plus package. The only other powertrain offered in the United States is the 208 hp 2.0-liter turbo in the CLA 250, which carries over unchanged to the 2017 model year.

In Europe, the CLA family gets a new all-wheel drive version, the CLA 220 4Matic, powered by an 184 PS (181 hp) 2.0-liter turbocharged four-cylinder gasoline engine mated as standard with the 7G-Tronic 7-speed automatic transmission.

The CLA Shooting Brake has received a new engine variant that was previously offered only on the Coupé – the CLA 180 BlueEfficiency Edition powered by a 122 PS (120 hp) 1.6-liter gasoline engine. The model has an average fuel consumption of 5.5 l/100 km (42.7 mpg U.S.) according to the NEDC cycle.

The 2017 CLA is expected in U.S. showrooms in the third quarter of 2016 while in Europe both the CLA and the CLA Shooting Brake will be available to order from April and will hit dealerships in July 2016.