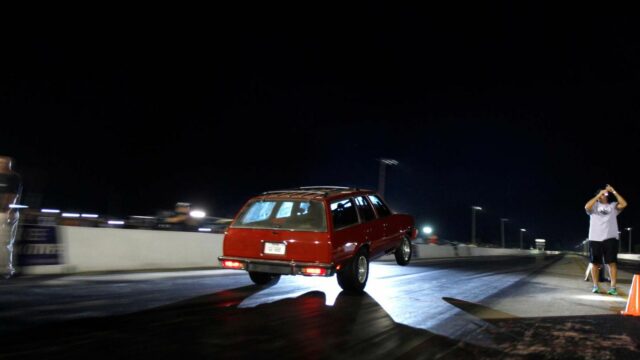 It’s like drag racing, minus one essential detail: grip

Almost seven decades since its official debut, drag racing gathered a lot of popularity and got very, very fast. So it’s time for a step back; one that’s as unsafe as it is spectacular.

With the cars packing more and more horsepower, and the rubber compound — despite its technological progress — having its limits, the drag strips are coated with an adhesive substance to ensure maximum grip under heavy, constant acceleration. This procedure takes place the day of (and during the) competition, to keep the track sticky for the full-throttle runs.

And then there’s a no-prep race, where the competitors are trying to put all that power down without the help of Pimp Juice — one of the names of the adherent compounds. If you’re wondering whether that’s safe, well, it isn’t. But it’s somehow a return to the early days of drag races that unfolded on city streets, not on specially prepped surfaces.

Basically, they’re simulated street races, with cheering crowds allowed in the vicinity of the cars, but safe enough not to be wiped by an out of control car.

And that — an out of control car — is a common sight when you combine high-powered four wheelers and low-grip surfaces. As you can see in the two videos below.