Opel had a very sensual design lately; not anymore, as PSA changes course towards the electric era

German, approachable, exciting - these are the three attributes PSA wants to put forward when rethinking the German brand it got from GM

In a concept car that looks like something from Battlestar Galactica, Opel unveiled what it believes will be the main design characteristics of its upcoming models under the Peugeot-Citroen patronage: Teutonic lines, approachable technology, and exciting features. Built around the Opel Vizor, the front strikes as a very futuristic and geometrical design paradigm - one usually found in concepts from the '90s, not in the silky shape-shifting concepts of the late 2010s. Gone are the sensual and fluid lines of the current generation of cars (much beloved by Opel fans), here comes the angular-shaped car prepared for the electric revolution. Speaking of EVs, Opel wants to completely electrify its range by 2024 - this doesn't mean it will be a 100% electric brand, but that it will offer at least a hybrid version for each of its models.

In the crossover era, of course the concept that will stand as a fundamental milestone for Opel's future design is a crossover - 4,063 millimeters long, five doors and all-electric. And Opel's officials seem so very pleased with it. “With our PACE! plan, we have a very clear vision of how we want to create a successful future for Opel. Focus on a strong brand identity defined by our values – German, approachable, exciting – plays an integral role in our return to sustainable success. Our Brand Concept shows how these values will come to life in our products in the future. Our engineering and design teams have put this into effect brilliantly in the Opel GT X Experimental. It gives a clear idea of how we at Opel see the mobility of the future,” While being compact, the GT X Experimental has a generous wheelbase (2,625 mm) and is wide enough (1,830 mm) for a generous interior, even if it's just 1,528 mm tall. Sitting on 17-inch wheels, the GT X is powered by a 50 kWh next-gen lithium-ion battery that supports inductive charging. It also has Level 3 autonomous driving functions, enabling the car to handle all aspects of driving while the driver might check out his emails but must remain able to respond to a request to intervene. Taking a cue from the Peugeot-Citroen design manual, the Opel Blitz now is oversized and made of LEDs that will shine in a different color to communicate different vehicle modes, being the focal point of the frontal part. The Blitz is surrounded by a single module that frames the brand elements and includes the LED matrix headlights, the wing-shaped daytime running lights (preserved from the current design language), as well as the cameras and sensors for the driving assist functions. This is called the Opel Vizor and will feature on all new Opel models from 2020 on. Visual detox for the interior

While the exterior lines will figure in the upcoming production models, the interior is quite concept-ish, and not much will be kept on a normal car. However, the `visual detox` philosophy used at the exterior is also applied here. Mimicking the Opel Visor, there's only one wide, single screen that welcomes drivers and shows that the multitude of screens, buttons, and controls often seen in current-day production vehicles could become obsolete. Of course, as drivers of Peugeot and Tesla cars already know, this isn't a very good idea and we hope Opel will keep physical buttons for the main functions of the car. 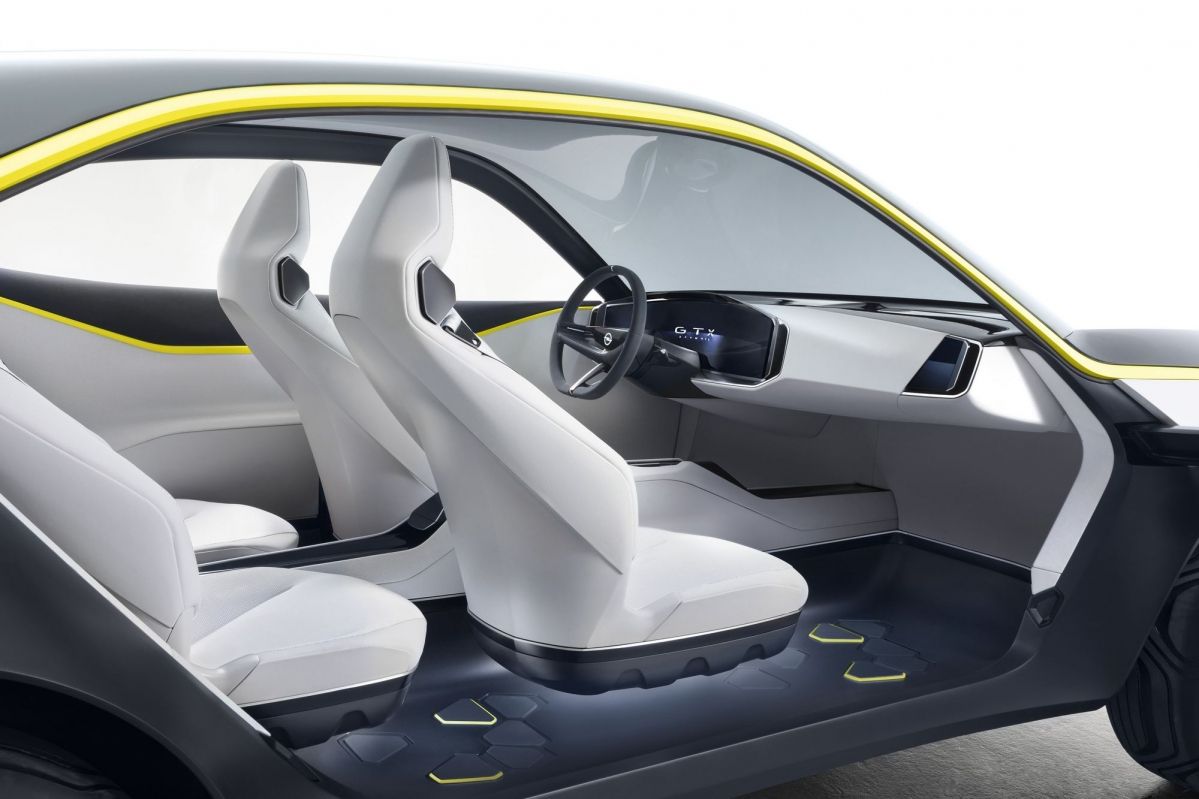 Called `the Pure Panel`, this screen enables drivers to have access to the latest technology and get the information they need while eliminating all visually distracting elements. Two screens on the far left and right of the front panel display the side views captured by the small pop-out cameras. Elsewhere, the design of the steering wheel has been simplified while its center module repeats the shape of the Opel Vizor. And, like its counterparts on the wheels, the LED Opel Blitz on its center remains upright whatever the steering position. Overall, Opel GT X Experimental should be just the first of a series of concepts that will refine Opel's vision of its future cars' design. While having to admit that the current sensual (and gorgeous) design philosophy is already a thing of the past, we would still like Opel's designers to keep the brand's design a little bit in line with the families that buy their cars. But, who knows, perhaps this abrupt change is for the best?

Tell us what you think in the comments below, we'd like to hear especially from Opel's fans!