Russian MacGyvers build a Transformer out of a Lada

It can even fire weapons!

Inspired by the Transformers series, a father-and-son team created a fully functional robot car, being showcased during a stunt show in Oryol recently. Although the inspiration clearly came from Optimus Prime and its alike friends and foes, the idea (and the mechanical guideline) arose after a vacation in Singapore.

“This year, I was in Singapore and I visited a Chinese market, where I saw a toy car driving around. And it was rising up and coming down [as a Transformer], so I bought it. Then I came home and before New Year's Eve, we began to work on it and wrap it up. We tested it and remastered it a few times because a toy is a toy. But [we took] the general concept and the idea and that is the result. It looks like a world-class car, it can drive and shoot, it performs the same tricks as seen in the film, in the cartoons. The next year, we plan to build another two cars, based on the same concept. We already have a lot of unusual ideas,” explains Gennadi Kocherga in this video.

Unlike this Turkish BMW Transformer, this Bumbleblyat (as one YouTube commenter named this) can even carry one passenger and — given a Lada's bargain price — it's easier to build. As for the plan to build another two transformers, we can only say we hope someday there'll be enough life-size Transformers to have events dedicated to them exclusively. 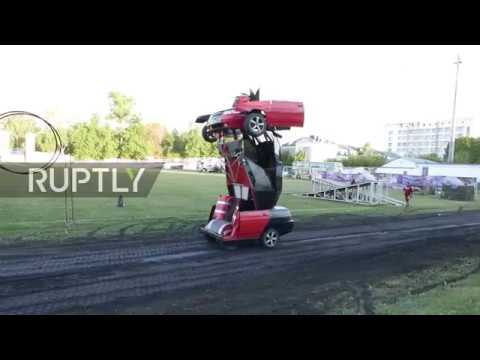