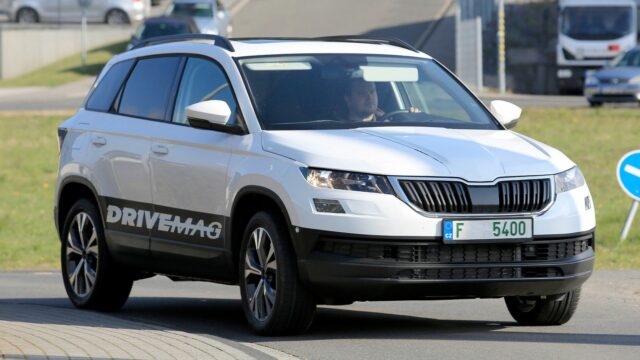 The Skoda Yeti compact SUV is eight years old, and the automaker is putting the final touches on the next-generation model.

We're using "successor" for lack of a better word, but the follow-up to the Yeti will have very little in common with the funky Yeti. Even the name may be changed, with some media outlets such as Autocar reporting that Skoda's new compact SUV will adopt the Karoq nameplate. That hasn't been confirmed by the Czech carmaker, however.

Skoda may be playing a little with us, as the prototype caught by our spy photographers testing on public roads features some makeshift add-on layers on both the front and rear ends. Still, those can't hide the fact that the SUV looks very much like a slightly shorter Kodiaq. Think of it as a VW Tiguan/SEAT Ateca with Skoda design cues — because that's what it is, actually.

Speaking of the VW Tiguan, the successor to the Skoda Yeti will use the same MQB platform, which means it will be lighter, better to drive and more efficient than its predecessor. It will also receive VW Group's latest TSI and TDI engines.

Judging from the description of a recent spy video (that you can watch below), the new compact SUV will be unveiled on May 18 in Stockholm. There's nothing official on that, either.