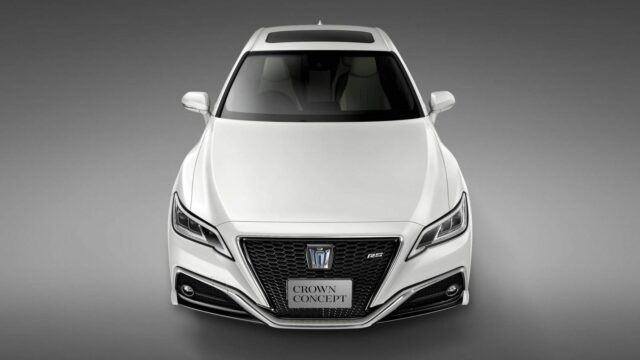 The production version will arrive in summer 2018 in Japan

The Toyota Crown is not only the brand's best-selling luxury sedan in Japan, but also the automaker's longest-running nameplate, being used continuously since 1955 — it even has its own separate logo.

That means the Crown Concept Toyota will unveil at the Tokyo Motor Show (October 25-November 5) is quite significant. It's billed as a design study for now, but it previews the fifteenth-generation Crown which will arrive in Japan in the summer of 2018.

Developed "in pursuit of driving performance and connected technology," the Crown Concept has been redesigned from scratch. Underpinned by Toyota New Global Architecture (TNGA), it's 4,910-mm long, 1,800-mm wide, and 1,455-mm high, with a wheelbase of 2,920 mm.

The automaker has even tested it on the famed Nürburgring Nordschleife circuit — despite the fact that it's a luxury sedan. Toyota talks about "responsive handling performance," as well as driving stability on any roads. No details are available yet about the powertrain.

As for the connected technology it uses, the Crown production car will feature Data Communication Modules that will send data to a mobility service platform, contributing to "solving societal problems."

For example, Toyota says data on traffic congestion will help reduce jams in cities. Furthermore, vehicles will be diagnosed remotely using vehicle data collected from DCMs, allowing for the detection of potential issues and informing drivers when maintenance is needed.

The Crown Concept also features a system called ITS Connect, which is a connected service that shares information on things like traffic signals and other vehicles. We'll learn more details and hopefully see more photos of the Crown study later this month when Toyota officially unveils it at the Tokyo Motor Show.

Interested in Japan-only Toyota models? Something tells us you'll love the Mega Cruiser.