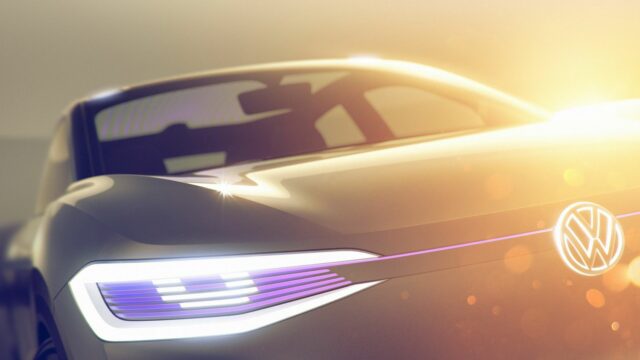 Following the I.D. hatch unveiled at the 2016 Paris Auto Show and the I.D. BUZZ minivan shown in Detroit earlier this year, an I.D. crossover will debut at Auto Shanghai 2017 next week (April 19-29).

We have to admit the first teaser images of the new member of the I.D. family look very promising. Volkswagen describes the study as "a four-door coupé and sport utility vehicle in one," so we could be in for a BMW X6-style design.

The headlights and taillights are united by thin light bars both at the front and at the rear, while the VW badges are illuminated. The teaser photos also allow us to see a sculpted engine hood, as well as the broad rear haunches, the coupé-SUV profile, and the massive panoramic roof.

As with the other two electric concepts, the I.D. crossover is said to offer a long driving range "on the same level of the range of today's petrol powered cars" and fully autonomous driving capabilities.

Going from normal to autonomous mode requires a light push on the VW badge on the steering wheel, which then retracts electrically into the cockpit to form a single unit with the fully digital displays and controls.

The I.D. crossover concept and its siblings show how broad VW's range of electric production models will be by the middle of the next decade. We'll keep you posted as VW releases more information and photos with the new design study.