With the help of an Opel Insignia Sports Tourer

What can you do in Germany during winter as a science geek? Visit some museums, of course! The weather is usually pretty gloomy, with dark clouds, cold rain and even snow. Best to stay indoors and visit some interesting museums. Or drink mulled wine at one of the many Christmas fairs. But that's for later.

OK, how do we do that? First, get on a plane to Frankfurt Airport. Shouldn't be hard, Frankfurt is one the main aviation hubs in Europe, and it's extremely well connected. Second, rent a car. Again, the options are endless, because Germany. We've decided to ask for help to our friends from Opel. The car company has its headquarters in the near town of Russelsheim, only a short ride by S-Bahn from Frankfurt Airport. An hour later, after speaking German with mostly our hands with some Germany-only speaking staff, we prevailed and got the keys of a very new Opel Insignia Sports Tourer 1.6 CDTI. 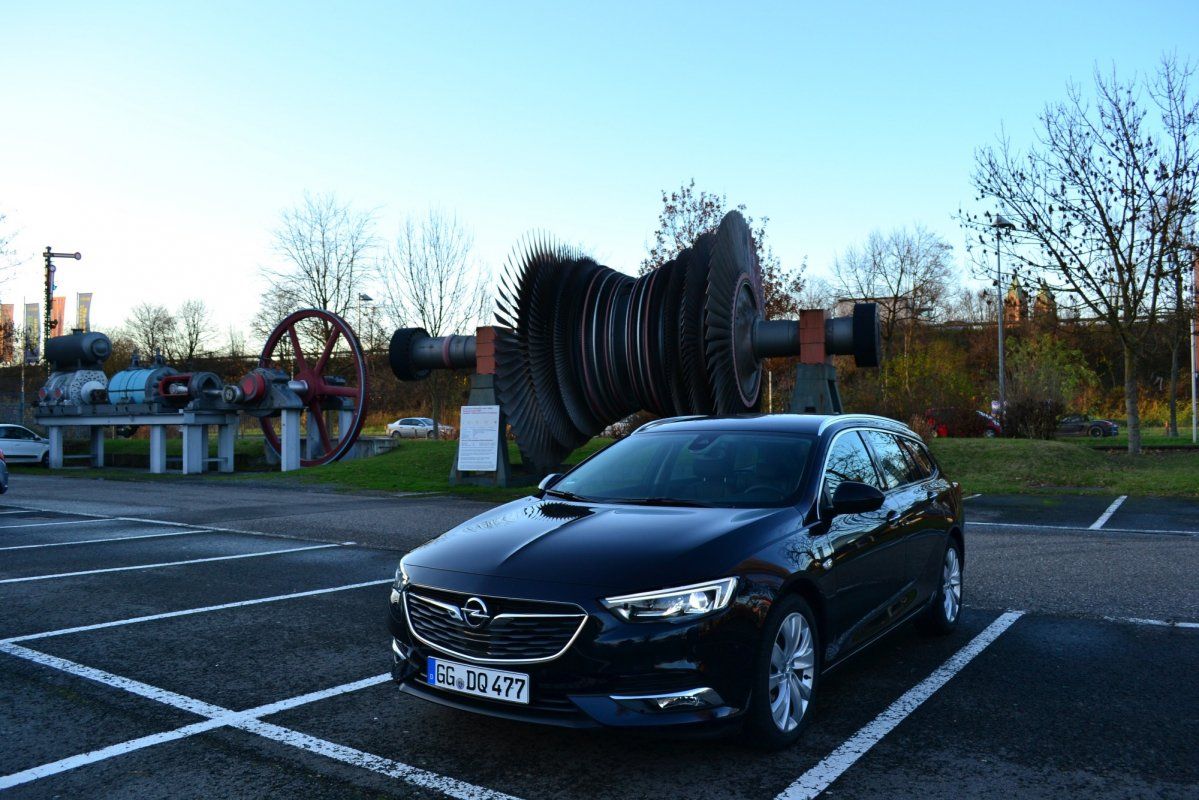 "What a big trunk! And an electric tailgate?" These were our first thoughts while filling the back of the car with luggage pieces.

So, how do you get to the first science museum? Set the navigation system for Speyer Technik Museum, or call the concierge on Opel's OnStar service to do that for you, if you're lazy. Or even simpler, whip out your smartphone and set the Waze app to do the same thing. Pro tip: Waze knows where the speed cameras are. Wink! 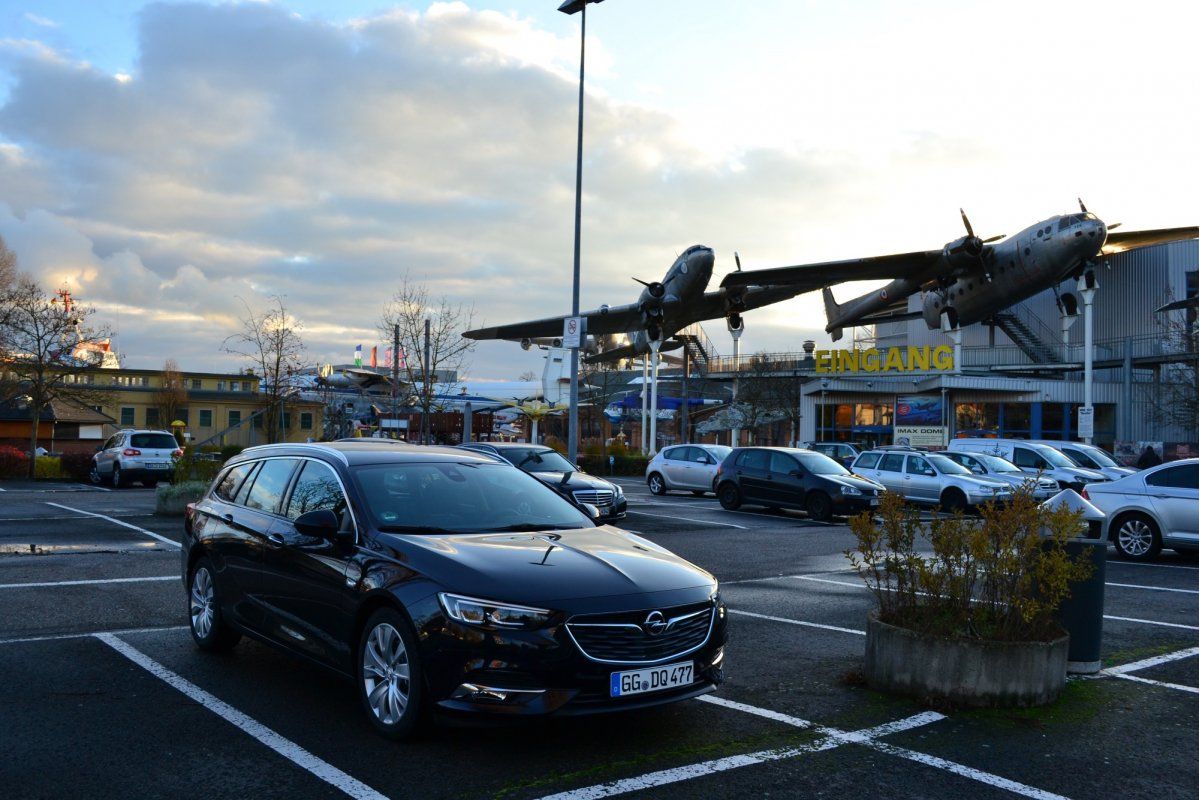 Installed behind the steering wheel, we've started the trip to Speyer Technik Museum, the closest to Frankfurt. Only one hour away, the Speyer Museum is the little brother of Sinsheim Technik Museum, which we will visit later. These two museums are famous in Germany for the science fans.

The Speyer Technik Museum is nested near the small and beautiful town of Speyer. When you leave the A61 autobahn, you cross the river Rhine, and then, on the left side a huge Boeing 747 smiles at you from the top of a building. We're here! 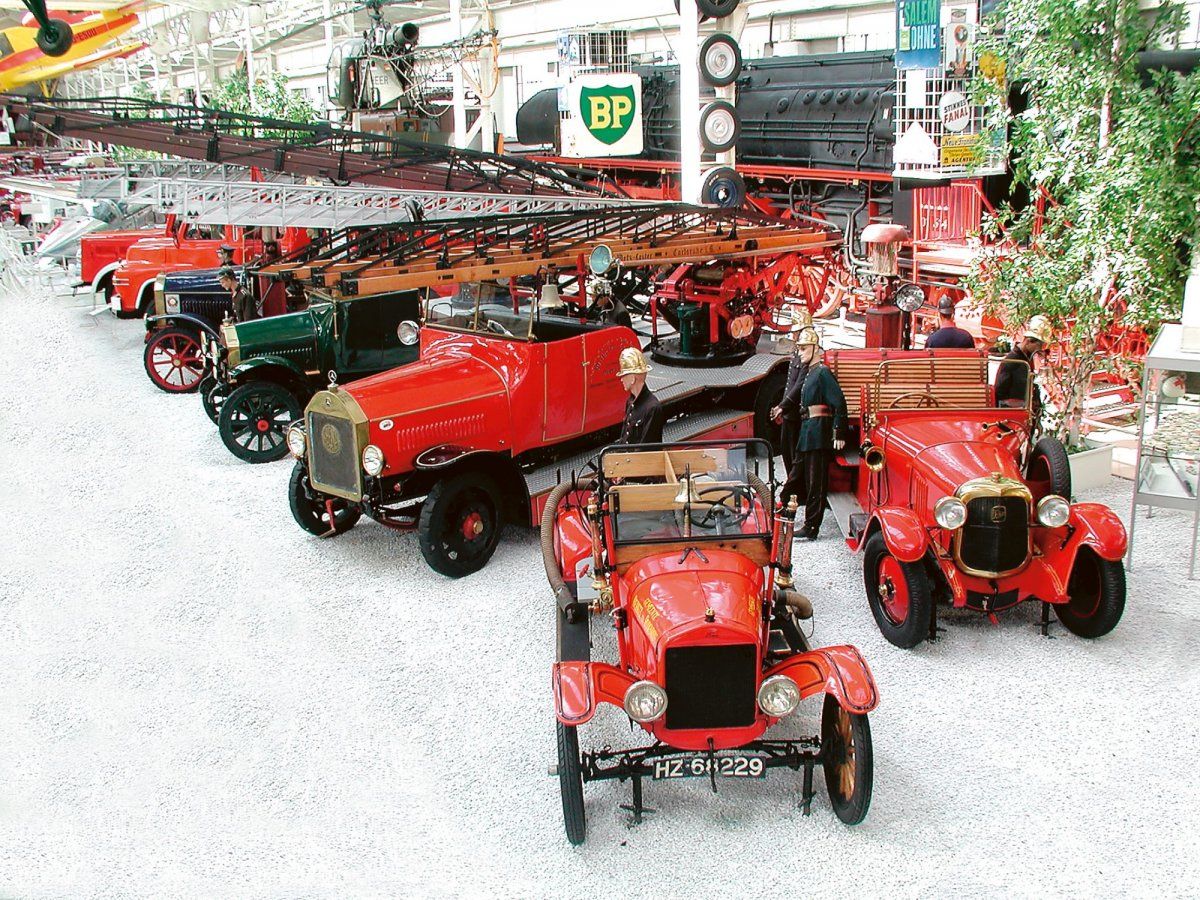 The Technik Museum Speyer has its roots in the Auto & Technik Museum Sinsheim. In the early 1990s, when the possibilities of expansion in Sinsheim were nearly exhausted, the opportunity to build a second Museum in the very center of Speyer on the premises of the former Pfalz Aircraft Company came as a rare and fortunate chance. The first exhibition hall was the so-called “Liller Halle”, a listed factory building from 1913, which today mainly shows vintage cars, motorcycles, aircraft, and fire engines. Today the museum has more than 25,000 square meters worth of indoor space and an outdoor area of over 150,000 square meters. 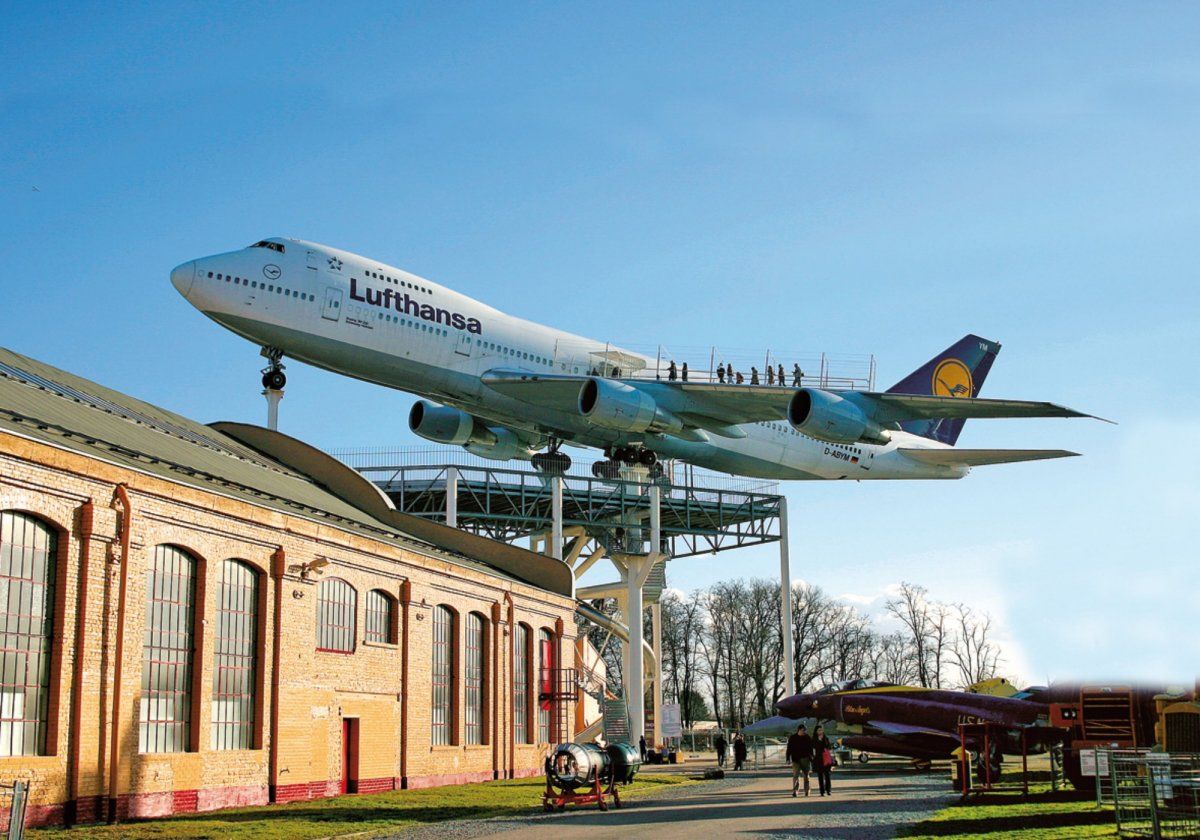 Due to the huge outdoor area the museum made it possible to show very large and unusual exhibit items. The beginning was made in 1993 with the U9, a submarine of the German Navy with a length of 46 meters and a weight of 466 tons. In 1999 it was followed by the Antonov An-22, the largest propeller-driven aircraft to enter series production with a wingspan of 64 meters and a length of 58 meters. In 2003 the museum wrote history when a Boeing 747 “Jumbo Jet” of the Lufthansa was mounted on a gigantic steel scaffold erected on the premises of the museum. To this day, the Jumbo Jet in the Technik Museum Speyer is the only aircraft of this kind which was dismantled, transported to a place outside of an airport and reassembled again. Two other large exhibit items which have complemented the exhibitions in Speyer during the year 2012 are the rescue cruiser John T. Essberger of the German Maritime Search and Rescue Service and a Transall transport aircraft of the German Air Force. 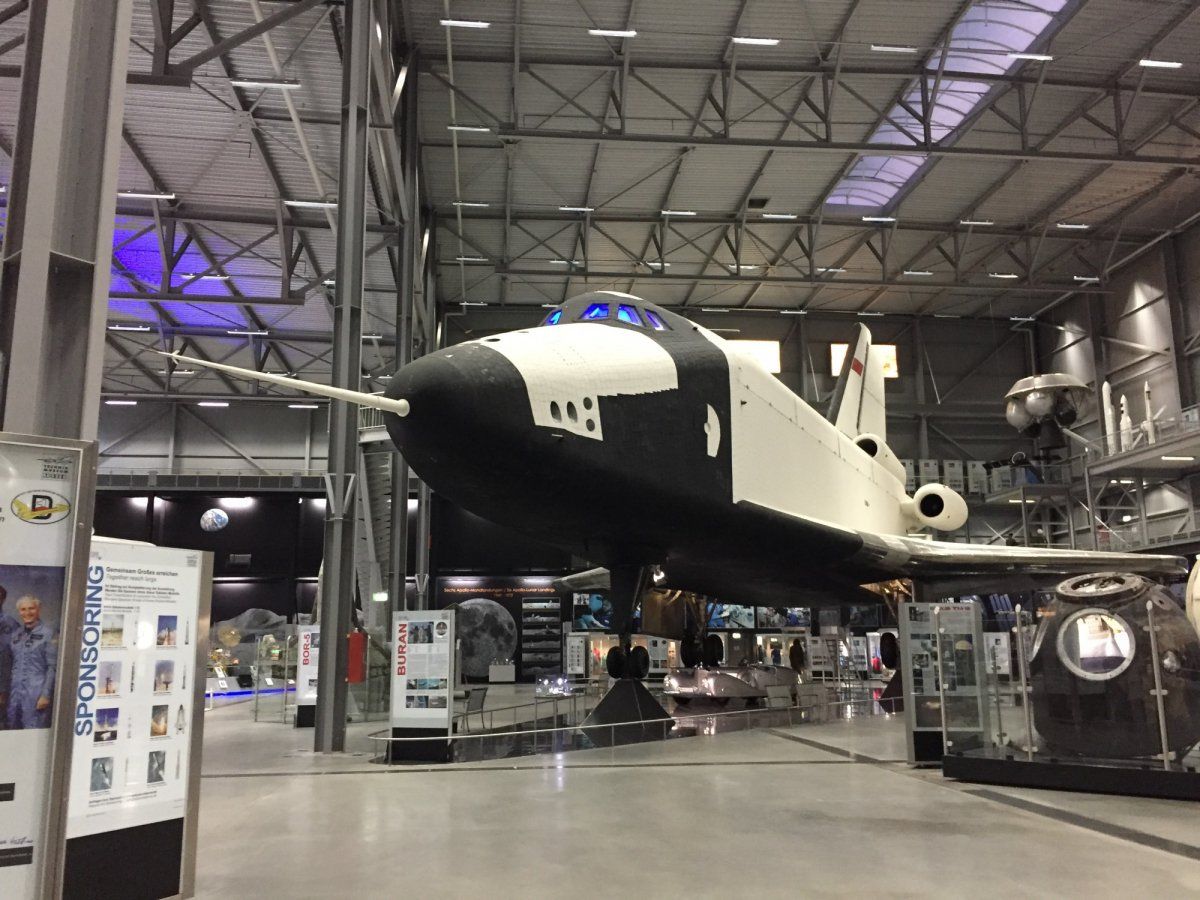 The Speyer Museum also has a large hall dedicated to space travel, and here we can see up close the Russian space shuttle Buran. The transport of the Russian shuttle in early 2008, which led from Bahrain over the open sea to Rotterdam and from there on a pontoon up the Rhine to Speyer, was an outstanding media event. To adequately present the shuttle to the visitors a new hall was built on the premises of the museum in Speyer. 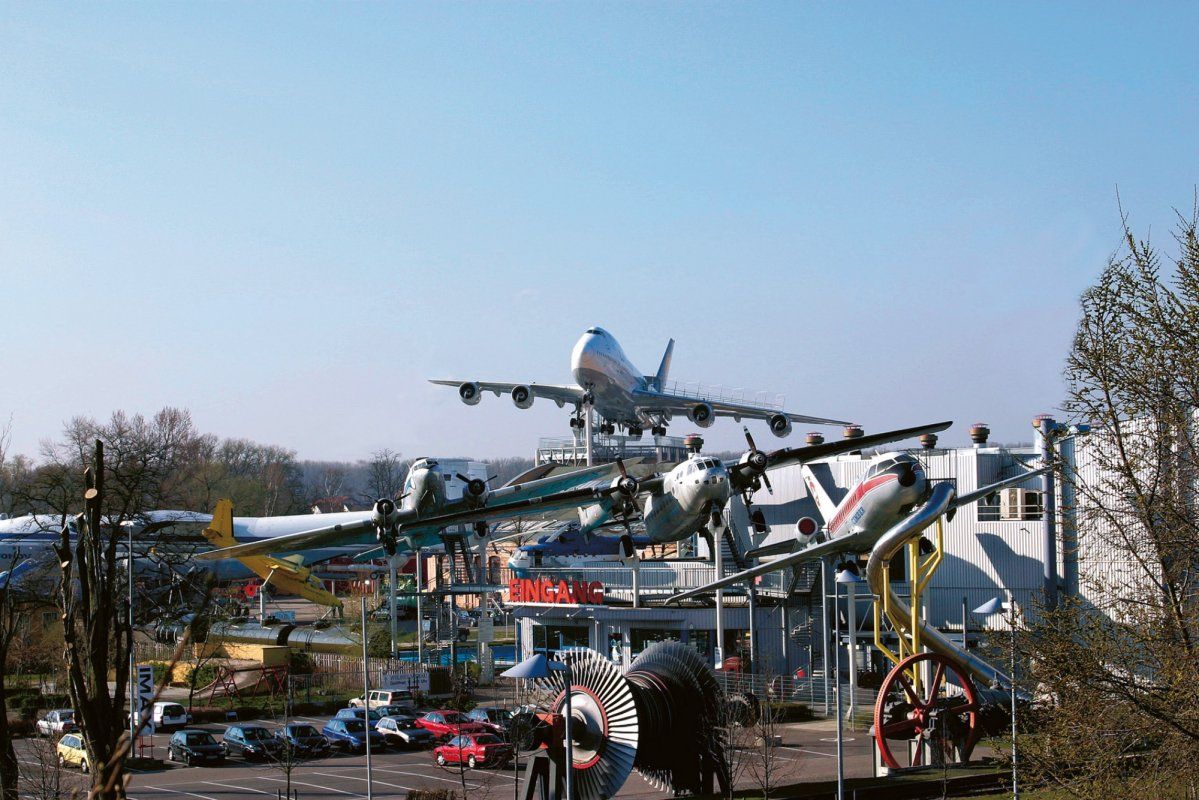 The lunar module and the Soyuz capsule are also here, along with a lot of space suits and even a real lunar rock.

Please note that the museum closes at 18.00, but you can stay at a nearby hotel. Admission fee for the Speyer Technik Museum is €16. You can purchase a combined ticket for both science museum at €21. 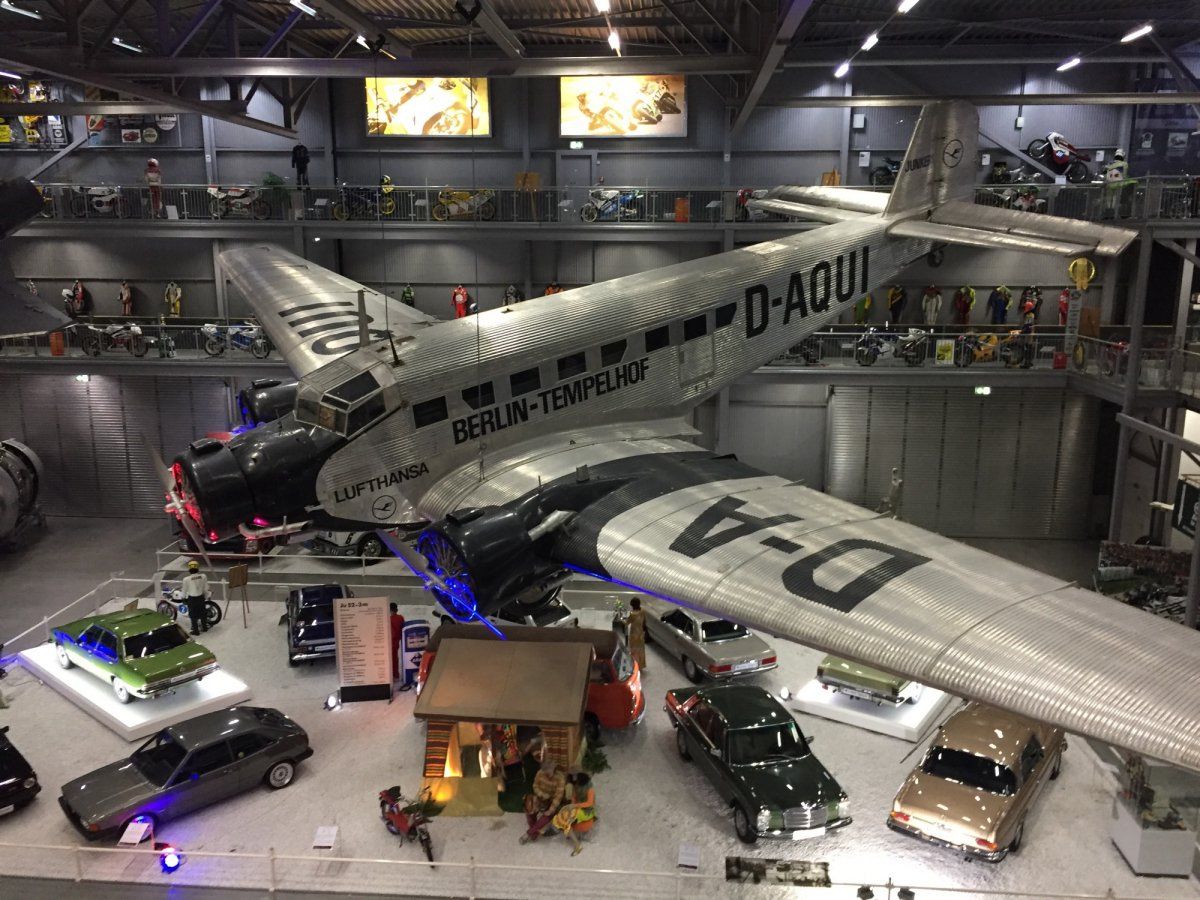 That's exactly what we did, and this gave us the opportunity to visit the Christmas market in the beautiful town of Speyer. Cue the mulled wine drinking.

Next day, a short 30 km hop in the Opel Insignia landed us to Sinsheim Technik Museum. If you have travelled on the A6 autobahn on route to Hockenheim racing circuit, it's impossible to miss the Concorde and the Tu-144 sitting on a building right next to the motorway. 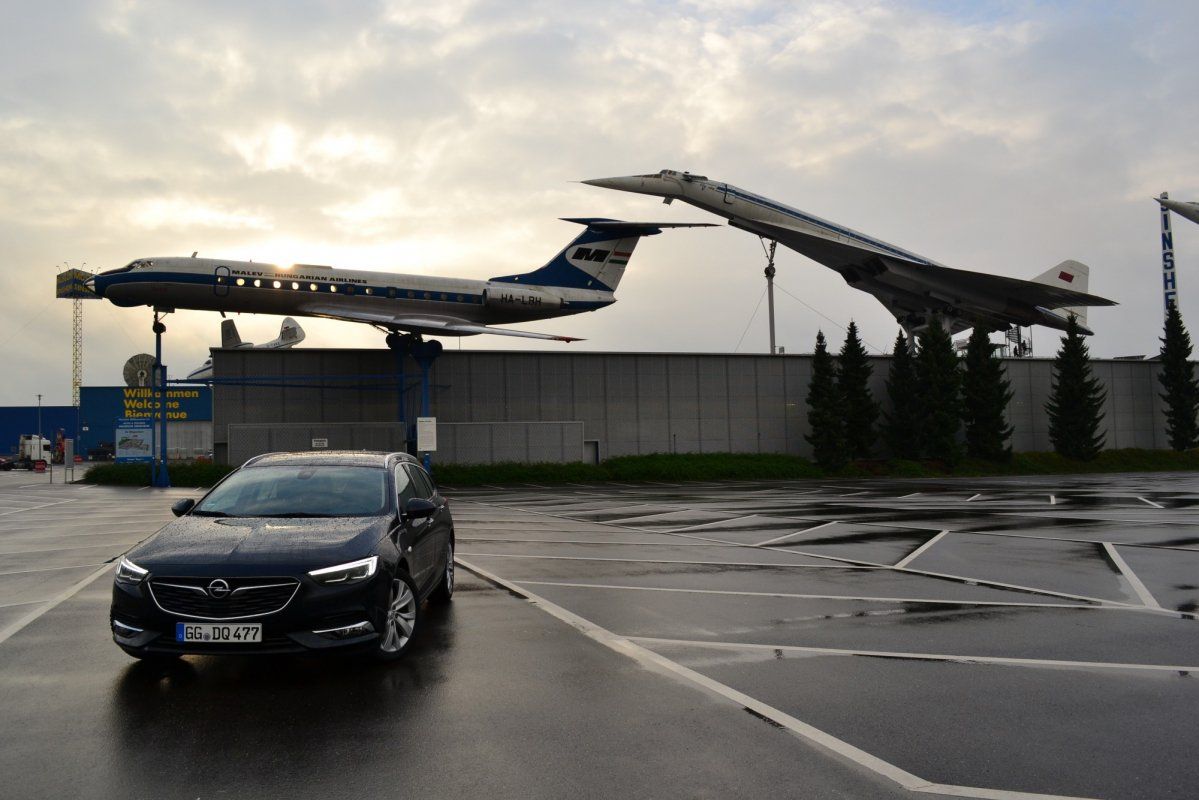 The history of the Auto & Technik Museum Sinsheim began in late 1980. During a meeting held between technology enthusiasts, the idea was born to give the public access to all the gems of technological history that had been restored, often in years of painstaking attention to detail. A museum club was founded and but few months later the Auto & Technik Museum Sinsheim opened its doors for the first time on 6 May 1981. From the beginning, the museum was a great success, and the ever-increasing number of visitors made it possible to quickly extend the exhibition area from the initial 5,000 square meters to more than 30,000 square meters.

Besides many other vintage cars from all eras of automobile history and many other exhibit items the Auto & Technik Museum Sinsheim today presents the largest private collection of vintage Maybachs, supercharged Mercedes models, and Bugatti automobiles in Germany, several hundred motorcycles, aircraft, record vehicles, racing and sportscars, locomotives, military and utility vehicles, engines and much more. 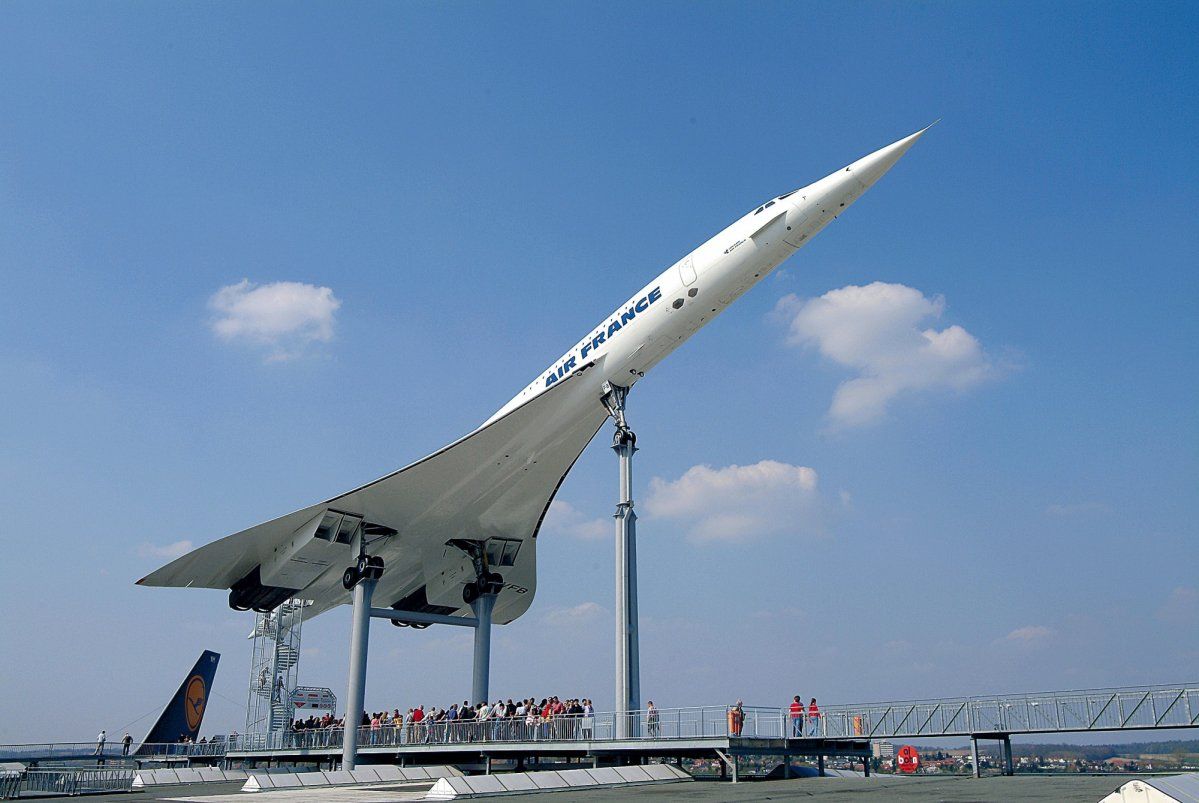 In 1999 the museum club managed to acquire a Russian Tupolev Tu-144 supersonic passenger aircraft. The aircraft was transported from Moscow to Sinsheim over land and sea and mounted in starting position on the roof of one of the museum halls in early 2001. Enough room was left for the only other supersonic passenger aircraft ever built, the French-British Concorde, which at that time was still in service. Only four years later this gap could be filled when a Concorde was donated to the museum by Air France after the retirement of their Concorde fleet. 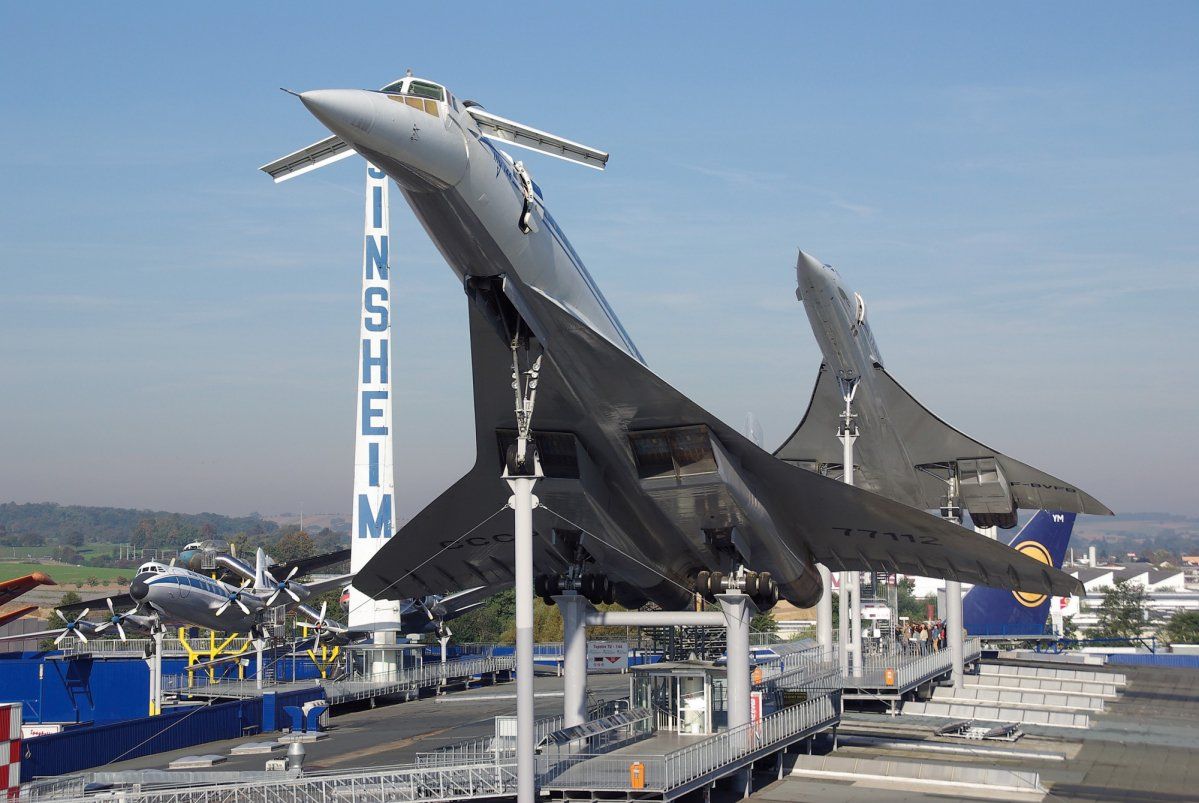 The Auto & Technik Museum Sinsheim is the only museum in the world in which the only two supersonic aircraft ever flying in regular service can be visited side by side. 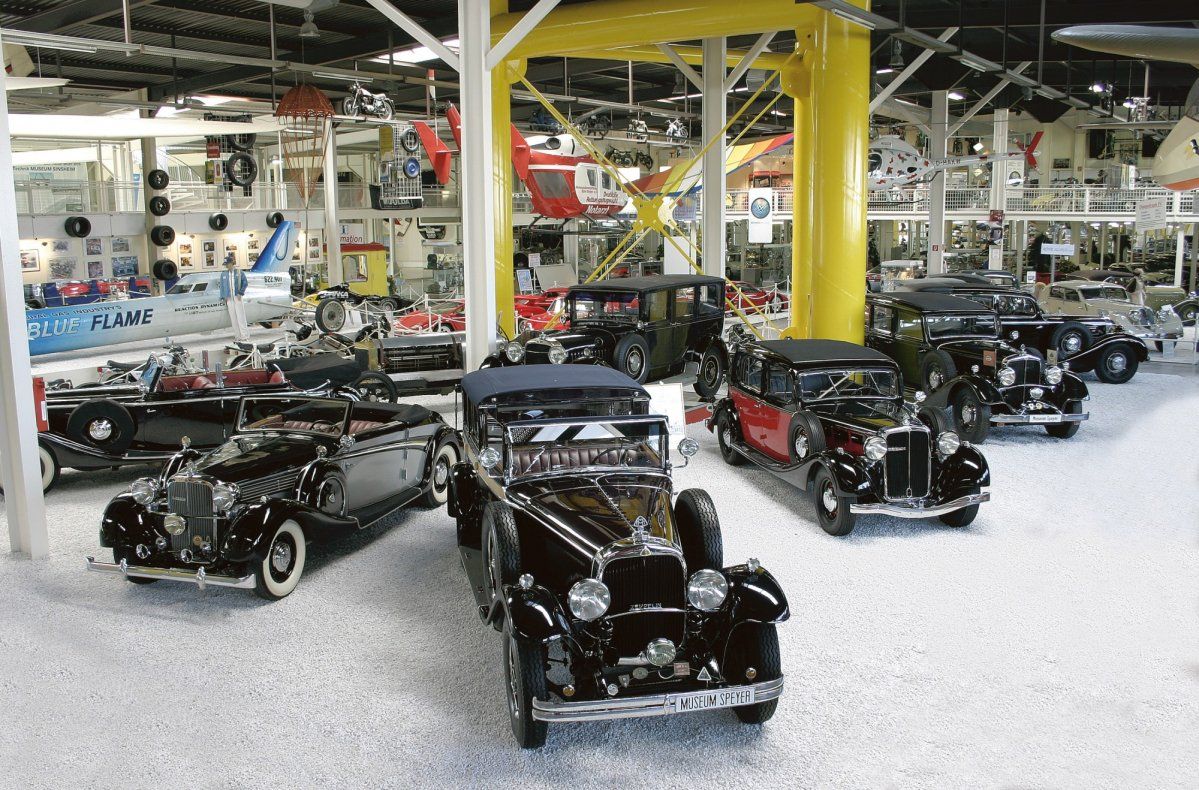 The Sinsheim Museum is heaven also to the military buffs. It's filled to the brim with tanks, planes, guns and all kind of military machinery. Plus, one of the largest collections of Formula 1 cars I've seen to this day. The Jordan in which Michael Schumacher made his debut in Formula 1 is here, along the the very special Tyrell P34, the only Formula 1 car with six wheels and many many more racing cars. Head to the photo gallery to see the complete collection. 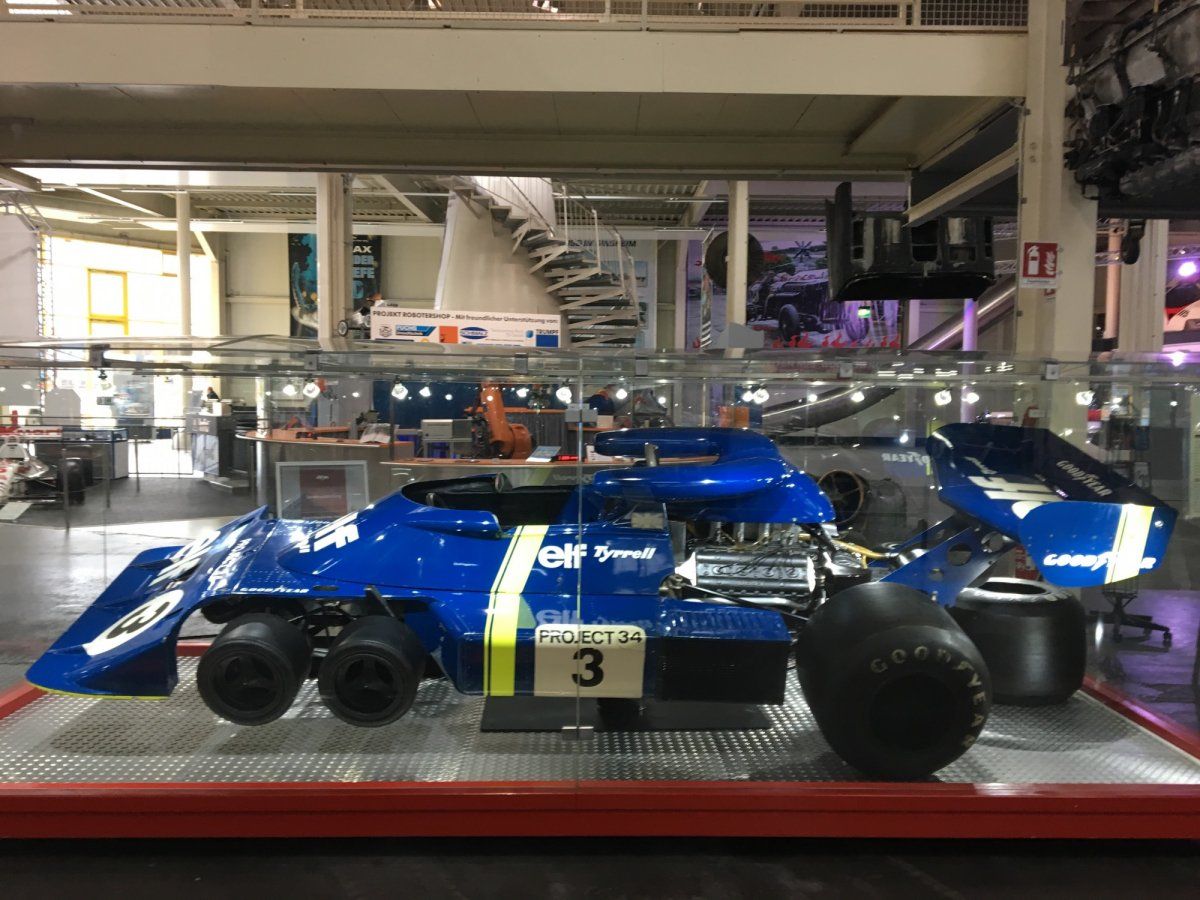 And since we were in the area, it was mandatory to stretch the legs of our Opel Insignia ST to the city of Stuttgart, home of two very important car brands. Porsche and Mercedes-Benz have beautiful modern museums in Stuttgart and you should not miss them. 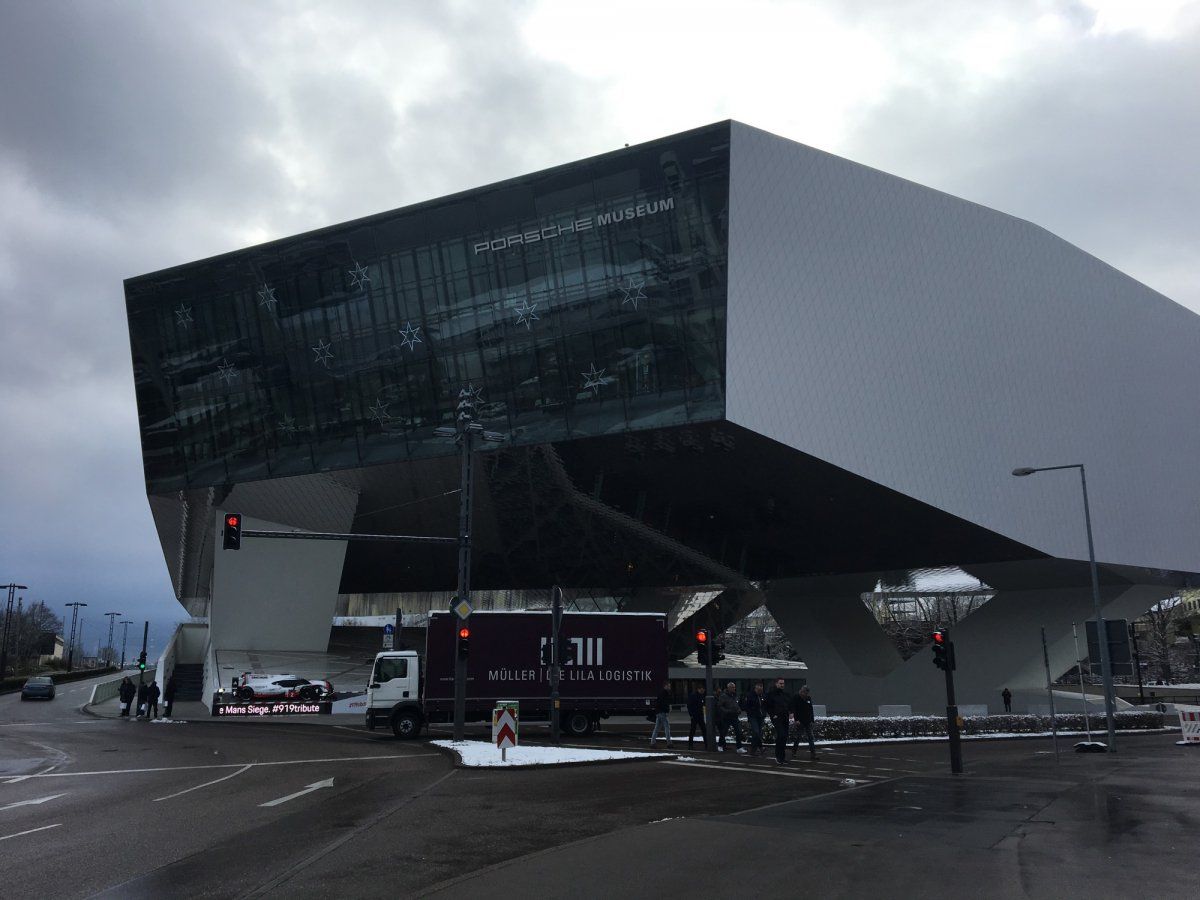 Pro tip: Stuttgart is a pretty busy city, and traffic can be quite heavy, so it's better to use the train to reach the museums. For Porsche Museum hop on the S6 train from Hauptbahnhof station (that's Main Station in German). For Mercedes-Benz, use the S1 train. Porsche Museum admission fee is €8, while for Mercedes-Benz Museum you need to pay €10. By presenting an entrance-ticket of the Porsche Museum you will receive a 25% discount of the regular ticket price until 30 June 2020. 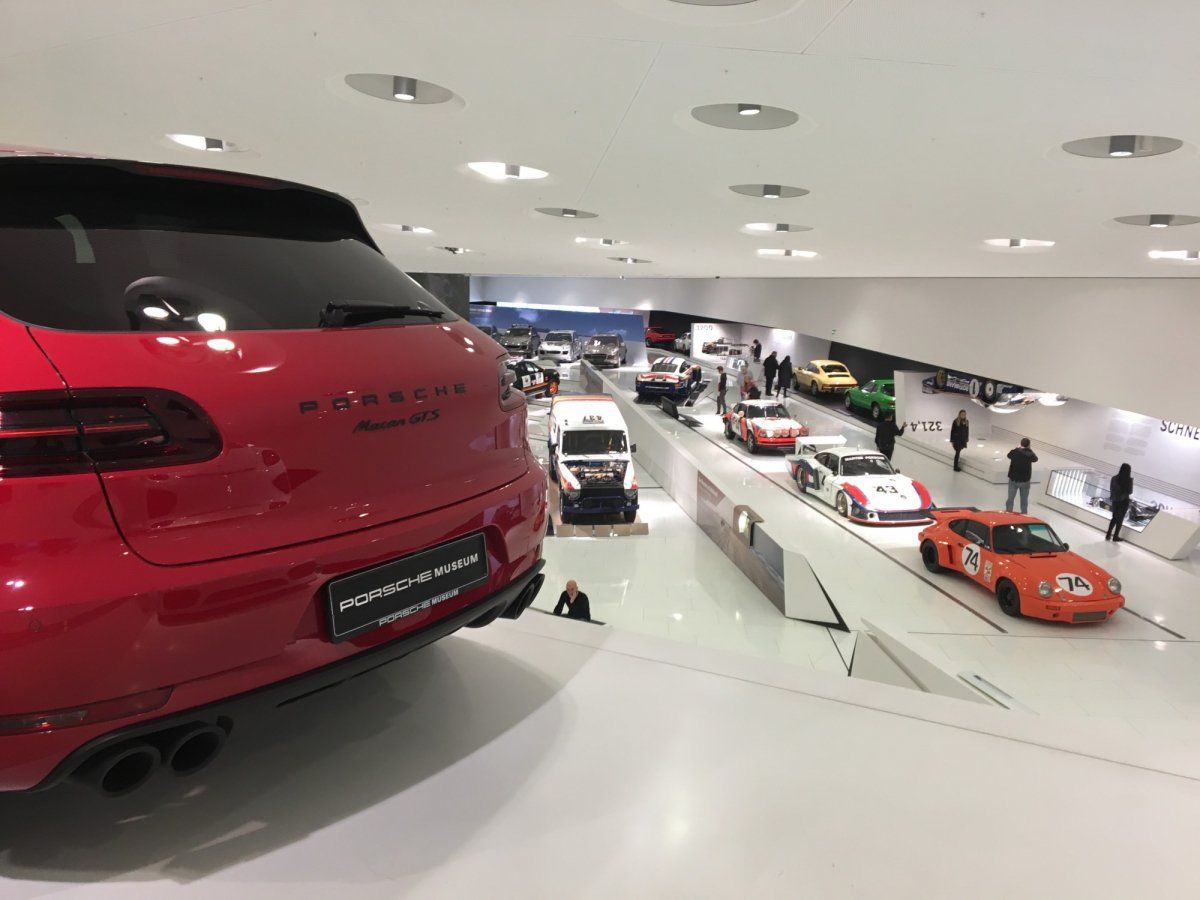 Second pro tip: when in Stuttgart, you may want to stay at the Neotel hotel. It's based in a converted office building that belonged to the Neoplan bus factory and it's filled with bus memorabilia. It even has a small museum nearby, home to some 10-12 old German buses. 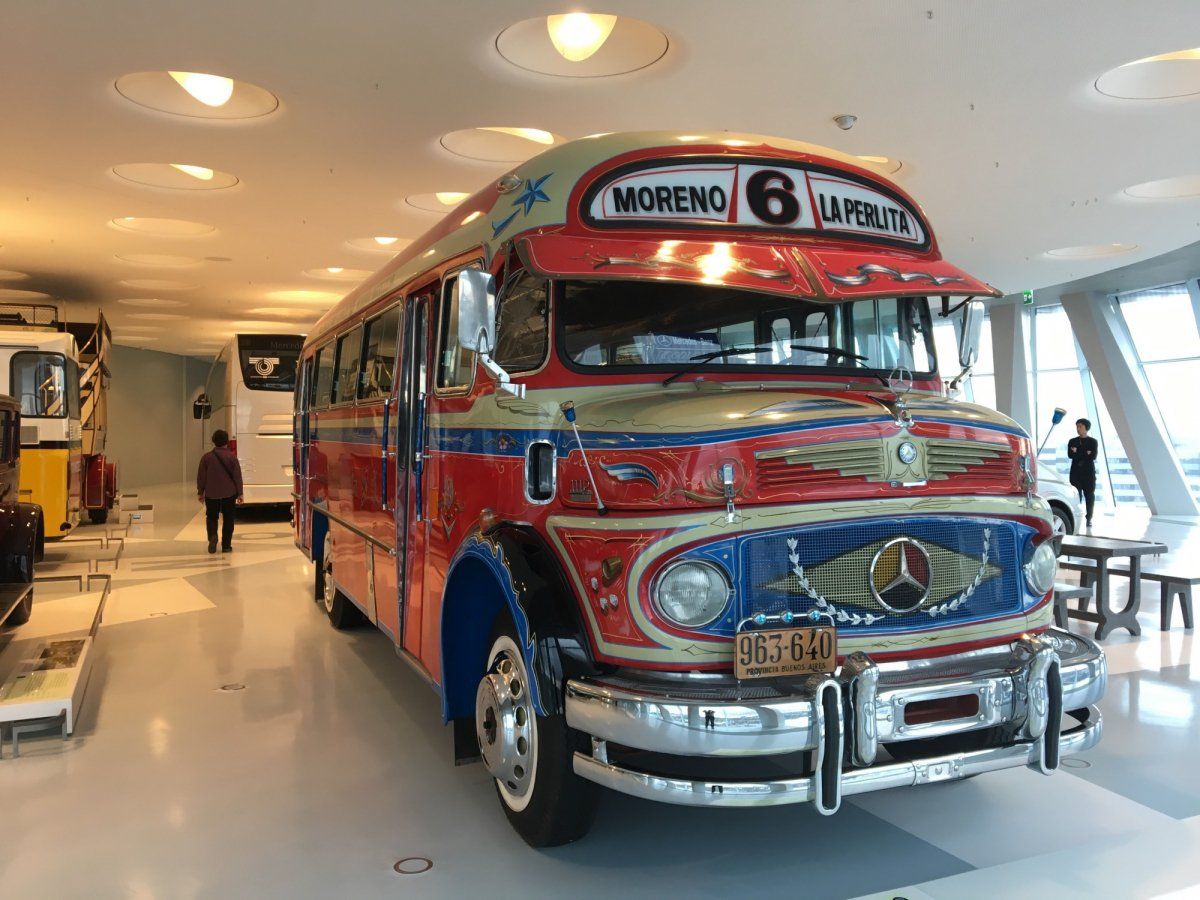 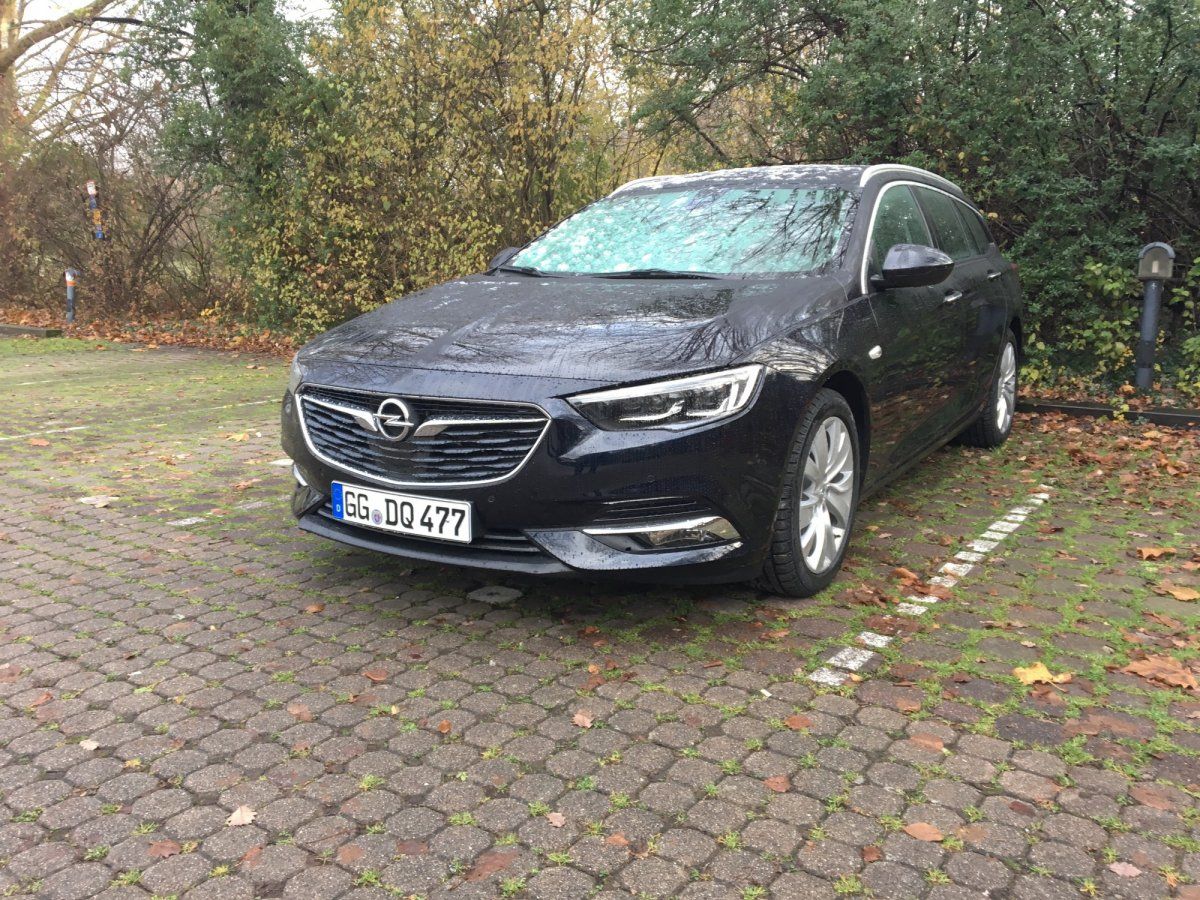 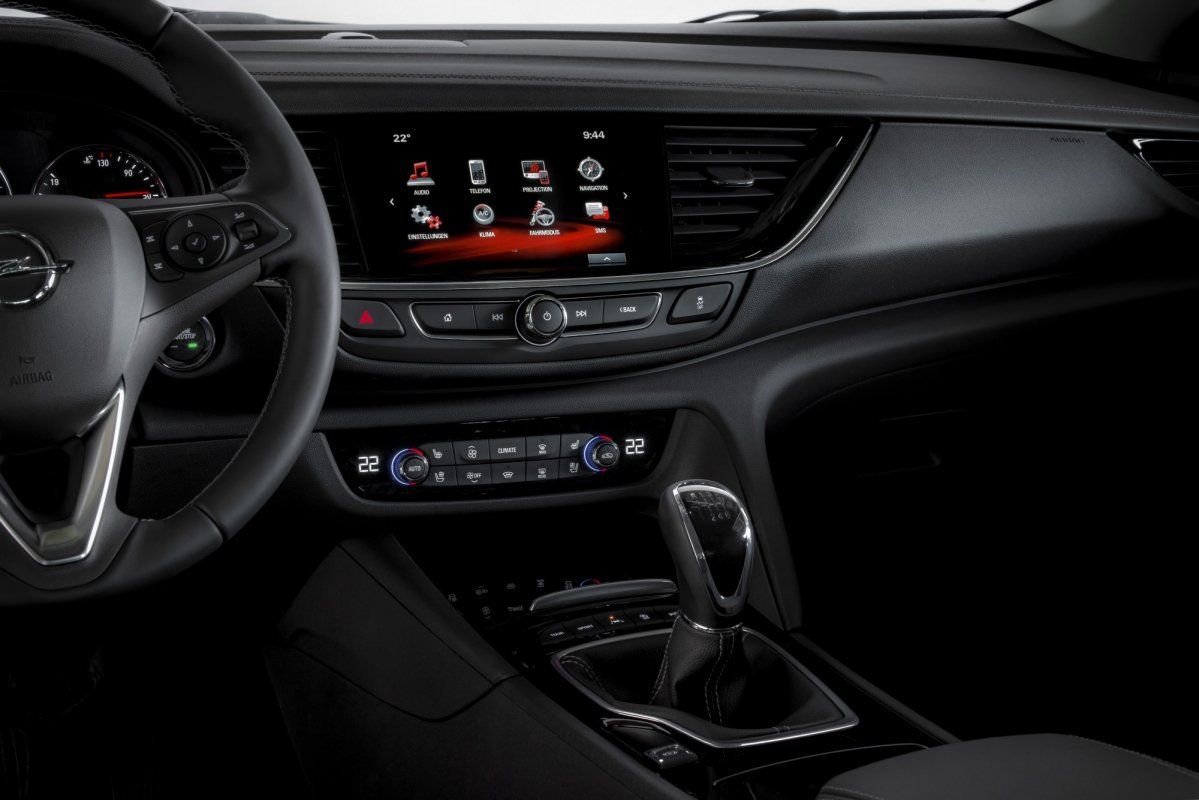 The huge trunk and its electric tailgate was the first thing we loved about this car. The cargo area offers 560 liters of spate, enough for a lot of bags. The electric tailgate can be opened from the key fob or by kicking the air under the car where a sensor will pick up the motion and open the trunk. A logo will then be projected onto the tarmac to mark the spot. This feature is extremely useful when you have your hands full and cannot reach for the button on the key. 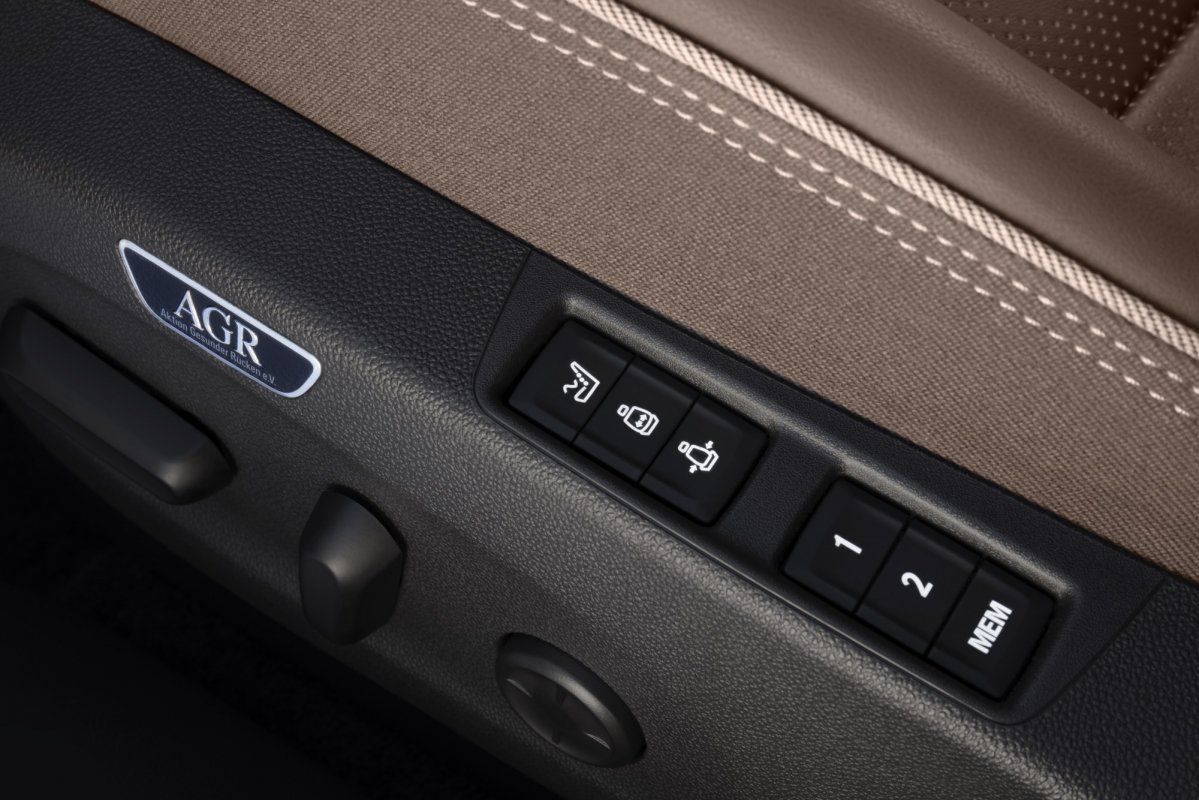 Inside, the Insignia has distanced itself from the interior of the previous generation. Goodbye buttons, welcome large touchscreen. Everything is where you expect it to be and that's a good thing. The glossy surfaces are not very touch-friendly, with a lot of fingerprints and smudges left, but besides that, the new interior is a huge step forward. 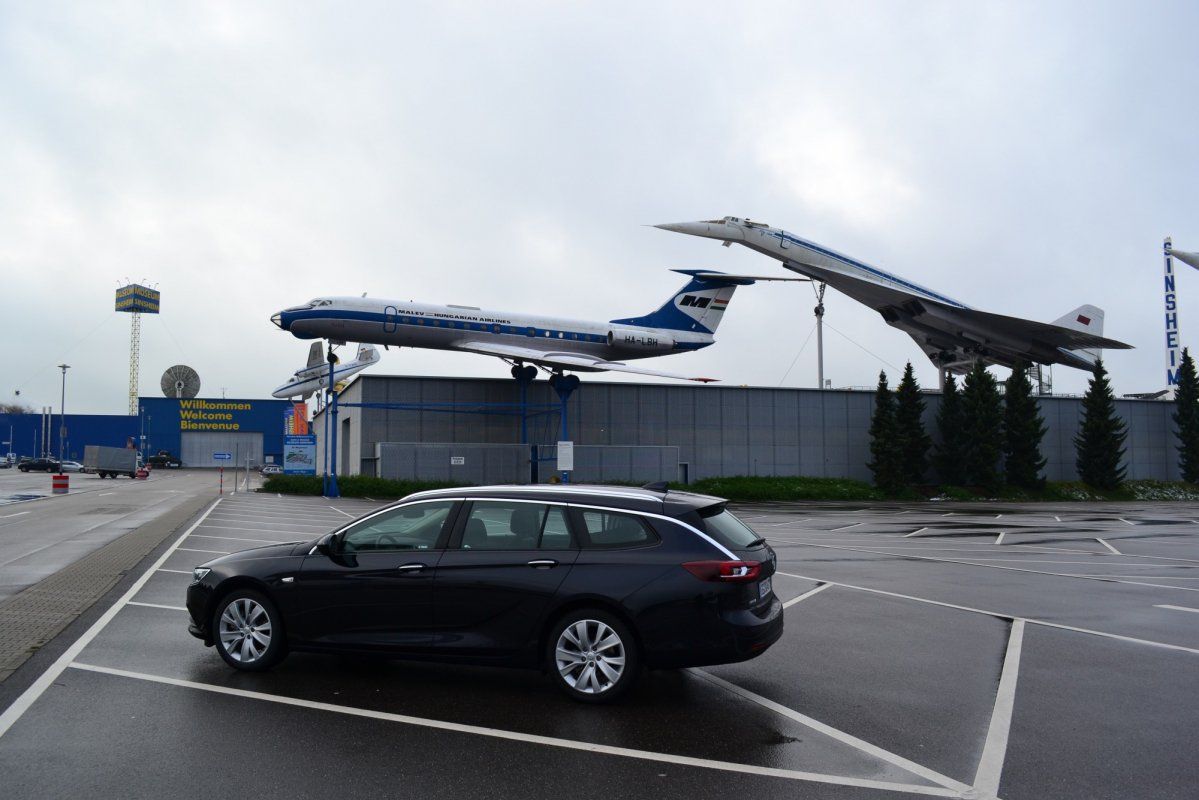 We've zipped across the German motorways mostly, and the new Insignia feels composed and comfortable. The steering is the weak point, with some very artificial feedback being sent to the driver. Things get better when you hit the Sport button. The manual gearbox also has quite a long throw. On the plus size, the 1.6-liter diesel engine is very frugal. On our 400-km voyage, the average consumption figure stayed at 6.2 l/100 km. Acceleration is good, and Opel claims the 0-100 km/h sprint time needs 10,5 seconds. Torque is enough, and you can pull quick overtakes. The long sixth gear helps the fuel economy cause when cruising on the motorway. 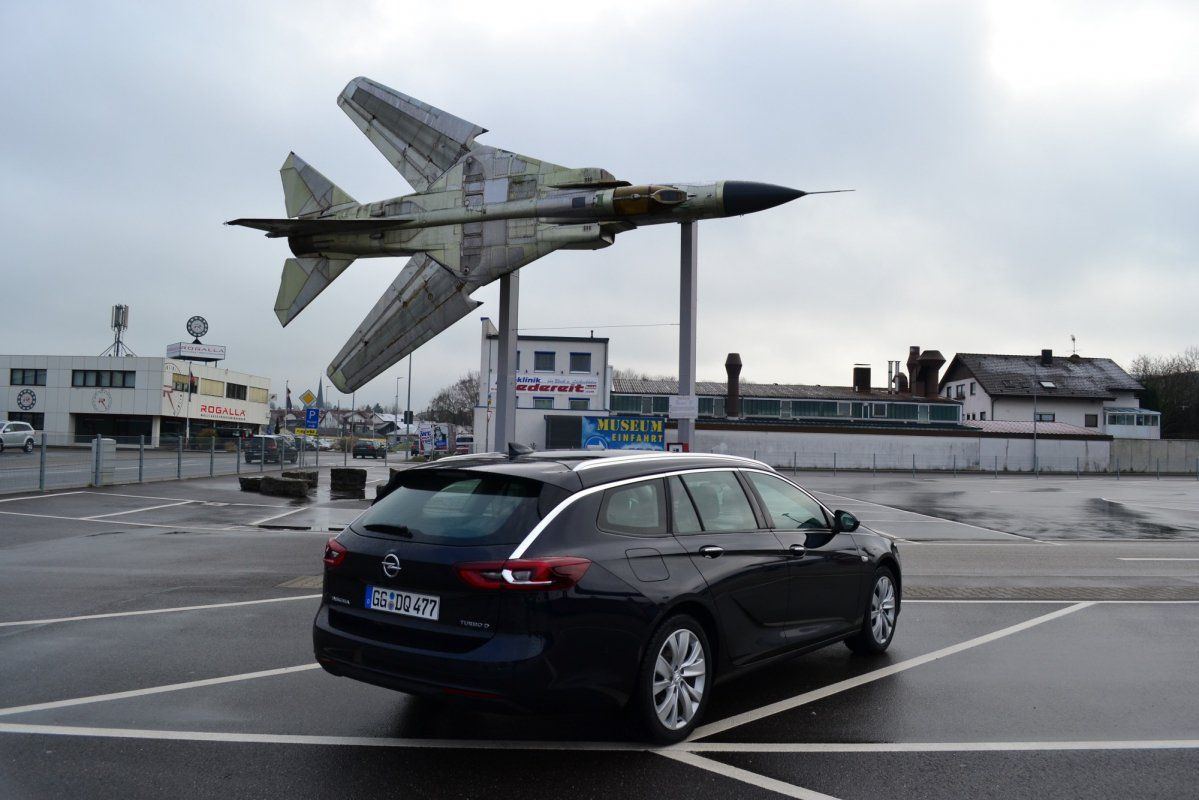