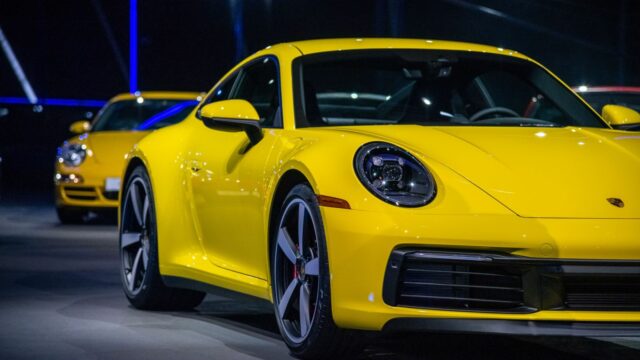 At a spectacular event hosted by Porsche Experience Center Los Angeles, Porsche has revealed to the world its most important model: the eighth-generation of the legendary 911

Somewhere in South Los Angeles, in the Carson area, you can find one of the most modern Porsche centers. The Porsche Experience Center Los Angeles has been chosen to host an event of great importance for the Stuttgart brand: the international launch of the new Porsche 911.

We have been invited to take part in this exclusive event and after 13 hours of flight we have reached the most important city in California, the place where Porsche sells the bulk of its 911 models in North America. Especially the cabriolet, because in Los Angeles it's always hot.

So, I summoned my inner Hank Moody and his beat-up Porsche 964 from the Californication series and went to witness live the launch event of the 992 generation.

Even from the entrance, we've spotted the presence of important names. Maria Sharapova, the famous tennis player and Porsche's ambassador, was attending the event. Mark Webber, former Formula 1 and Endurance race driver, was the designated host. Also, a list of important names from Porsche took to the stage. Oliver Blume, CEO of the Stuttgart brand, was the one who had the important mission to introduce the latest 911 to the world. Christina Nielsen, Porsche’s IMSA American championship race driver was also present alongside famous Hollywood figures, including American actor Armie Hammer.

Porsche chose California to launch the new model because it has one of the largest customer and fan bases in the world. Porsche Club North America has over 130,000 members and the Porsche 911 is particularly popular in California.

The show of light and sound was opened by all seven generations of the 911 brought directly from the Porsche Museum in Stuttgart and backed by an impressive video show where Ferry Porsche's voice saying "to create something timeless" gave the audience chills down the spine.

At the end of the show, the new Porsche 911 992 made its entrance to the local audience and to everybody watching the online event from California.

Porsche has officially introduced the 911 Carrera S and 4S, both powered by the 3.0-litre turbo flat-six engine. It now delivers 450 HP and is mated with the twin-clutch eight-speed PDK automatic gearbox. The manual box will be launched next year.

The new model also brings a series of new electronic systems. The new Porsche Wet mode detects when the car is running on wet surfaces through sensors located in the wheel arches.

If these sensors detect a significant amount of water, the on-board computer will suggest the driver to activate the Wet mode, which will make the car much safer to run even in heavy rain conditions. Optionally, the new model can be equipped with Night Vision Assist, a system that detects obstacles with the help of an infrared camera.

Design-wise, despite the unmistakable silhouette, the new Porsche 911 can be easily identified thanks to its specially designed taillights. The two optical blocks are joined by an LED strip that provides a light signature specific to this model.

Up front, the round optical blocks use Matrix LED technology. The new model also uses different rim sizes. The front axle is equipped with 20-inch wheels, while at the rear we find 21-inch tires.

The quality of cabin materials and finishes is at the highest standards, as expected from a car manufacturer like Porsche. The wheels are beautiful to look at, and the combination of different sizes for the two axles looks excellent. The rear with the LED strip linking the two stops is perhaps the most attractive cue of the new model, while the posture has remained as impressive as ever.

But there are some elements that did not please everyone at first contact. The first strange element lies with the new exterior door handles. Porsche has dropped the out-of-body handles for new, more aerodynamic handles.

Although they do not fit nicely into the bodywork, like it’s the case for the like of Tesla’s models, Range Rover Velar or Jaguar I-Pace, they adopt an aerodynamic position while the car is on the move. But in order to facilitate the opening of the doors, the handles open slightly, giving the door a something-is-broken look.

Although the system is aerodynamically efficient, the handles look odd and almost as if they are defective when they adopt the open position.

Then there’s the rear spoiler hidden in the bodywork. Like every 911, the new generation needs a wing that comes up at the touch of a button or when speed exceeds 120 km/h (74 mph). If up until now this solution was elegantly integrated into the body line even when it was raised, for the 992 generation it occupies a large part of the rear end and doesn't serve well the car’s tail aesthetics.

Inside, the new 992 adopts the digital dashboard fashion, but keeps the classical theme of the round clock, with a central analogue rev meter. The central console, however, which for the 991 generation adopts a handful of switches, is now devoid of any buttons and knobs. Left and right are plastic elements that keep company to the small lever of the automatic gearbox. All the important switches have been moved to the top of the console for a breezier interior.

In Los Angeles, we had the opportunity to talk with Thomas Krickelberg, the man in charge of the 911 model line, and we learned that the new model will have all the versions we got used to – some of which will be released next year. So, we will see the Carrera, Targa, Turbo, GTS and the lot.

Regarding a possible hybrid version of the Porsche 911, it still does not officially exist, but the 992 generation is ready to support it if the decision is made. Additional space was cleared up between the engine and the transmission, which may host an electric motor for completing a hybrid propulsion system.