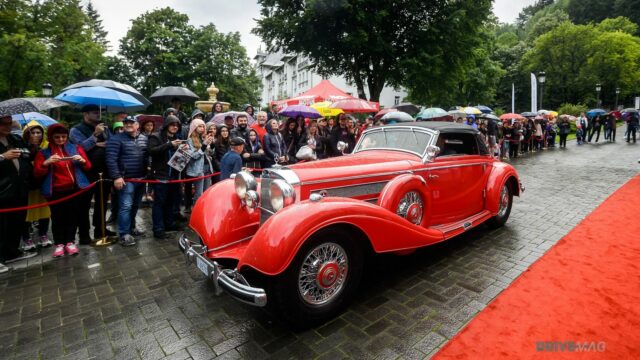 Started in 1934 at the Royal Castle of Peleș, in the Transylvanian Alps, the Sinaia Concours d'Elegance is now gaining international weight

Talking about tradition and elegance at the feet of the incredible Peleș Castle feels just like a natural extension of the gorgeous Neo-Renaissance building. Inaugurated in 1883, the same year Karl Benz was incorporating his Benz & Cie company, and three years before the first car in the world, the Benz Patent-Motorwagen, started rolling, the Peleș Castle is perfectly fit for a Concours d'Elegance on par with any other major classic car event.

The event restarted small after Communism fell in Romania but grew from year to year and now brought together 30 cars from four countries, over six categories.

Entry is free for visitors, and you could also use the day to visit both the castle and see the retro parade – a feat that's no longer possible at most other elegance competitions.

You could also talk to the car owners or even check out the cars' interiors because many are willing to help you appreciate the things they love.

It's easy to get to Sinaia: just take the train from Bucharest's North Railway Station. One and a half hours later you'll arrive in the gorgeous Sinaia rail station, at the feet of 2,500 meter-high Carpathians, at the border with Transylvania.

There's no Dracula in sight, though, just a gem of a mountain resort built 130 years ago by Romania's nouveaux riches of the time.

Many of the cars on display had unique stories to tell. The `Best in Show` winner, the 1937 Mercedes-Benz 540K Cabriolet A Sindelfingen, could easily have a multi-million dollar tag attached to it (one of these sold for $9,900,000 at Sotheby's).

That is, if its owner, the Romanian billionaire Ion Țiriac, a former professional tennis player, would sell it. Which will not happen, as the car already won several international elegance competitions over the years and was a part of Ecclestone's collection for several years. You just don't let such a gem go away.

Other cars were not as expensive but caught the attention and affection of the public. From the mint-condition 1964 Ford Thunderbird (also a pleasure to hear, not only to behold), to the posh 1938 Adler Trumph Junior Cabriolet by Karmann or the 1970 Jaguar E Type, there was every type of classic car for all kinds of car lovers.

One of the highlights was the extremely rare 1967 Ghia 450 SS – one of the just 52 models Carrozzeria Ghia built directly in its entire history. It was penned by none other than Giorgetto Giugiaro himself (hence the resemblance to other legendary cars like the Lamborghini Ghibli) and sold almost exclusively to Hollywood stars.

It combined a Fiat 2300 with an American V8 from a Plymouth Barracuda Formula S – the 235 hp and 280 lbs-ft 4.5-liter Commando 273. It cost twice than a fully-specced Corvette and sold only for two years (66-67), but now is a connoisseur's choice, especially for those wanting to start a collection with `affordable` cars (at under $170,000 for a pristine-condition example).

Speaking about affordable classic cars, we also loved the 1940 Packard One-Twenty Convertible (you can get one in very good condition for $60,000 or less), the 1936 Plymouth P2 DeLuxe and the 1987 Mercedes-Benz 560 SL (similar price tag). Of course, car lovers will always tell you that it's not about the money, it's about the passion.

They often start by buying cars at a third of their Concours-level prices and invest a lot of time and money into bringing them to life again. Judging from the love with which they cared for their precious cars, we tend to agree.

BMW also had a big presence at the event, with a mint-condition 1971 BMW 2002 (the Series 3 grandfather), an exquisite Isetta bubble car and two The New Six cars – the E3 and E9.

The latter was displayed in the guise of a BMW 3.0 CSL, a 100% perfect replica, complete with the 3.4-liter engine from the original CSL. In case you didn't know, the 3.0 CSL is the car that started the entire M madness at BMW.

We arrived there in the latest SUV to be launched by the brand, the new BMW X4 and had the pleasure to come back to Bucharest in the 2018 i8 Roadster – but more about these cars in subsequent articles.

If you thought about visiting Eastern Europe or, more specifically, Romania, make sure to come at the beginning of July, as in 2019 the event will most likely take place around the same date. It's no Villa d'Este (yet), but it's really entertaining!

SEE MORE: Lamborghinis just want to have fun on the Transfăgărășan, the most beautiful road in the world