If you love rallying, you have to go to Rally de Portugal

There are a few motorsport events in this world that every petrolhead must attend: Monte Carlo Formula 1 Grand Prix, Indianapolis 500, 24 Hours of Le Mans and Rally Finland.

But, if you ever get to Portugal in the month of May, an excellent alternative for Rally Finland is the very popular Rally de Portugal. 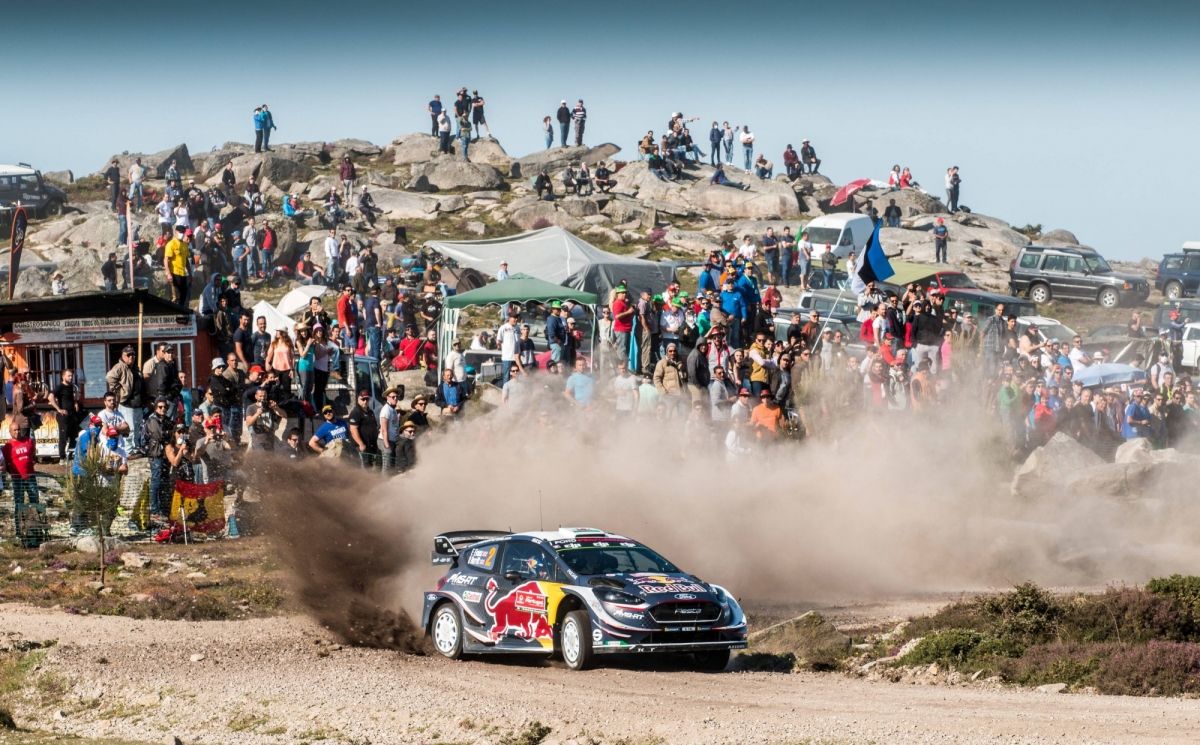 It has all the best ingredients: beautiful scenery, tough gravel roads and unbelievably enthusiastic crowds. 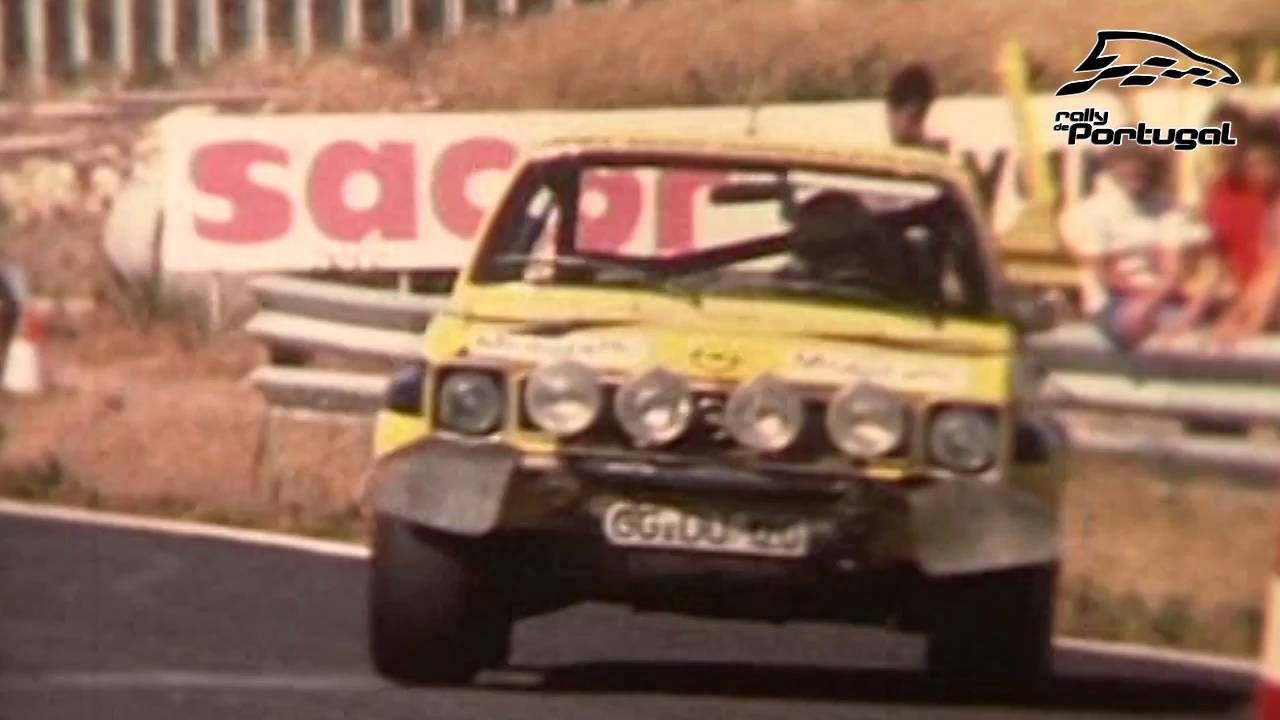 Two years ago marked the 50th anniversary of Rally de Portugal, 50 editions that delivered a lot of motorsport history. The rally is organised by ACP, Automóvel Club de Portugal, an association founded in 1903. In 1967, ACP put on the road the first edition of the TAP Rally, a competition which, within a short time, conquered enormous international prestige and only six years later joined the first World Rally Championship. 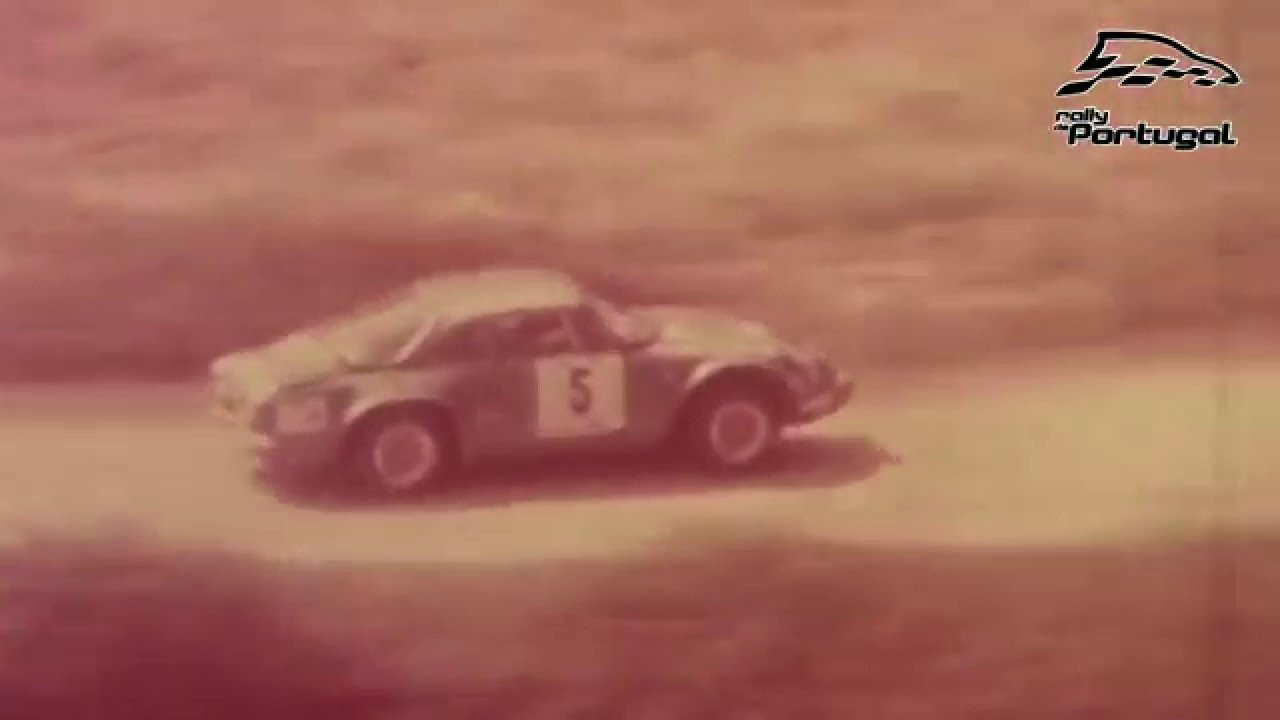 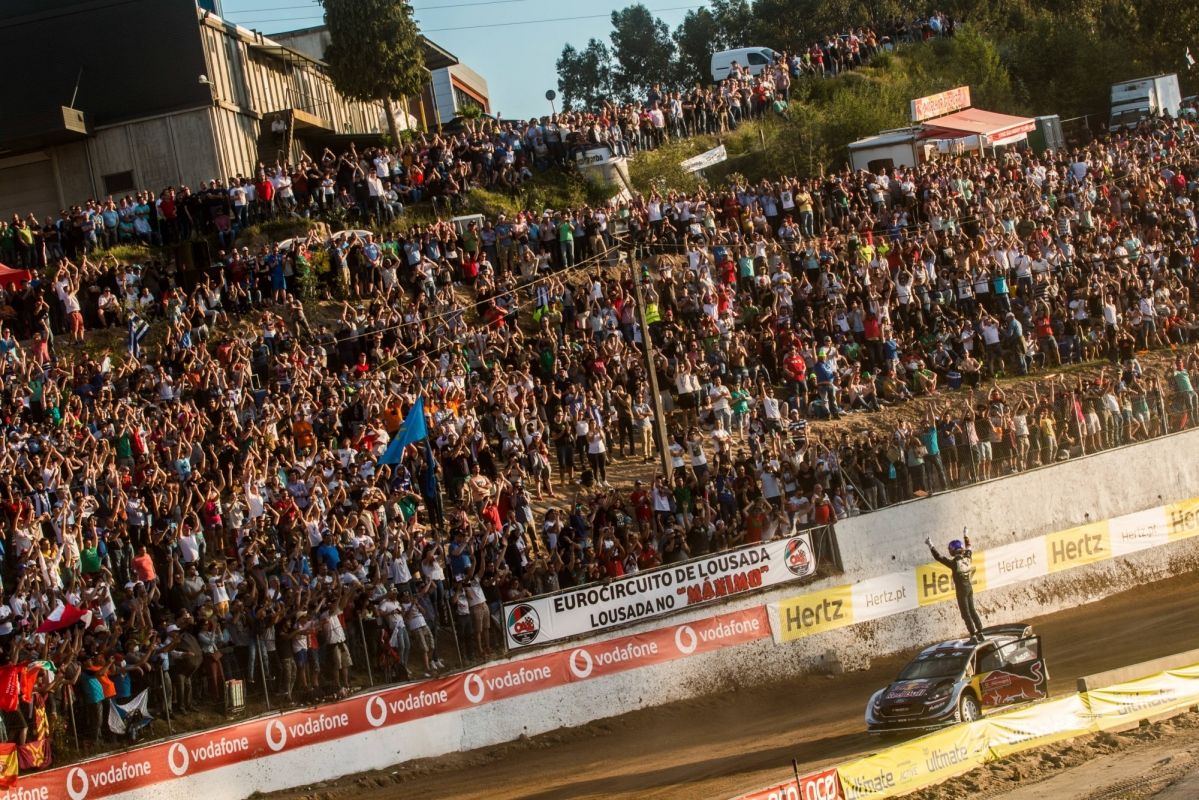 TAP Rally, and later Portugal Rally, has been responsible for glorious pages of success in rally and WRC history, having been awarded the title of “Best Rally in the World” no less than five times. 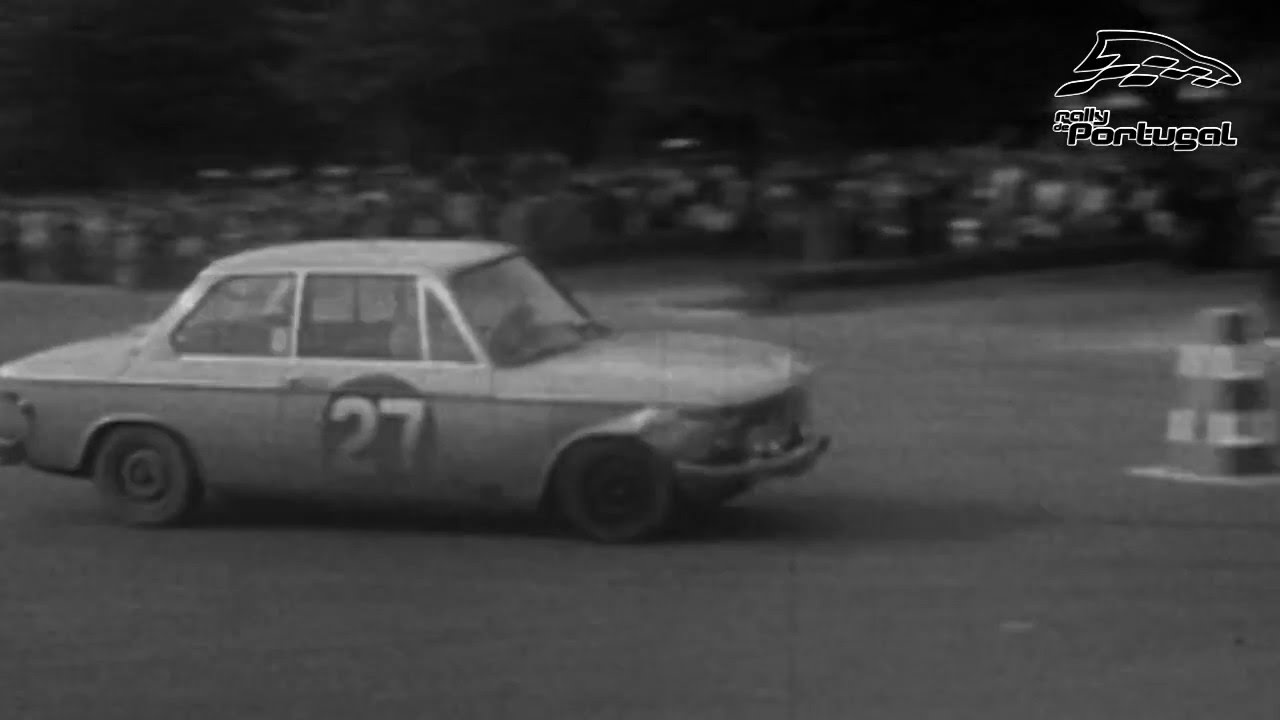 In 2001 the event was ruined by severe floods that affected the area around the city of Porto. In the aftermath, Rally Portugal endured a six-year hiatus from the championship, before coming back in a completely new format in the southern Algarve region. 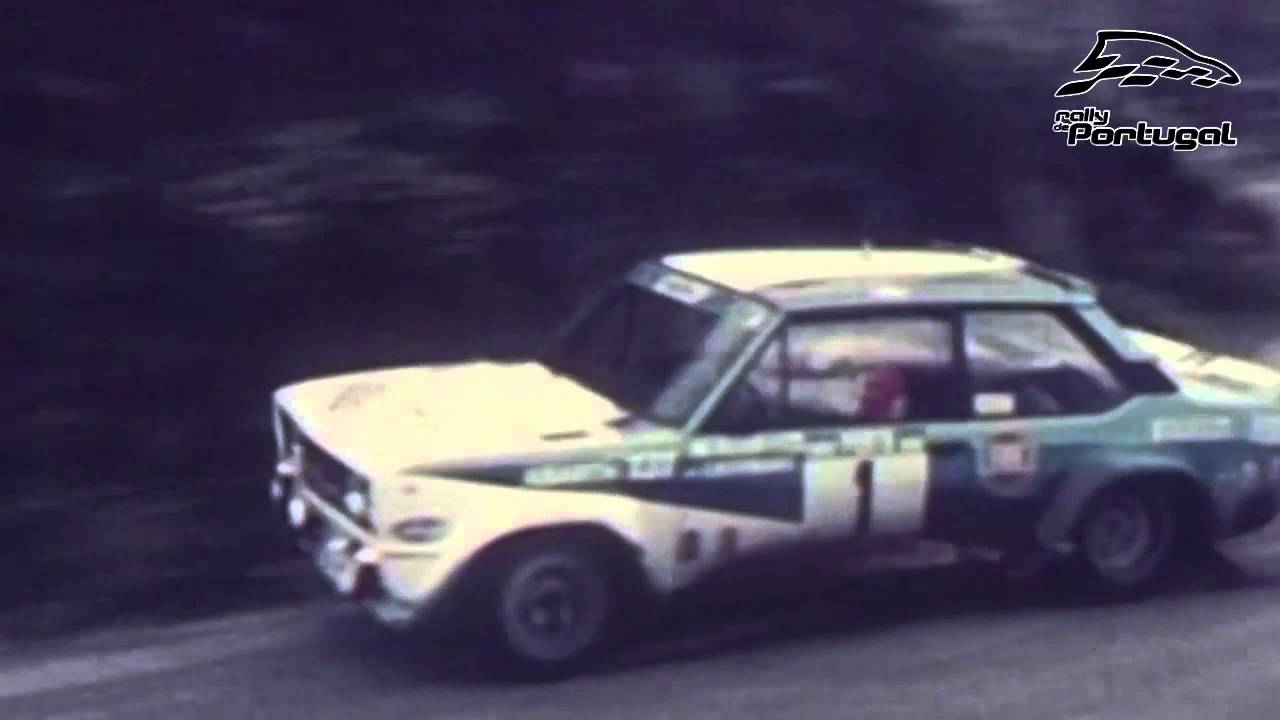 After having been withdrawn from the WRC calendar by FIA, the new ACP board, formed after President Carlos Barbosa’s election, worked very hard from 2004 on to bring the Rally de Portugal back to the WRC calendar - which was achieved in 2007, with the Algarve roads in Southern Portugal providing the scenery. 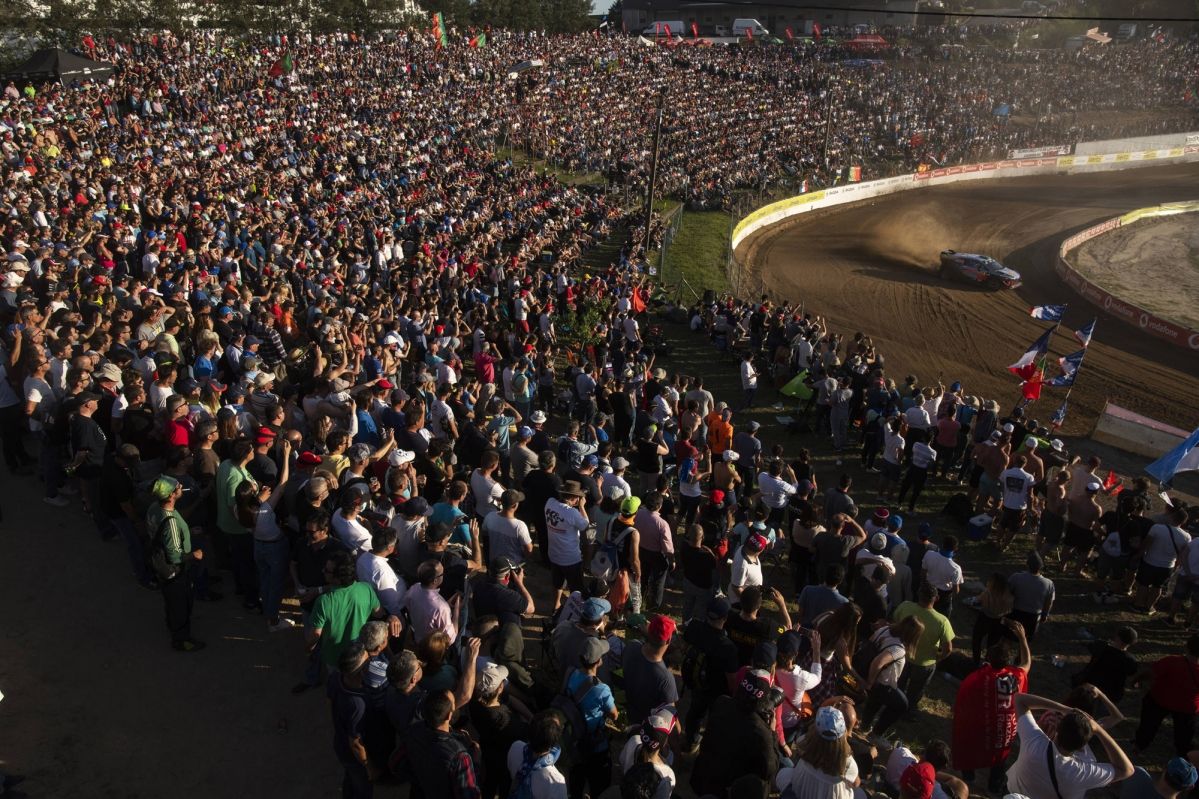 Since 2015, the rally returned to and around the beautiful city of Porto, in the Northern part of Portugal. The rally HQ and service park was set in the Matosinhos Exponor center near Porto. The last relocation meant a return of some of the most famous stages in WRC history; including the famous Fafe test, featuring the most iconic jump of them all.

For attending Rally de Portugal, you need to either fly or drive to the city of Porto. Alternatively, you can choose Lisbon as your airport, but bear in mind that Porto is 300 km (186 miles) away, yet well-served by the A1 highway.

There are hundreds of hotels in and around Porto, so lodging shouldn't be a problem. An alternative to Porto is the historic small city of Guimares. The town centre is a medieval settlement listed as a UNESCO World Heritage Site. Guimares is also the site that hosts the ceremonial start of the rally.

We've travelled to Porto to support our own Romanian rally driver Simone Tempestini and his co-driver Sergiu Itu, competing in the WRC2 class with a Ford Fiesta R5. 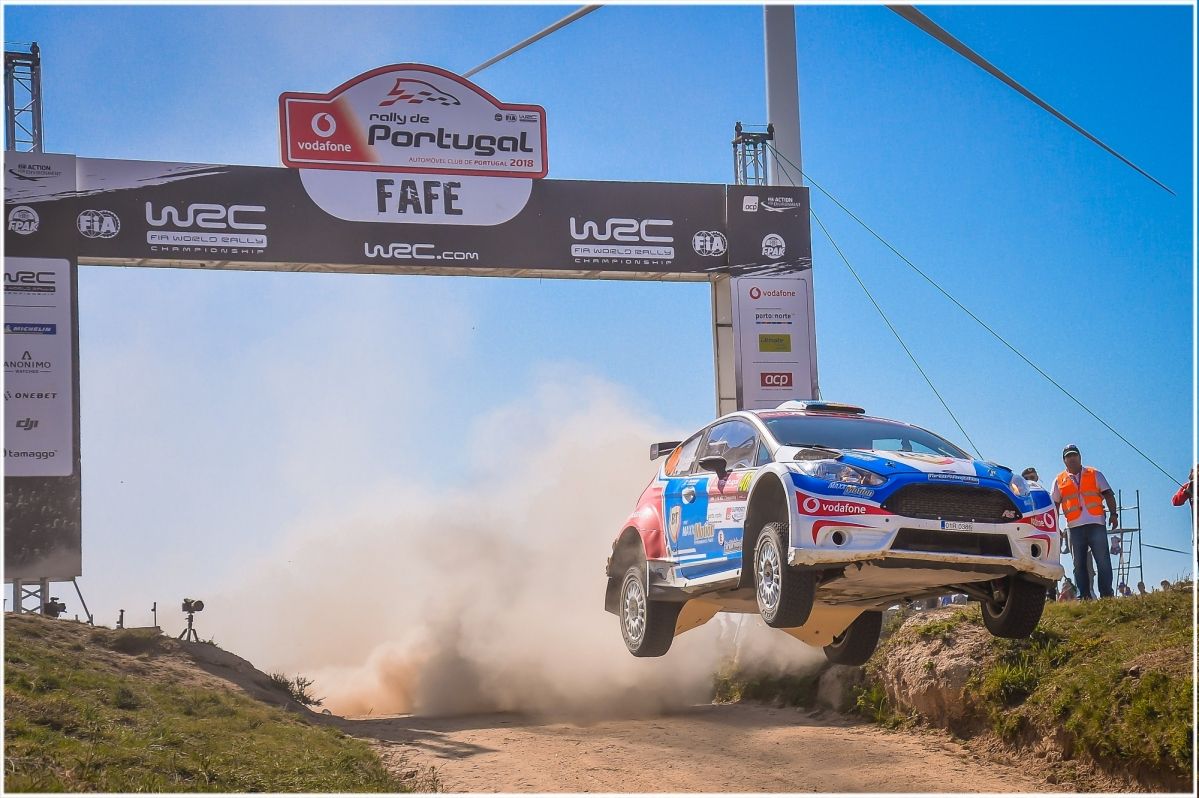 Rally Portugal poses some particularly tricky setup decisions for both teams and drivers. Tyre management is a big issue - whether to go with hard or soft rubber is often a tough choice. Soft offers more grip, however, push too hard on soft tyres and they will wear away quickly. The weather can also play a major role in deciding this rally, as conditions can alter rapidly on this part of Western Europe.

Stage spectators need to carry waterproof clothing and but also dust protection of some kind. The rally cars kick up a lot of dust and some protection for the mouth and nose comes in handy. Also, don't forget the sunblock lotion. 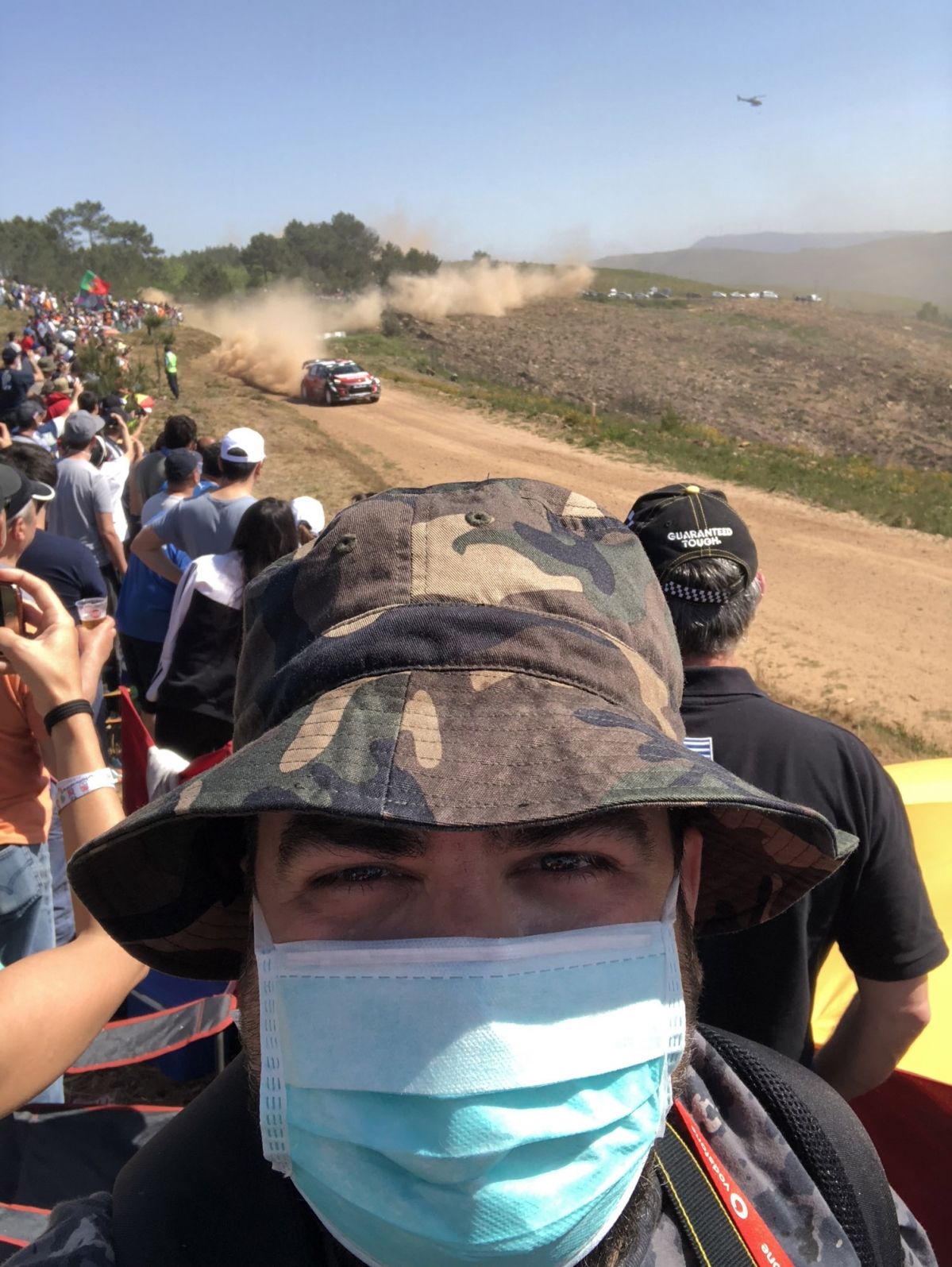 Our first taste of the crazy Portuguese crowds came at the Lousada Super Special Stage. It's the first test of the rally, held on Thursday evening at the local rally cross track. The crowds pack the place chanting and singing and they cheer every single driver. Local and Spanish drivers get the extra attention. 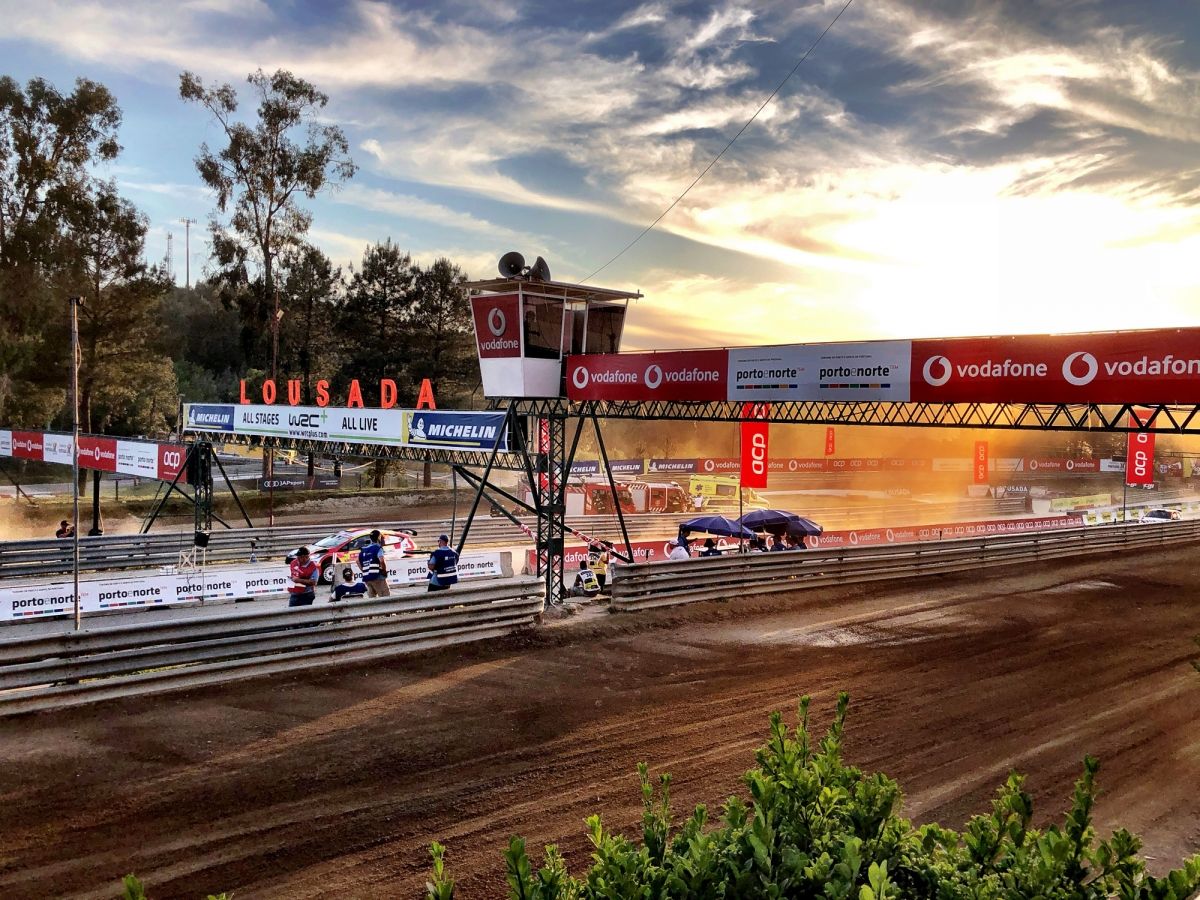 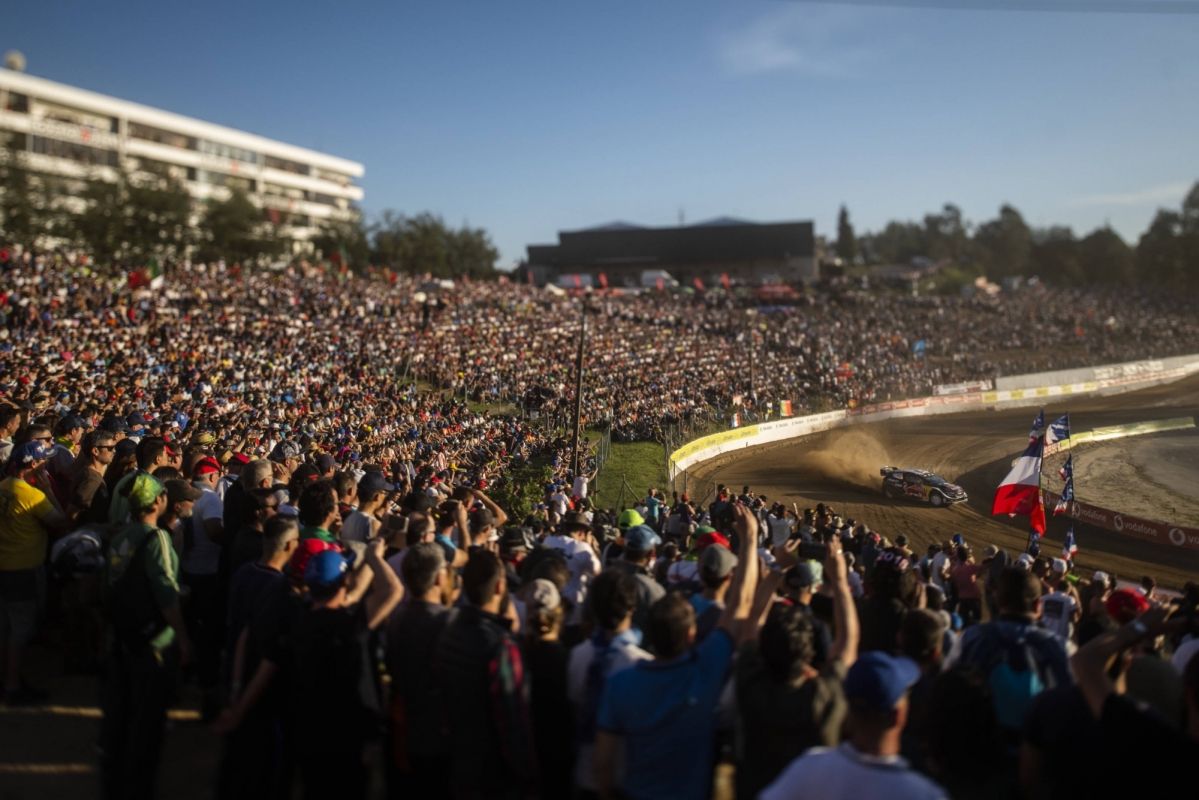 For the first day of proper rallying you'll have to head north of Porto. The special stages are almost 100 km (62 miles) away, near to the Spanish border. Viana do Castelo stage opens the day and features one of the rally's signature jumps. The stage is located near two cities, so it can become overcrowded with people. Arrive early and bring plenty of water and food with you. 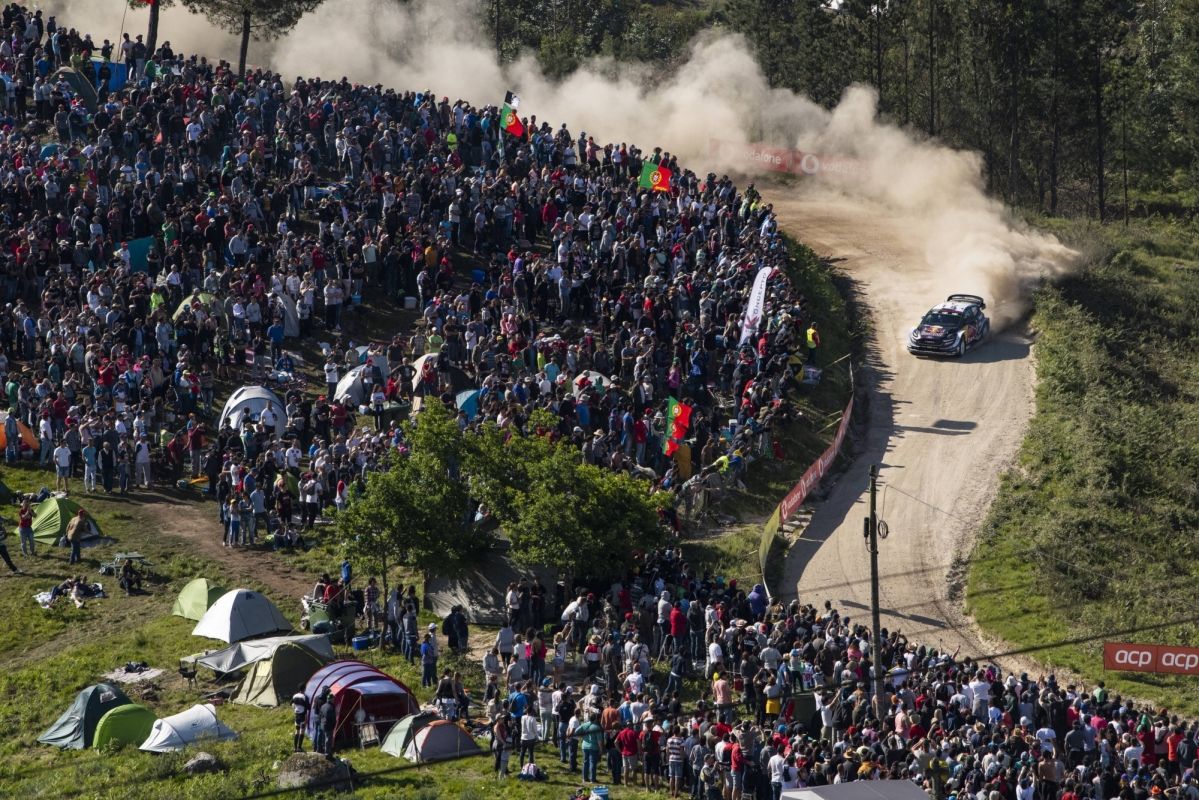 Next up it's the Caminha stage, the best pick for the day for spectating. One of the best spots is at KM 12 of the stage. In this area you will find a technical and fast sequence as well as an interesting jump amidst a beautiful landscape. It has the wow factor. To reach this point take exit 28 on the A28 motorway and at the first roundabout follow the direction ‘Dem, Miradouro N. Sra das Neves.’ After 600 metres turn right towards ‘Miradouro’ and you come to the stage after a further 1 km (1.6 miles).

The last stage of the day loop is the Ponte de Lima test. It's one of the longest and toughest stages of the rally with almost 28 km (17.3 miles) of hard gravel.

If you don't want to leave Porto, the 2018 edition of Rally de Portugal also featured a city stage, which ran twice on the streets of central Porto. It gathered a lot of onlookers, but vantage points are scarce. So, again, you need to come early to grab a good spectating spot.

Another three stages, each ran twice, make up for the schedule of the third day of rallying. First it's the 18 km (11 miles) Vieira do Minho, followed by the Cabeceiras de Basto test.

But the best choice for the public is the Amarante special stage, the longest test of the day with 37.6 km (23.3 miles) to run. 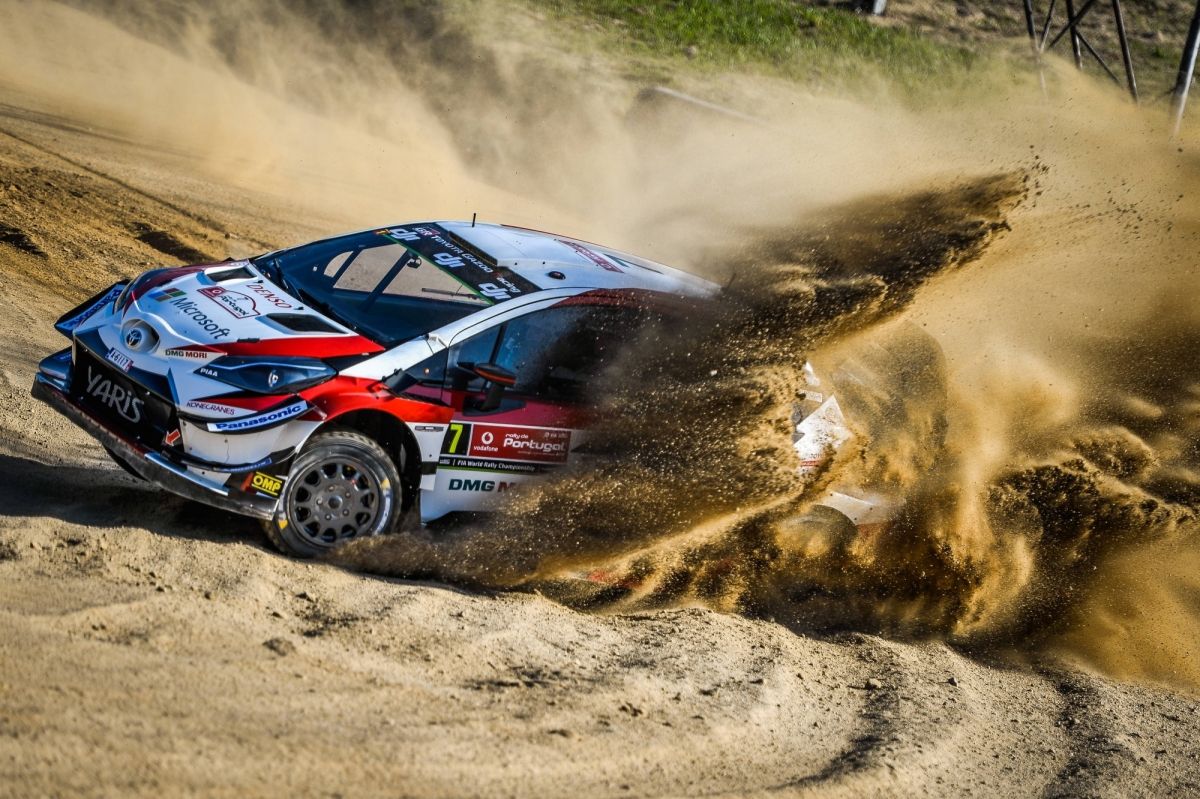 It also features the best viewing spots coming towards the stage end. At KM 28.2 there's a spectacular 90° junction right followed by a fast downhill section, in a proper scenic landscape. To reach this point take the access from the south at the main IP4 motorway junction 21 (KM 77) and from there you follow the municipal road signposted to ‘Marao’.

Next up is a tight right-hand hairpin, located in open countryside at KM 36.4. To access this place, leave the IP4 at exit 19 (KM 67) and then follow the N15 towards Aboadela. After a further 1.2 km (1,400 yards) turn right onto a gravel road and continue for 2.5 km (1.5 miles) to reach the location. There are a lot of food and drink options, with local food trucks selling the excellent Super Bock beer and other refreshments.

This is the day expected by the drivers and spectators alike. It features the legendary Fafe special stage and its jumps. Twice.

If you have never been to this stage before then you absolutely must experience it once in your lifetime. The two main options are towards the stage end, the first at KM 9 and the second at KM 10.7. At the KM 9 mark, there is a series of downhill gravel turns before the stage joins a wide asphalt section for just 100 m (330 ft), after which it turns sharply right back onto gravel. This complex of corners and junctions attracts thousands of spectators and the atmosphere is something special. The access is made straight from the town of Fafe to the junction on the main asphalt road. 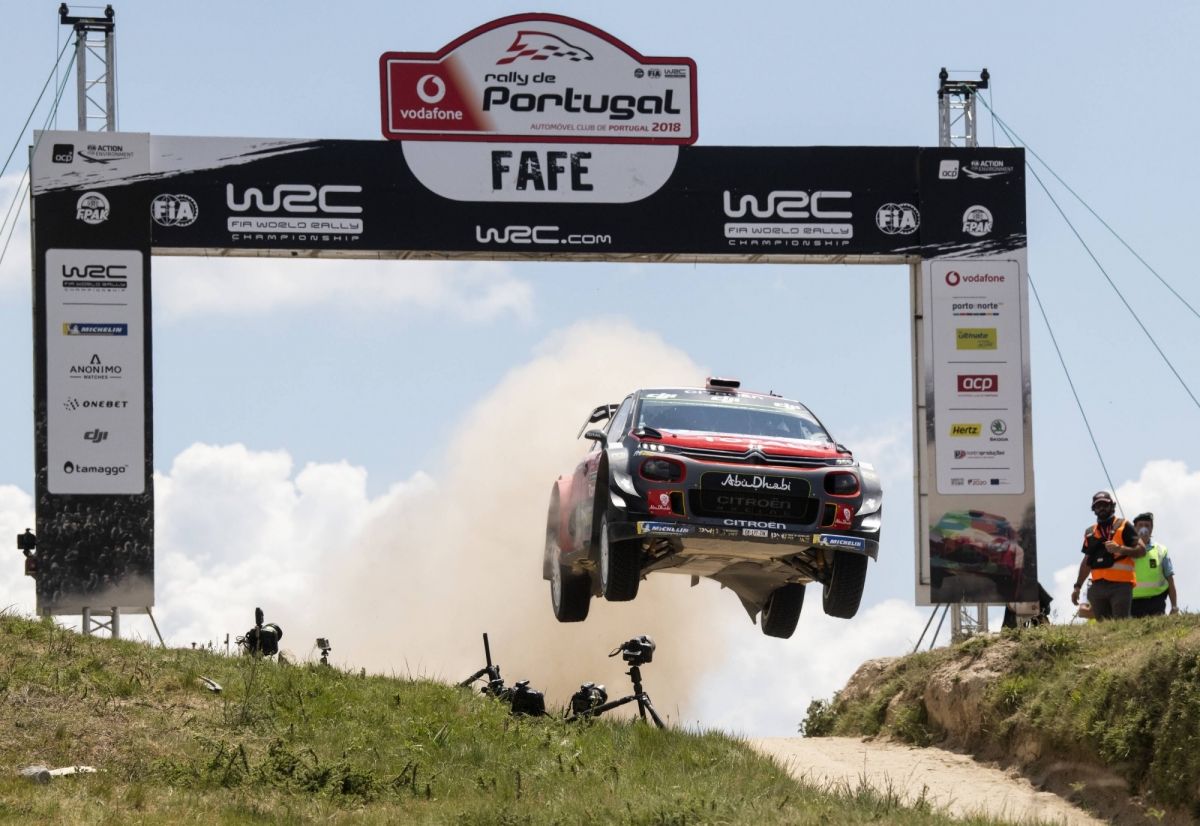 At KM 10.7 you will encounter the famous, also huge, Fafe jump, which is instantly recognisable from all the photographs taken there throughout the years. The access to the stage end is extremely busy and it's important to arrive extremely early. Locals camp here days before and spend the nights barbecuing and singing.

A second jump is located at KM 8, and this area is normally less crowded. 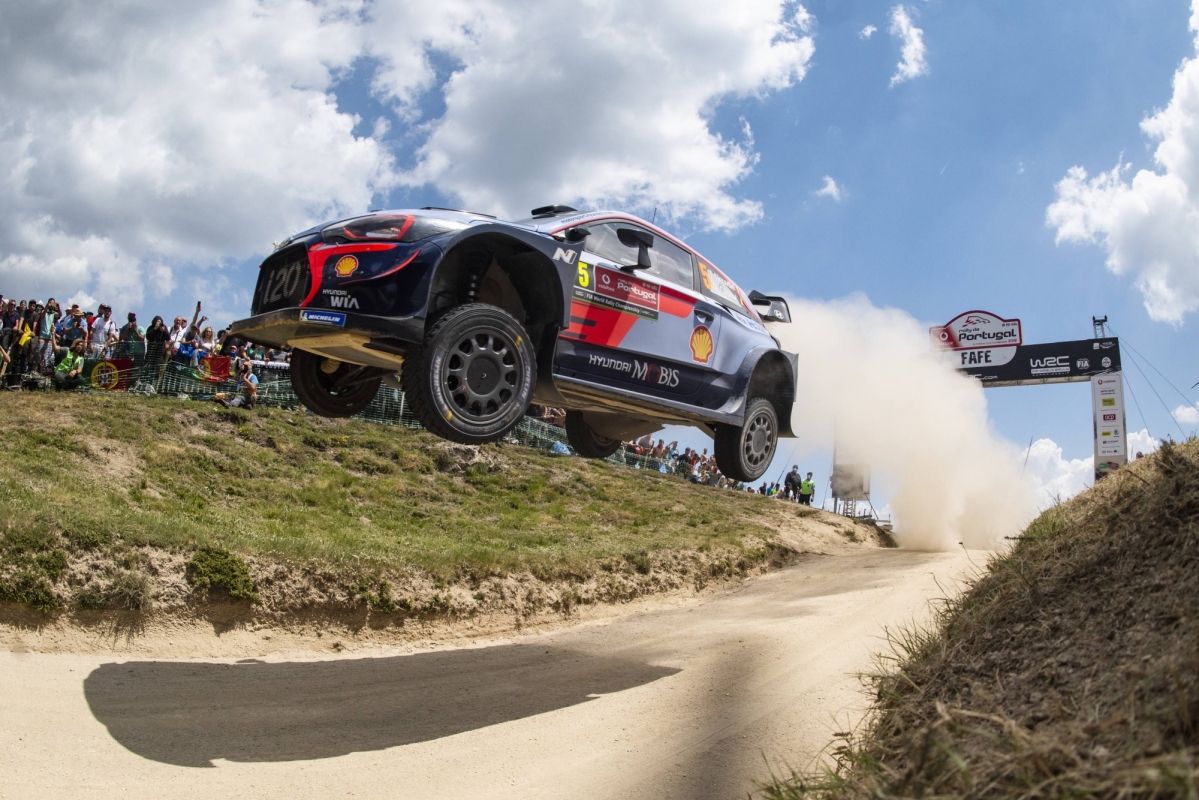 The 2018 was a tough rally for all the major teams. After an early mistake by current world champion Sebastien Ogier, the Ford M-Sport team was left with a podium finish for Elfyn Evans and Teemu Suninen. But Hyundai driver Thierry Neuville kept his calm and navigated the difficult rally for an important win and the points needed to become the new championship leader. 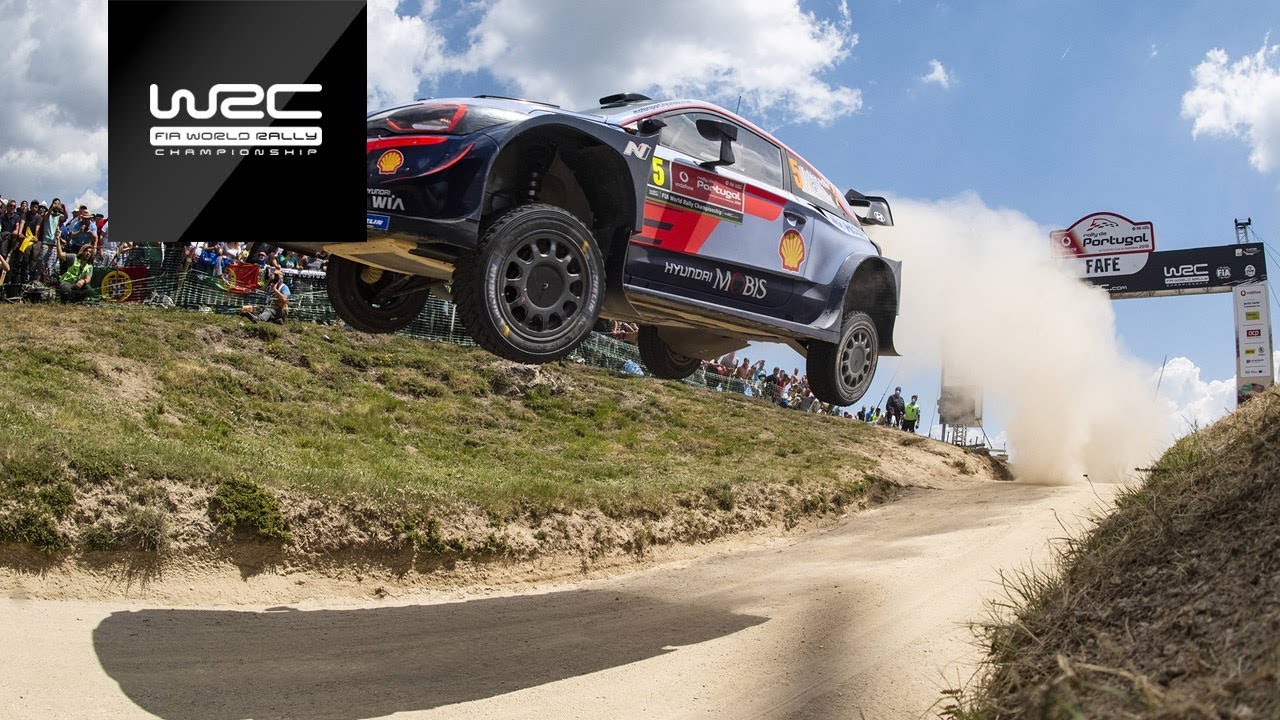 The rally was marked by a serious accident suffered by Citroen driver Kris Meeke. His car went off the road after a fifth-gear left-hander on the Amarante stage. The car flipped and hit the trees, which severely damaged the front end of the C3 WRC. Meeke and his co-driver Paul Nagle stepped out of the car, but Meeke accused back pain and was airlifted to hospital for checks. 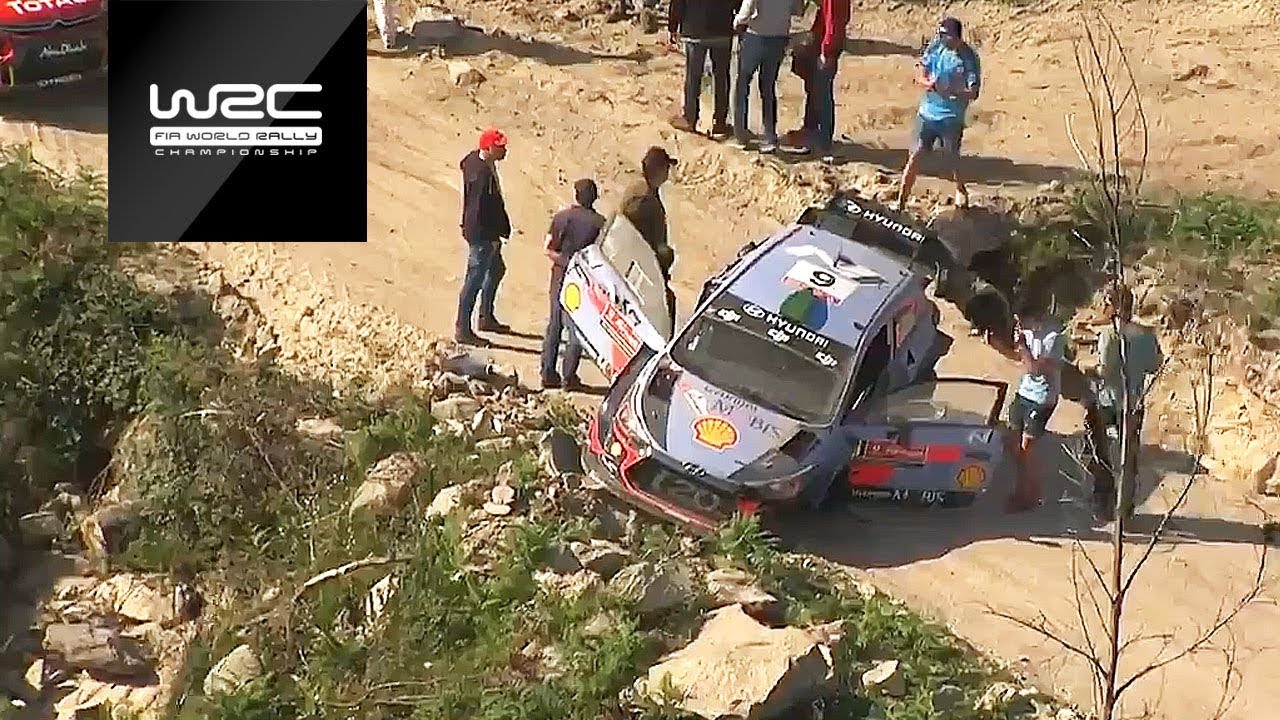 The car hit the trees in the A-pillar area and wrapped itself around the tree. The roll-cage and the high safety standard of todays rally cars saved the Citroen driver. 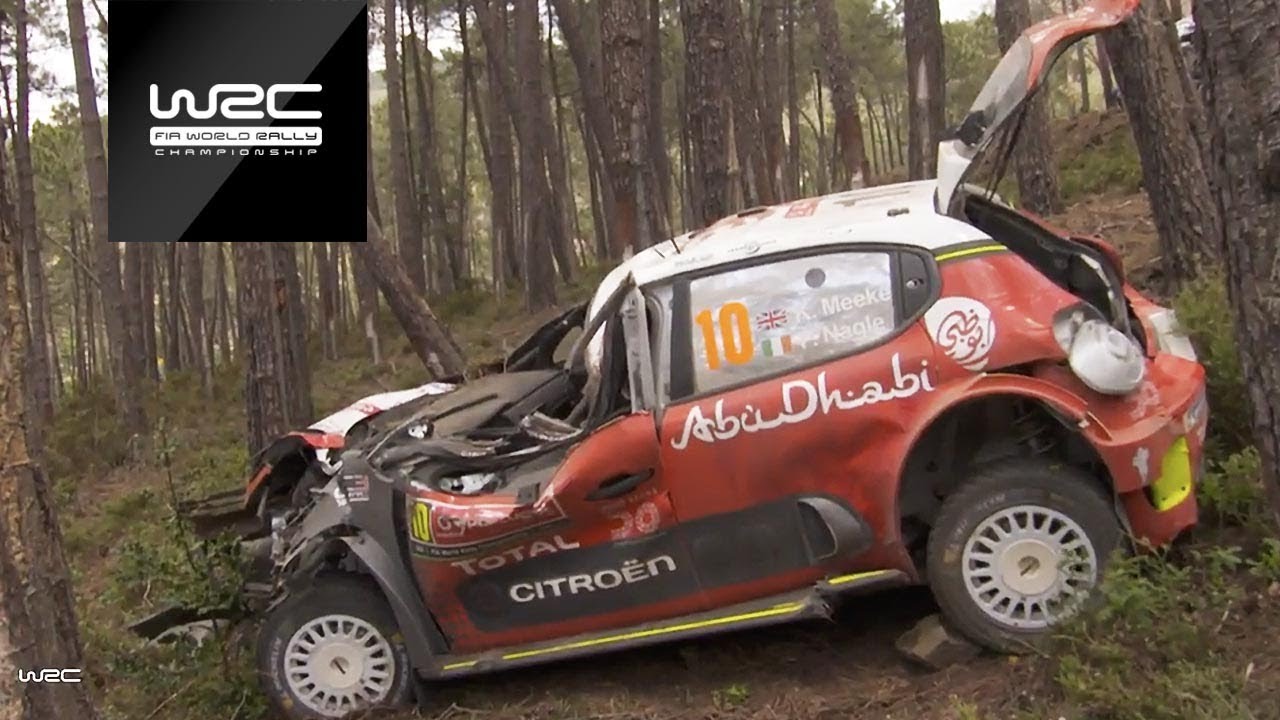 wrc rally portugal 2018 thierry neuville sebastien ogier fafe m-sport hyundai motorsport
By continuing to browse the site, you are agreeing to our use of cookies. Read more.
I Agree