Inside Bentley: where handcrafting holds together the universe of luxury

Getting chauffeured in a long-wheelbase Mulsanne by a driver called Nigel as I stretch my legs en route to Crewe draws a thick line over a wish that sits pretty high up on my bucket list. Because, you know, getting chauffeured in a long-wheelbase Mulsanne doesn’t happen every day. Crikey, it doesn’t happen every lifetime, come to think of it.

It was, however, the prelude of a visit to Bentley’s plant in Crewe, where the British carmaker was kind enough to invite us for a guided tour.

Bentley started making cars in Crewe back in 1946, after WW2. But the factory was erected on Pyms Lane way before that, back in 1938, with the purpose of building Rolls-Royce Merlin aero engines. Which it did - 26,065 of them, to be exact. Then Volkswagen came in 1998, bought Bentley and pumped £1 billion into the facilities. Today, the plant employs over 4,000 people and offers around 150 work experience positions to pupils from the Crewe area.

Once we’re all grouped up, a second Nigel takes over. Mr. Nigel Lofkin, currently one of Bentley’s customer hosts, has been with the carmaker for 38 years. His brother, for 40 years. That’s a well-cemented custom here - if your grandfather worked here, then you father worked here and there’s a high chance you’ll also work here.

Mr. Lofkin not only knows all there is to know about Bentley, but I’m willing to bet he knows almost every plant employee in Crewe by their first names based on how he casually responds to the “Hi there, Nigel” greeting: “Hey, Alex!,” “Morning, Dave!,” ”Alright, John?.”

“When customers are here, that’s when they start to realize that’s why they buy Bentleys. Because they’re expensive, but they’re also handcrafted, and they can understand where the value is. Not the cost. But the value. And there is a difference.”

The Volkswagen Group has brought in a wealth of modern manufacturing processes, especially for the Bentayga, without chipping away the handcrafting bit found in every Bentley motor car. But the new technology brings more efficiency to some tried and tested methods. Out of the many tasks performed inside Bentley’s plant, the most spectacular, minute and painstaking job is getting the wood cabin trim right. Every piece of veneer starts as an aluminum casting bonded by glue with tulipwood, a type of wood that’s very workable and can withstand heat very well. Then on top of that sits the final layer, the high-quality decorative veneer that’s pressed under a certain temperature and pressure.

Each car is allocated 24 sheets of veneer: 17 will actually adorn the cabin while the remaining seven are used in case of damage.

The veneer is carefully sanded by hand until it has what Bentley calls “a good key” which then goes to a machine that covers it with five layers of polyester lacquer - one layer goes in every 20 minutes. Then, for four hours, the wood is cured, or heated, simply put. When that’s over, it undergoes polishing. Then, Bentley’s hawk-eyed wood specialists inspect it for what they call “blooming,” which is a cloudy effect that remains after the moppers have polished the wood.

Any sign of blooming is then marked with a white pen and flattened away. This happens for every single piece, until that bright mirror shine is revealed.

As I try to limit the steps I take on the NASA-secret-lab-grade cleanliness of the floor (yes, you can have your English breakfast on it without having to worry about Helicobacter pylori), we’re being taken to the veneer storage room. Which Bentley calls The Treasury. Of course it does. 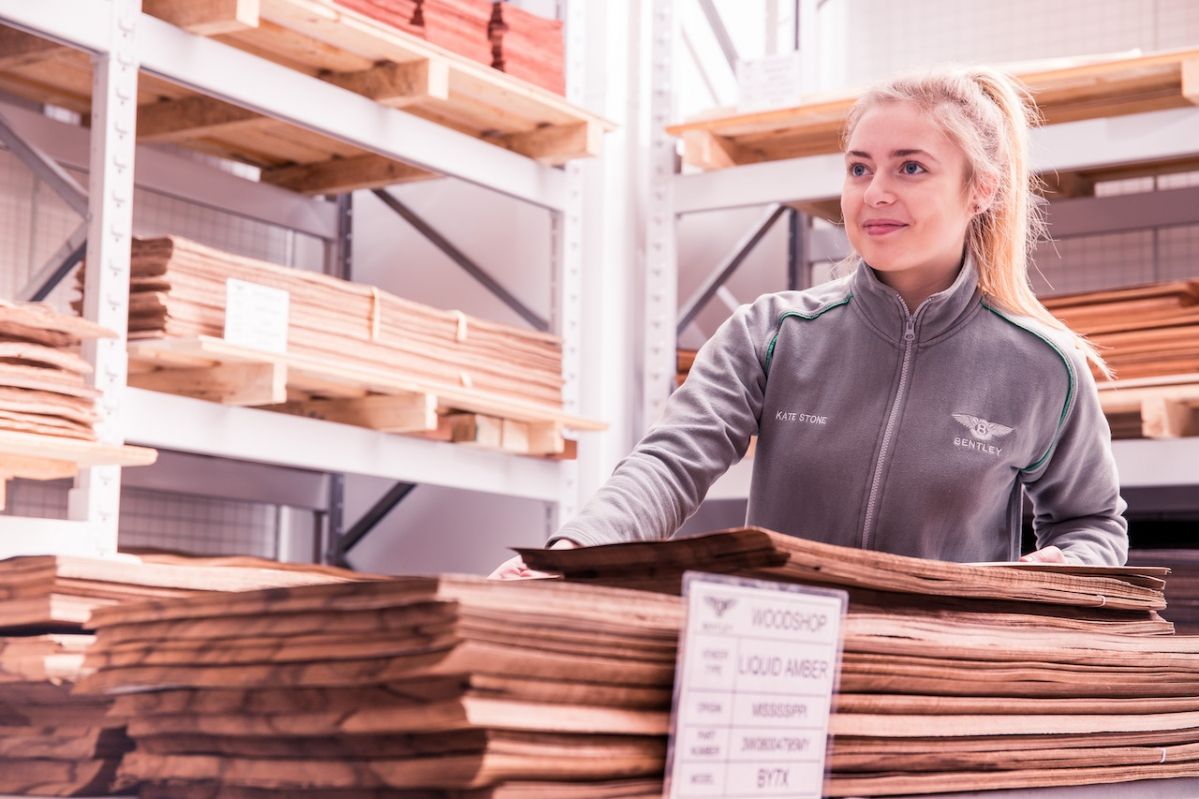 The first thing that excites the senses is smell. You can’t really see the veneer sitting in stacks and touching it is out of the question. But the smell, the smell is compelling and varies from one stack to the other, depending on the wood type. Yes, your nose will know the difference instantly.

The Treasury hosts 250,000 lb worth of veneer when the racks are full to the top. The wood stays here for three weeks and Bentley then needs 15 more days to handcraft its veneers, which amounts to five weeks in total, on an average, for each model. 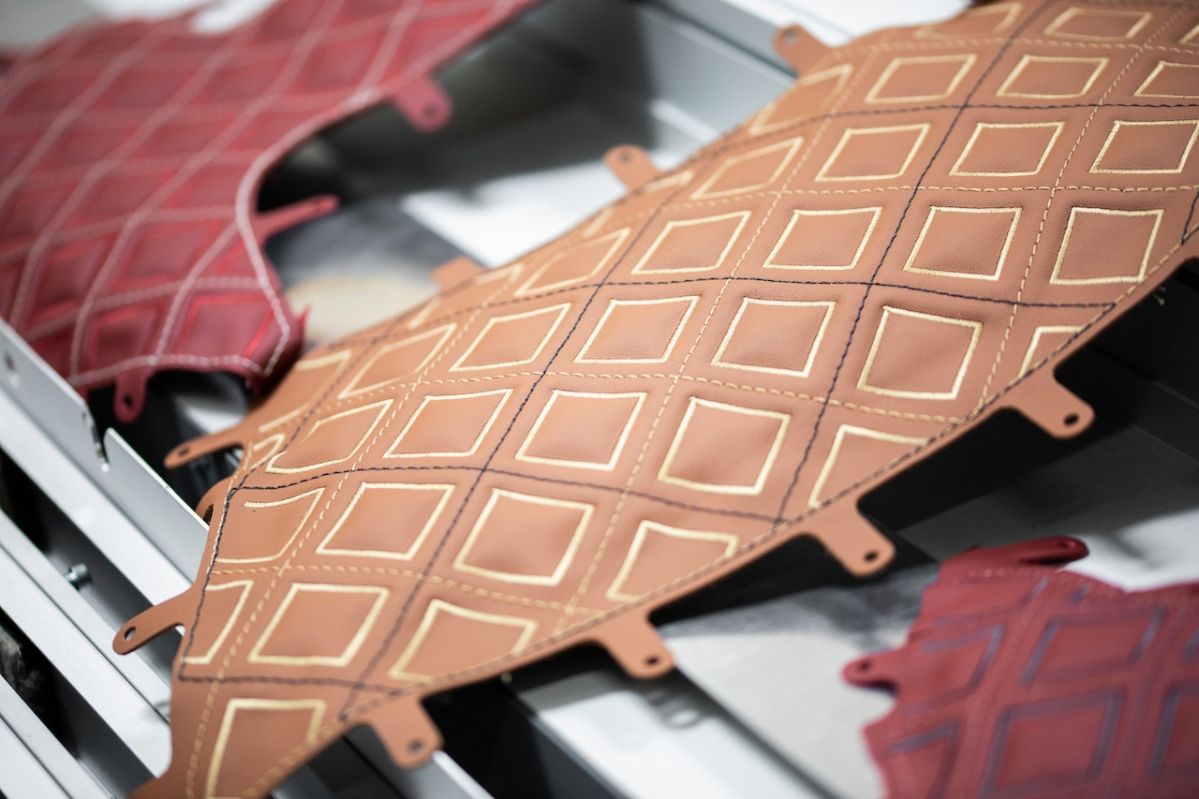 Every square inch of leather used inside a Bentley is bull hive. Why? Bentley says cow hide is too stretchy, so it’s always bull. The animals come from Scandinavia and Southern Germany, where they graze the pastures at high altitude, because the weather is colder, which means less insect bites. Also, the animals are kept in closures with no barbed wire, so they don’t scratch themselves.

To crunch some numbers, it takes nine to 10 hides to fully upholster a Bentley Continental GT, 13-14 hides for the Bentayga and Flying Spur and at least 16-17 for the standard-wheelbase Mulsanne. So just when I though the olfactory experience was over, we’re off to the leather workshop, where they check the hides for flaws and cut what will later spoil the backs of wealthy customers around the world. Here, we get more insights on the leather selection process:

“The best pieces are found at either side of the spine, so the belly of the animal. The hide on the animal’s neck can also be used, because the grain is OK, for edging the carpets or carpet binding or where the leather is not seen. But we need the best bits for the headlining and the seats.”

Speaking of customers, Bentley prides itself with the strange requests it receives in terms of personalization.

One eccentric buyer, for example, asked for hot-rod flames down the sides of his white Bentley. Bentley refused. However, he bought the car anyway and put his hot-rod flames, but Bentley said no because they didn’t “quite felt it was right for the car.”

“We have to be very careful because the brand is a very sensitive thing, so it’s important that people recognize we are a traditional brand, a racing brand, a driver’s car, handcrafted. Every single Bentley has: luxury, power and practicality. Those are the key messages for years and years and years.”

The area where they complete the marriage between engine and transmission is by far the loudest section of the Crewe plant. Here, 36 bolts are used to join together the handcrafted W12 powerplant to its matching gearbox. It takes 30 people and a total time of 13.5 hours to just build one W12 unit. After assembly, there’s a four-minute cold test the engine must pass, together with a 22-minute hot test. Each and every powerplant must undergo and pass them. If faults are found (Bentley says 2% of the tested engines come back with fault, which are minor and fixable), the engine is rechecked, and the problem solved.

After the said tests comes the big one: once a week they pick a W12 engine for the quality test. So, what they do is rev it to the max, non-stop for eight hours, but never use it in a car, even if it passes the test with flying colors. Coming out of the plant as the guided tour ends leaves the gearhead inside me with a lot to process. Bentley’s operations in Crewe are a mix of technology that’s constantly improved, tradition, family and soul, above all. In a way, I am left thinking that to drive a Bentley is not about the act of spinning the steering wheel and pressing two pedals. Instead, it’s related to feeling what others built and felt before you, so that when the time comes, what you feel is the best one can build.

bentley bentley continental gt bentley betayga crewe
By continuing to browse the site, you are agreeing to our use of cookies. Read more.
I Agree