The second iteration of the Sports Utility Vehicle concept to land Sant’Agata Bolognese factory’s courtyard, Lamborghini Urus materialized an extended, six-year preparation process. We thought maybe it’s not ready to meet us. Now, seeing it, we believe it’s because we weren’t prepared to meet it. The SSUV (Super Sports Utility Vehicle) is not just a naming game for the sake of awareness. A Lamborghini doesn’t need ambiguous nudging coming from the marketing department. Urus really has all it needs to branch out in the automotive universe. And stop asking yourself if people really need this new SSUV thing: the answer to this question is right here, in the form of this corpulent Lamborghini. “So is it really practical?” or “How fast is it?” or “How does it drive?” - these are the questions we’ve tried to answer during our few-hour experience with the biggest, most spacious, and most docile Lambo ever created.

Looking at the Urus parked near a Huracán makes you heel somewhat weird. Looking at a Huracán while sitting next to the Urus is even stranger. Actually, looking at the world from behind the Urus’ high-off-the-ground steering wheel is not a scenario your brain can easily, or naturally render. That’s because, despite its dimensions and implicitly the cabin’s roominess, the Urus breathes performance. There are two matte-finish metallic paddle shifters mounted behind the perforated leather-covered steering wheel. They look like plastic; yet by touching them, you realize they’re firm, robust, sturdy — just like the gearbox they collaborate with.

Just under the huge touchscreen taking the most of the center console lies a red flap, with controls that resemble an airplane’s thrust lever. Under the red flap you find the ignition button, and the aforementioned thrust levers are actually the drive mode controls. They’ve been oversized on purpose — a live reminder of this car’s performance-oriented DNA. Through the scaling and design found in Urus’ cabin, Lamborghini designers managed to create a successful mix of pretentious and efficient. The “pretentious” is here represented not just by the center console’s touchscreen but also by the one acting as the instrument cluster. Or the car’s light controls: a series of signs engraved on a piece of glass.

The seats are, more than anything, a hint at the Sant’Agata’s SSUV’s polyvalent nature. They promise both side support (for when the centrifugal forces become aggressive), and comfort; plus, you can spec them with heating, ventilation and even a massage function. 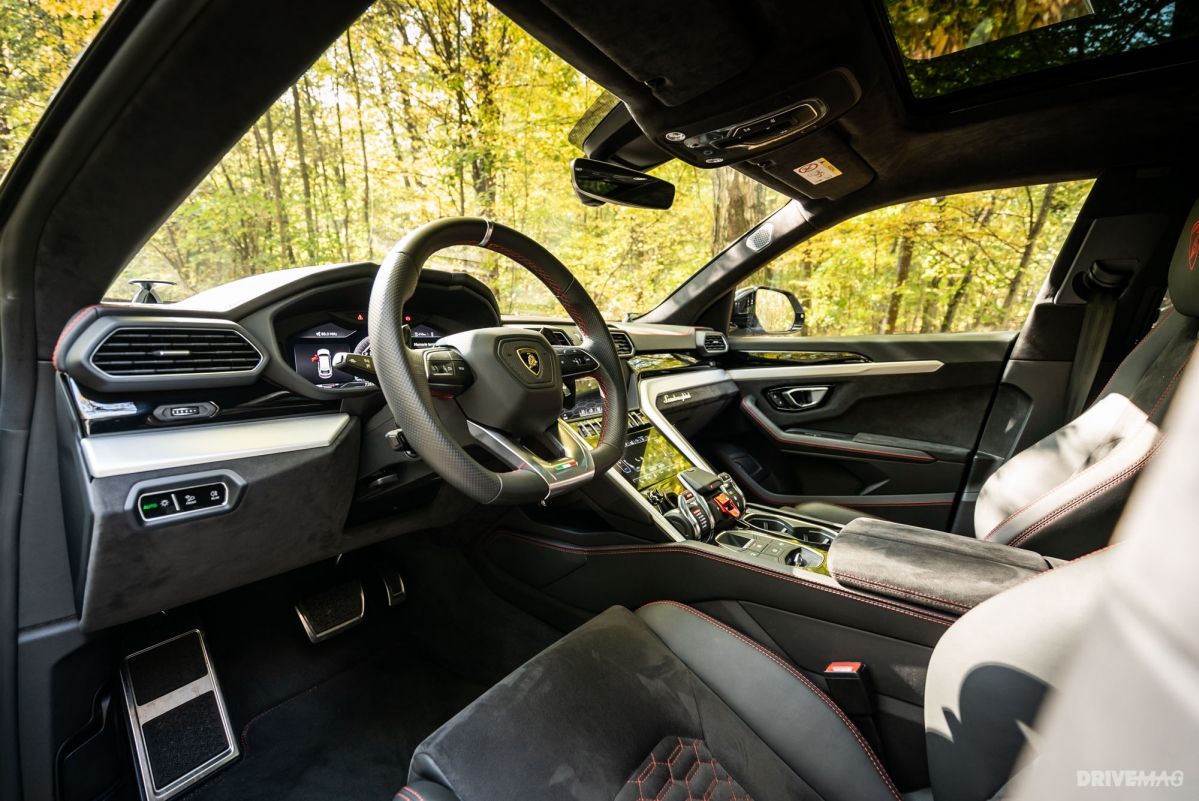 Speaking of seats, Urus has the biggest number ever recorded in a Lamborghini: five. Not even the chunky LM002 could boast as many, having individual seating for the rear passengers. You can configure the Urus as a four-seater as well, although by doing that you lose some of the boot space. Right! Boot space! 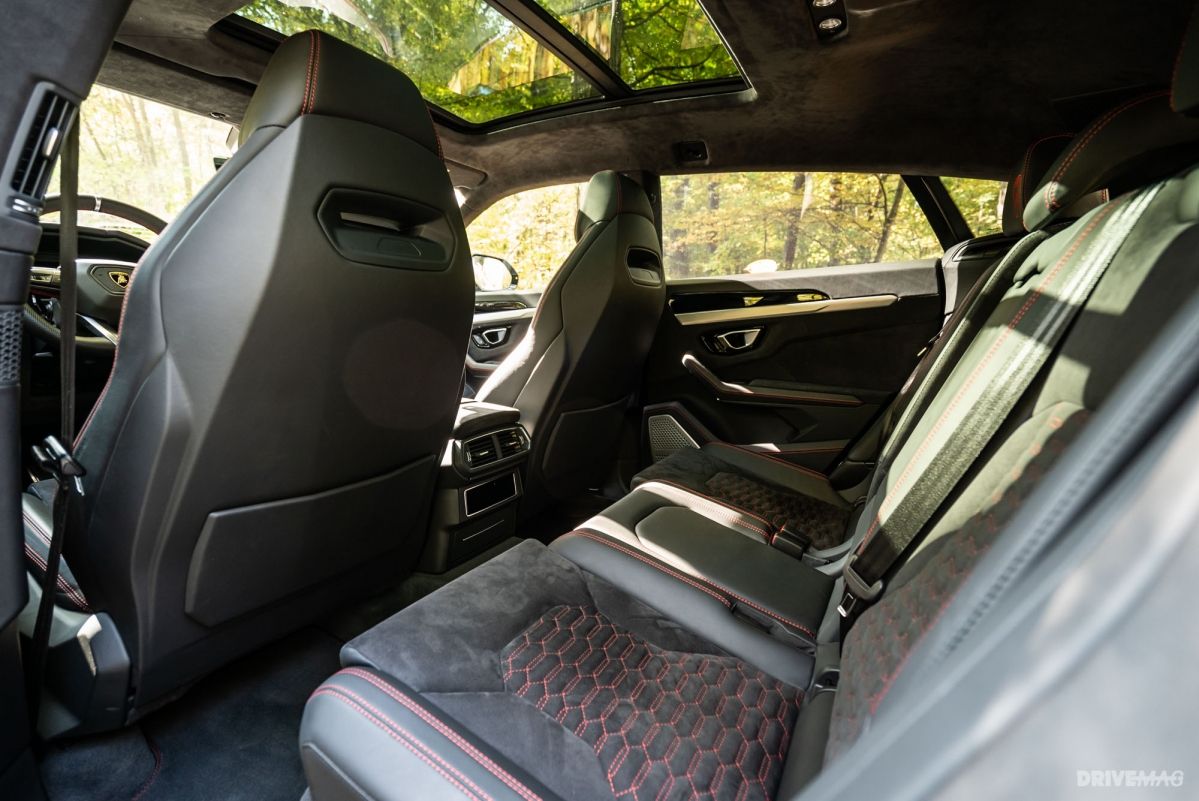 Urus does have one of those, and not just as an item with broad-sense names. Urus’ cargo space is of 616 liters (574 liters when the four-seat configuration is chosen).

Moreover, you can open the tailgate without even touching it — gliding your foot under the rear bumper is enough. Once opened, you can lower the car’s rear end by 40 millimeters just by touching one button. All of these have been seen in an SUV before but none of them in a Lambo. So is the Urus really practical? Yes, yes it is. And now it’s time to remember that Urus is a Lamborghini, so both practical and overwhelmingly fast. There’s a 4.0-liter twin-turbo V8 unit breathing under the bonnet, churning out 641 hp (478 kW) and 627 lb-ft (850 Nm) of torque available from 2,250 rpm. For putting the massive power down, the V8 leans on an eight-speed automatic ‘box and 325-mm wide rubbers (on the rear wheels; the front ones are a mere 285 mm). 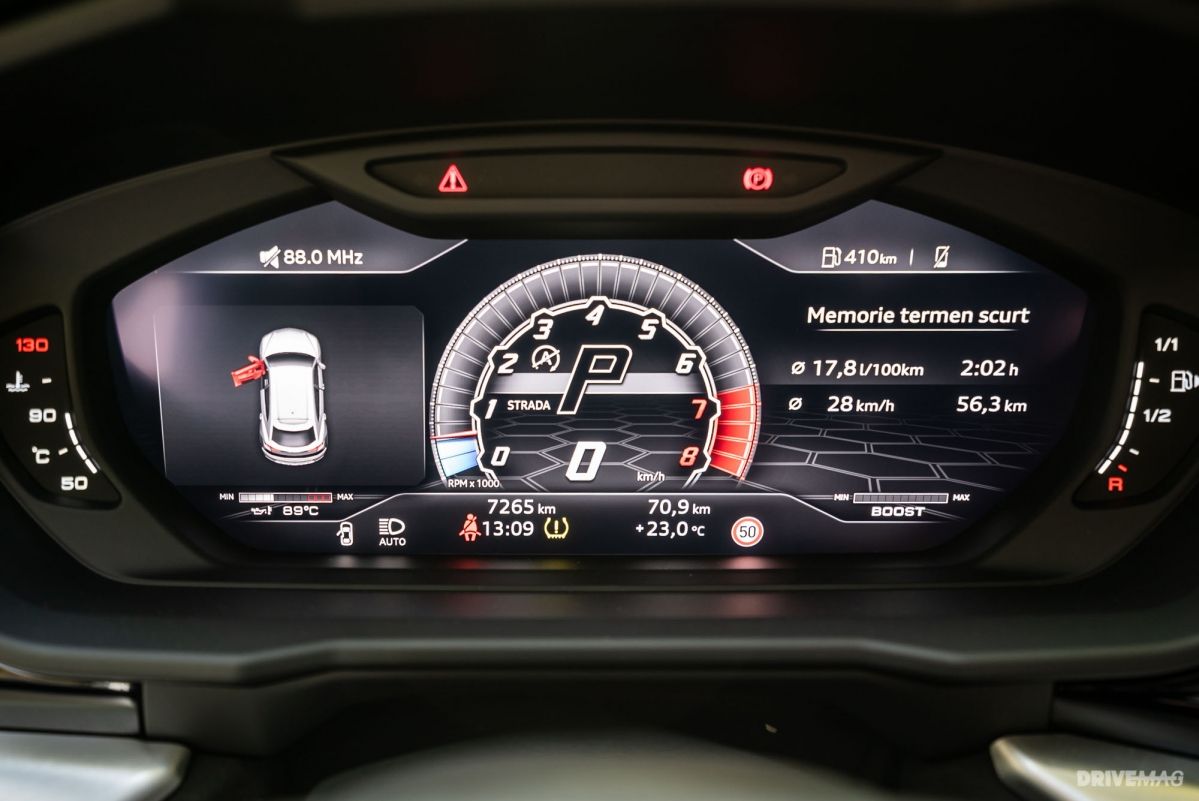 Urus launches itself to 62 mph (100 km/h) in just 3.6 seconds. Quick enough to not let you recover after the kick in the back that is the first-to-second gear change. You reach 124 mph (200 km/h) after 12.8 seconds. Not even at this point is Urus pacifying its sprint towards the 190 mph (305 km/h) mark. I’d say the acceleration is unreal but that’s a word that describes best this SSUV’s cornering. 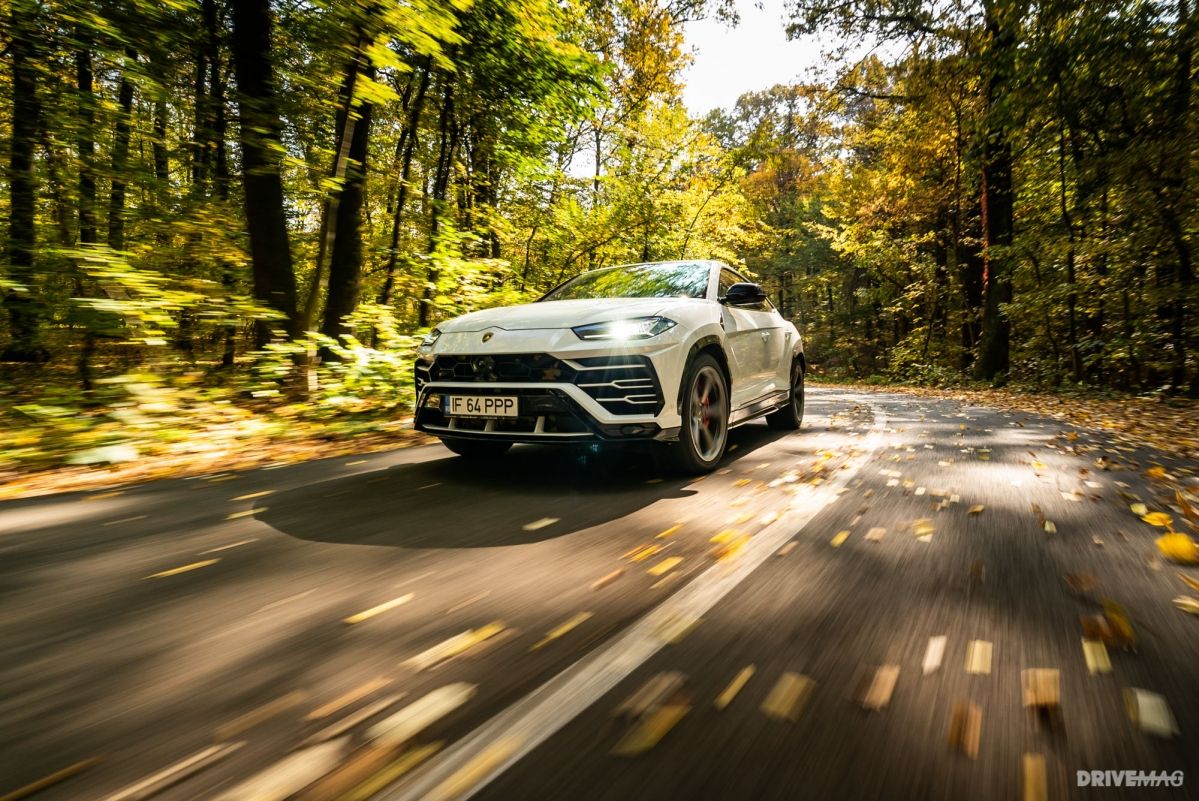 The all-wheel-drive system sends 40% of the power to the front, and the rest to the rear. If the situation requires it, as much as 85% of available torque is sent towards the front wheels. Again, under extreme circumstances, the full 850 Nm of torque goes to the rear. These parameters, along with the ground clearance and the damping are the things the ANIMA (Adaptive Network Intelligent MAnagement) drive mode system plays with.

Through ANIMA you have six different drive modes. In Strada, Urus is relaxed, keeping the V8’s voice, the transmission’s reaction and the damping as smooth as possible. Switch to Sport and you’ll hear the engine stepping up its voice a bit while the groud clearance drops by 15 milimeters. Corsa comes with yet another jump up in the tachometer, and almost all of the electronic nannies are put to sleep, the power management depends mostly on your reactions here. Neve (Italian for “snow”) puts the engine in low revs and all the electronics en garde, for achieving as little wheel spin as possible. Optionally, you can enhance the ANIMA with two more presets, Terra and Sabbia. As their name suggests, these two will come in handy when on gravel, or sand; while any of the two modes are engaged, the self-leveraging air suspension will go up by 40 mm from the standard 209-mm ground clearance.

Urus delivers not only fulminating acceleration but also painfully efficient deceleration, thanks to the biggest brakes ever seen on a road car. The front carbon-ceramic brakes measure 440 milimeters in diameter; the rear ones, 370 milimeters. From 62 mph (100 km/h) to a complete stop it needs as little as 33.7 meters. Urus is 5.1-meter long. But the SSUV’s ultimate trump card is the electromechanical active roll stabilization system — the VW Group’s technological wonder first seen on the Audi SQ7. It fights the car’s rolling movement so efficiently that it virtually drops the SUV’s (otherwise high) center of gravity. This makes Urus move its 2.2-ton body with impressive agility. You actually forget you’re in an SUV. I did, right before becoming afraid of this thought.

Lamborghini Urus comes with a €200,000 price tag, give or take. This gets you the most practical Lamborghini, or the fiercest SUV on the market. Either way, it’s a win. The standard equipment list is, as expected, pretty generous, with LED lights, 22-inch wheels, leather upholstery, Alcantara trim, aluminium/carbon fiber ornaments, they’re all there. On the optional features list you’ll find the individual seating (which comes with heated power seats at the rear as well). The Rear Seat Entertainment pack puts screens on the back of the front seats; you know, for the kids, because you have plenty of room for them now. For when you want to cover their loud voices, there’s a 21-speaker Bang & Olufsen audio system you can trust. The gesture-operated tailgate, the night vision camera, and the Highway and Urban Road Assistants are also to be found on the optional equipment list. So start ticking boxes and you’ll end up with a €250,000 family SUV; reaching the quarter-million is the easiest challenges for Urus. Even so, it’s far from the most expensive Lamborghini money can buy. But it’s by far the most spacious and comfortable model in Sant’Agata’s portfolio. A practical poster car? This seems to be the new trend. 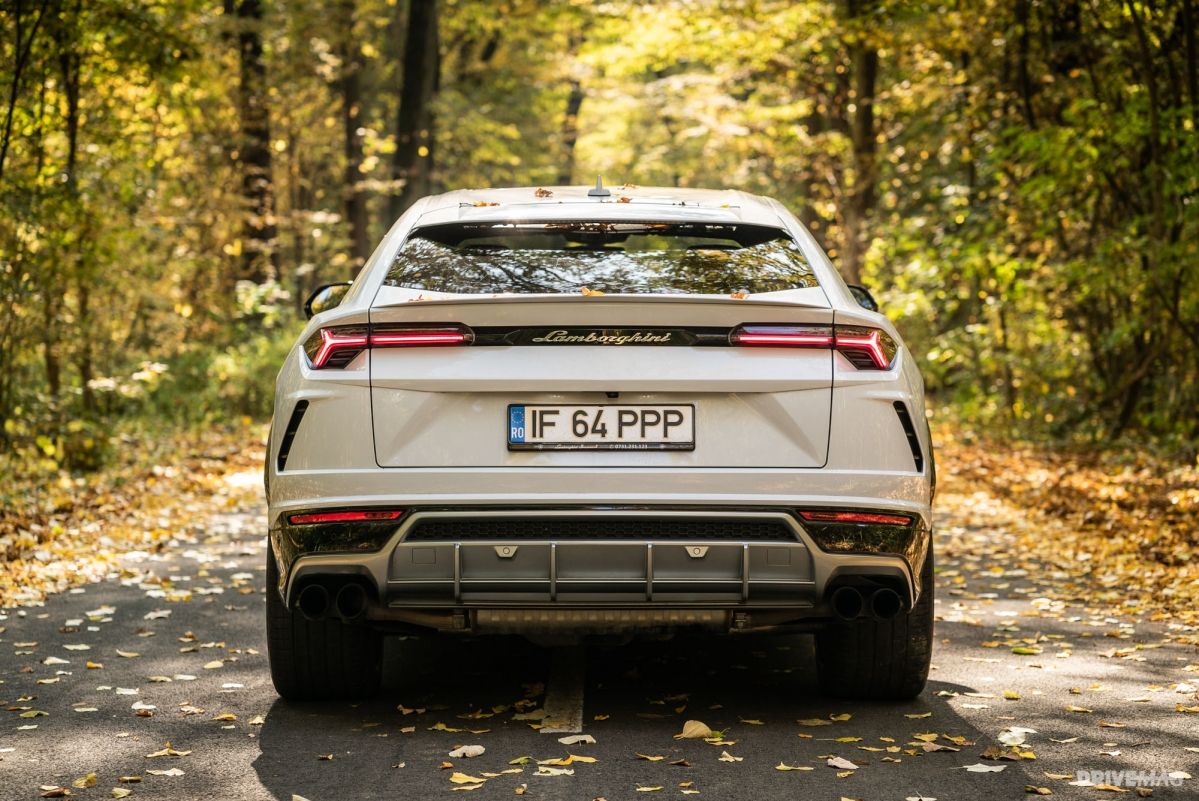 You can love it or you can hate it, but there’s something you must give to Urus no matter what you feel about it: respect. Its importance to the Italian brand’s evolution is irrefutable: Lamborghini estimates the company will double its sales (from approximately 3,500 units per year to 7,000 cars sold every year) thanks to the Urus. Judging by the already paid deposits, this calculation might be wrong.

Lamborghini test drive urus
By continuing to browse the site, you are agreeing to our use of cookies. Read more.
I Agree