16 years after its last iteration, V-Rally makes a comeback. Fortunately, it kept its spirit alive

Reading Amer Ajami’s V-Rally 3 review on Gamespot, dated Nov. 5, 2002, I cannot but confirm the fact that the brand-new V-Rally 4 is a chip off the old block in more aspects. In those where it isn’t, V-Rally 4 tries to be better, or different in a more pleasant manner. And although this doesn’t necessarily mean something for the majority, it’s a relevant, satisfactory aspect for the nostalgics.

Sixteen years have passed between this title’s episodes; sixteen years where great things have happened in the racing game universe. Graphics got better, simulations got more punishing (see the Project CARS games), and the arcades, way more exaggerated, like when you’re trying to tail a semi with your Mustang at 120 mph in Need For Speed Payback. And the friction between these two worlds spawned a new genre: the simcade.

That’s what V-Rally is: a racing game where you’re able to tweak your car’s parameters without being punished for not doing it. In my hours-long sessions spent in V-Rally 4, I haven’t moved a single slider. I didn’t see it necessary, although, if I come to think of it now, that might have helped me tame the rallycross Alpine A310 sooner. In V-Rally 4, you’re solicited in five different types of competition: Rally, V-Rally Cross, Buggy, Hillclimb, and Extreme-Khana. I’ve started off with the V-Rally Cross, in an Alpine A310, one of my favorite French cars of all time. Ten minutes in and five restarts after, I’ve decided this game is not the kind you’re playing with your right trigger always pressed to the max.

The controls are neatly calibrated even from the start (although you can further tweak them in the options menu) and you’ll eventually find yourself dancing through corners just by pinching the brake trigger and feathering the throttle.

Turning the car by using the analog stick might seem a bit problematic at times, especially when you’re jumping your buggy off ramps in Kenyan scenery. I mean, jumping is easy; finding the right turning angle upon landing is the tricky part. Reaching that finesse is not impossible, it only requires a bit of patience and, of course, practice. With a steering-wheel-and-pedals setup, V-Rally 4 reminds me of old arcade machines, and I mean this in the most endearing way. The vehicles’ physics are not as pretentious as in a full-on sim racer, they are rendered in just the right amount to keep you interested. Behind the wheel, I find V-Rally 4 as one of the most rewarding, laid-back racing games I’ve played lately. My joy behind the wheel was interrupted at times by a pop-up message that asked me to reconnect the controller. The quickest solution is to set the DualShock to never turn off automatically if idle. Mostlikely this bug will be solved with the next patch.

The vehicle selection in the V-Rally 4 is satisfying for the car-loving gamer, with competition-spec cars spreading over many decades, from the original Mini Cooper S of the ‘60s to the modern Ford Focus RS RX. The number of offers, however, may be seen as insufficient by modern standards: only 51 cars are available at the debut. Here’s hoping for subsequent content in this area.

Unlike before, V-Rally 4 has a more libertine approach when it comes to your in-game progress. After you’re introduced to the game’s features through some rally cross races, you’re pretty much free to choose whichever discipline you want, assuming you own the right vehicle for the competition. Plus, once engaged in a discipline, you’re not restricted by year-long contracts. This seems great, once you’ve learned the way this game unfolds. And now, let’s do a brief explaining of the V-Rally 4 career mode. In the Activity Hub screen, you see all the available events at a given moment, scattered across the world map. Regardless of the discipline, each event has an entry fee and a duration. By entering the event, you’re implicitly skipping the said number of days. This becomes relevant once you find out you have to pay for your employees (engineers, mechanics, agent) in weekly increments.

So, for example, if you’re entering a three-day event and, after that, a four-day event, you have to make sure these two events are paying well enough to keep your team happy. Luckily, there are enough race offers, and they’re paid generously as well. All you have to do is finish the race on the podium, preferably at the top of it. This day-skipping mechanism is also relevant when it comes to upgrading your cars. The Garage has three features: Upgrade, Customize, and Technical Sheet. In the Upgrade screen, you’re shown various areas where you can enhance your car (engine, chassis, gearbox, etc.) and the number of days required for that upgrade to unlock. So the more you drive a car, the more it becomes available for upgrades.

Customizing your car is far different from what you’ve been used to recently (NFS Payback, GT Sport, The Crew 2) and not necessarily in a good way. The tools for customization seem to have been made available only because ‘the others also have it.’ It’s not impossible to make art on your car, it’s only very disheartening at the beginning. I didn’t have the curiosity, or the patience to further explore this feature. Gameplay-wise, sticking with one car is a money-efficient way of progressing through the game, although winning a three-star championship with you initial Beetle buggy might prove challenging. Luckily, this doesn’t automatically mean you need a more expensive car; just dial down the AI Level at the beginning of the race. But mind you, this will come with a decrease in payment.

You can also win money — big money, even — via multiplayer events or races. In the V-Rally Mode (career mode) the multiplayer component consists of online time-trial events. Depending on your position in the standings (once the event is finished), you've rewarded money. In the Multiplayer tab found in the Main Menu, you’ll be able to rub shoulders with (and compete against) other human players via online live races or the good ol’ split screen. 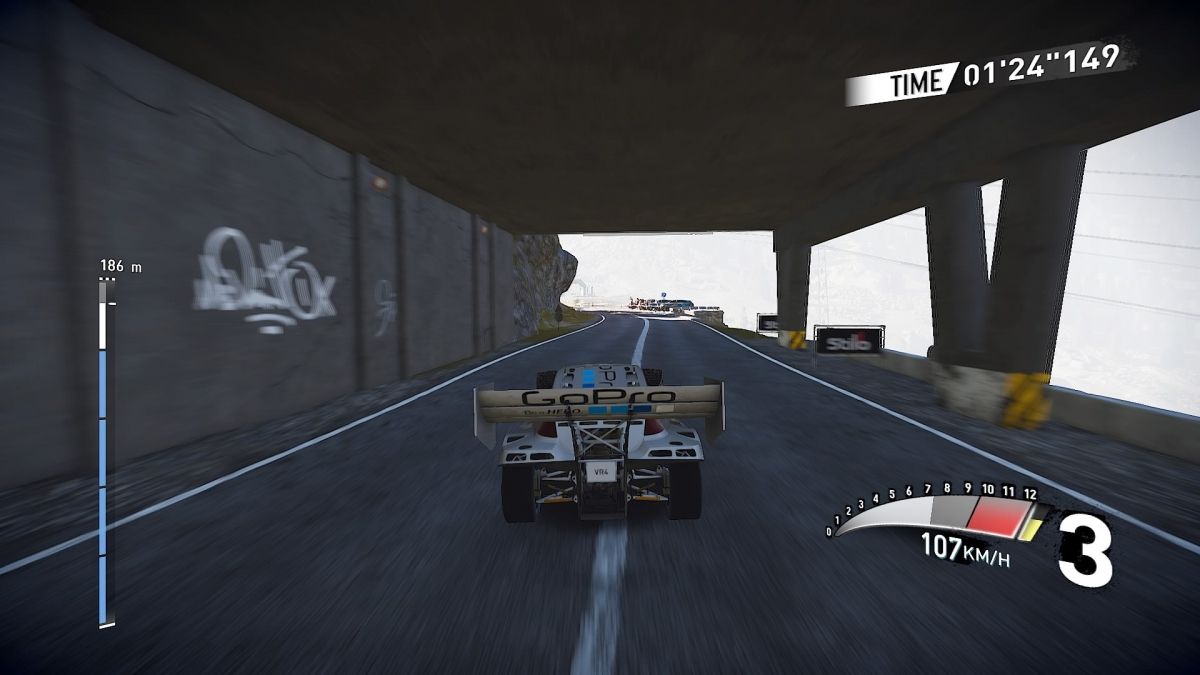 Regarding the graphics, I’ve postponed the topic for the end of the review, because it is still a bowl of mixed feelings for me. To put it bluntly, V-Rally 4 leaves to be desired in this area, at least on PlayStation 4. The textures seem shallow, and the cars renderings, crude. However, hop in your Hillclimb car for a Transfagarasan ride on a clear morning weather, and you’ll be tempted to raise your arm to shield your eyes from the sun rays, just like Ari Vatanen did in his famous climb dance. And that’s a ‘feel good’ moment V-Rally guarantees for through its clean, simple looks and neat gameplay.

game review racing games v-rally 4
By continuing to browse the site, you are agreeing to our use of cookies. Read more.
I Agree