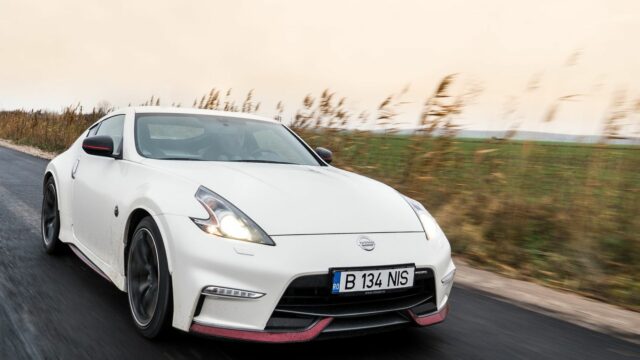 The Nissan 370Z Nismo might be an old and rare bird, yet it still has a lot to offer for purists and aficionados

If we are to ignore Nissan’s PR voice, the one that claims the upgraded 370Z Nismo is the sportiest and most focused 370Z Nismo they ever built, we would still be haunted by the set of changes brought to a package that was previously labelled as too hardcore and adamant. So what changed for the new 370Z Nismo? Here’s what we found out.

Under the hood, the Nismo crew kept the same 3.7-liter V6 engine as found in the regular 370Z but engineers came up with their own finishing touches and turned the unit into a bipolar apparatus. Of course, being as two-faced as Dr Jekyll and Mr Hyde is not a bad thing, although this behaviour can catch you off guard from an acoustic point of view.

Let me detail. Keep the rpm needle under the 3,000 marker and the engine’s soundtrack proves well-behaved. Go beyond that, and you’re in for a loud date with the engine’s 344 horsepower and 371 Nm (276 lb-ft) of torque, minus the roar you’d expect from the V6. Instead, the six-cylinder brute will hiss, whistle and fizzle like a cornered feline.

There’s a different engine tune for every gear and once you discover that, you’ll get over the fact that the gearbox-clutch duo begs for a high dose of manhandling. Yes, pushing the Nissan 370Z Nismo to the limit will reward you with a free cardio workout and you can blame that on the manual six-speed transmission. Yet again, a stick is the best thing to have on the Nismo, so our complaints stop here.

Luckily, Nismo’s SynchroRev Match (aka S-Mode) gizmo will make you feel like a pro driver as it monitors the clutch pedal, shift lever and vehicle speed and artificially blips the throttle to the ideal rpm whenever a downshift is performed. Speaking of which, the 370Z Nismo only needs 5.2 seconds to display its mad acceleration skills from 0 to 60 mph (100 km/h).

The Zed’s steering puts the hard in hardcore especially at low speeds, even though it does not transmit as much feedback as one would like. There’s good grip on the road as long as you ride on dry asphalt.

Throw some rain in the mix and the car’s rear end will tend to go astray at times while the electronics will work hard to correct that. There’s also the stiff suspension, way too firm to consider the Nissan 370Z Nismo a daily driver, but a reassuring asset on the kind of car that will bite back whenever it has the chance.

Tight bends negotiated in a sporty fashion are not 370Z Nismo’s speciality. This is when you start to feel the weight of the car and its rather acute style of travelling on tarmac, completely opposed to the smooth, scalpel-like ways of the Porsche Cayman, for example. Other than that, the ventilated brake discs are on par with the car’s demands and do a good job in stopping or decelerating all its 1,500 kilos (3,307 lbs).

However, the Zed’s true colors surface when the car is driven on speed-friendly flowing roads. In this environment, the V6 can freely climb the revs ladder as it pleases while both the steering and suspension systems show signs of taming. Nonetheless, that won’t stop your wrist watch or coins scattered in your pocket from shaking due to the vibrations sent in via the car’s controls.

Despite the fact that the Nissan 370Z Nismo hasn’t gone through the rigours of Euro NCAP and IIHS testing, the coupe is fitted with ABS, electronic force distribution (EBD), six side and curtain airbags plus LED daytime running lights and active head restraints.

All in all, you’ll feel safe inside the Nissan 370Z Nismo as long as you don’t push your car to its limits without knowing what you’re doing behind the wheel.

They say every rose has its thorn and the 370Z Nismo fits right in. Upon entering the 370Z Nismo, leave every expectation towards comfort whatsoever at the door sills, because you won’t have any in this car. A pair of Recaro seats makes sure you’ll feel every bump in the road like a vaccine shot; plus, the 19-inch Rays alloy wheels won’t help your cause.

But it would be unfair to judge the bucket seats by their ability to spoil you, when in reality they were built for supreme lateral support and a racy position, as close to the ground as possible. This, combined with the nature of the car, means visibility is very restricted if you choose to look in any direction other than forward.

Also, the steering column doesn’t offer telescoping adjustment, which might be problematic for taller individuals. But then again, the steering wheel welcomes your hands with a saucy mix of Alcantara and leather, the same treatment applied for the seats. In addition, Nissan’s engineers changed the carpets and the inner rear wheel arch protectors to reduce road noise. Also, that’s as far as Nismo’s orientation towards comfort will go, as most of us will feel that getting in and out of the car requires some effort.

Build quality is satisfactory, especially since the car’s nature calls for a tight-bolted, sturdy build. Apart from the steering-wheel and seats, the cockpit offered by the Nissan 370Z can be described as average quality.

Plastics are decent both from a visual and a tactile standpoint, but the hardest thing to shake off is the outdated cabin, which betrays the fact that the Z-car is approaching its retirement.

Don’t expect the 370Z Nismo to excel in this department, as it relies on cutaway areas in the upper seatbacks and lower seat cushions, along with three cup holders (on in each door and one on the center column) and a small glove compartment. Boot space stands at 235 liters, a rather shy value but acceptable for this kind of car.

The cabin’s spartan flavour is also reflected in the tech side, where the Nissan 370Z Nismo’s main ace up the sleeve is the eight-speaker Bose audio system. In addition, there’s the Connect Premium system with rearview camera, sat-nav and iPod connectivity.

Again, not something the 370Z Nismo can be proud of. But again, you really don’t care at all about this aspect once you’ve decided to buy the car. Nissan tells us the Zed will drink 10.6 l/100 km (the equivalent of 22.2 mpg) in the combined cycle, but in reality, fuel consumption goes as high as 15 l/100 km and that’s the price one pays for all those emotions served by the 370Z Nismo. Nonetheless, CO2 emissions are inevitably and understandably high at 248 g/km.

Besides the standard amenities offered by the regular 370Z (rains sensing wipers, intelligent key, automatic headlamps and power windows, ABS, EBD, brake assist and a limited slip differential), the Nismo-imbued variant adds mostly visual goodies. There’s the conspicuous Nismo aero body kit, the Nismo dual exhaust, Nismo spoiler and the suite of logos and badges positioned on the outside and inside.

Speaking of the cabin, the Recaro seats are a feature available only for the 370Z Nismo, just like the racing leather/Alcantara steering wheel and the red interior stitching.

All in all, there’s a simple conclusion to draw on the Nissan 370Z Nismo: this is not a daily driver and it only works best if it shares your garage with a regular car, more oriented towards everyday traffic duties and whatnot. Couple that with the hefty price tag the 370Z Nismo is wearing ($41,990 in the US excluding destination tax and €46,350 in Germany) and you get an expensive package at first sight.

Far from being practical or comfortable, the Nissan 370Z Nismo’s strong side has a lot to do with trips outside the city, curvy roads and a high dose of tailfeather shaking every now and then.

Once you get behind the wheel with the right mindset and see what the car is offering for that sticker, you’ll quickly understand why they say that beauty is in the eye of the beholder.