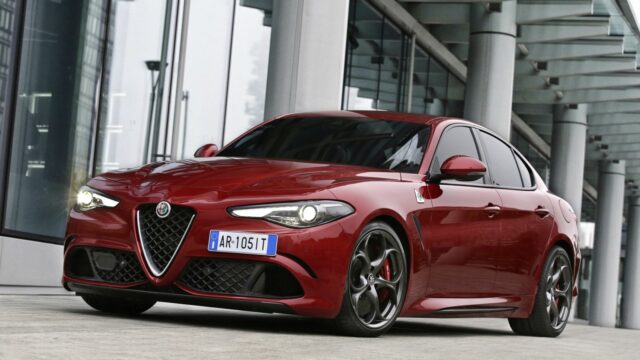 The biggest rival for BMW M3 is here.

Alfa Romeo is making a big and long awaited comeback on the global market. And it will do this with the help of the new Giulia. It’s the sedan that we’ve been waiting for almost four years. It’s finally here and we got a chance to drive it in Italy, on the proving grounds of Balocco, home of the FCA group. We got behind the wheel of the diesel powered Giulia, a version that will dominate the European market, but also we've sampled the M3-killer, the Alfa Romeo Giulia Quadrifoglio.

Alfa Romeo Giulia marks the rebirth of the Italian brand. The engineers wanted that everything is perfect so the powerful version hits the market alongside the more ‘common' diesel variations.
For creating a car that can compete with the acclaimed BMW M3, the Italians first turned to the engine. It had to be special, so they used the know-how of another brand: Ferrari. Officially, the 2.9-liter engine that we can find in the Alfa Giulia QV is produced by Alfa with Ferrari inspiration. In reality, it’s the engine used by the Ferrari 488 GTB, but with less cylinders. Instead of 8, Alfa makes do with a V6 at 90 degrees, 2.9-liter, twin-turbocharged that pumps out 505 hp and 443 lb between 2,500 and 5,500 rpm and can spin up to 7,000 rpm. It has an aluminum head and block, oversquare cylinders, a cross-plane crankshaft, direct fuel injection, and cylinder shutdown technology. The soundtrack is nice, no Ferrari high-pitch squeal, but a very nice burble and growl are played by the quad exhaust pipes. Top speed is an impressive 191 mph.
Power is sent to the rear wheels via a carbonfiber propshaft (available also for the normal gasoline and diesel Giulias), an eight-speed torque-converter automatic gearbox, and an active torque-vectoring rear drive module with electronically controlled clutches on either side of the differential. The alternative is a manual six-speed gearbox, and in the future there will be an all-wheel drive version. By the way, the new Giulia is the first rear-wheel drive Alfa in over 30 years. The last model that used the rear wheels for power was the Alfa Rome 75.

For challenging the M3, the Italians gave the best of their knowledge. The resulting chassis is fantastic and let me tell you why. Featuring double-wishbone front suspension and quite direct steering rack, the driver has a lot of feedback from the front wheels. Body control is very well judged. We drove the new Giulia QV on the perfect tarmac of the Balocco proving ground in Italy, but even we rode over the kerbs the suspension felt quiet and absorptive with minimum body roll.
When we up the pace, the quality of the chassis shows even more. The fast-acting rear diff ensures that the car remains neutral in the most of the corners. When the back steps out, countersteer has to be applied to bring the car back in line, but Giulia does all this extremely smooth. It is a real pleasure to play with the car in the corners, and Giulia forgives a lot from the driver. A BMW M3 is not as forgiving.

Alfa has kitted its new Giulia with all the safety equipment that today’s technology offers. It has yet to be tested by an independent organization like Euro NCAP or IIHS. It will be submitted probably by the end of the year, and we expected that will pass the crash test with flying colors. Also, the new Giulia features a full automatic stop feature in case of an imminent impact.

The top of the crop Giulia Quadrifoglio Verde (or Cloverleaf) is well kitted, and the two front seats are extremely good. The sports seats come from specialist Recaro, and they have excellent lateral support. Also the backs of the seats are covered in carbon fiber. We cannot reach a verdict for the suspension. It does feel firm on the perfect tarmac of the Balocco track, but we didn't get a chance to test it on normal roads.

Alfa has really tried to raise the bar on quality. It’s no Audi interior-wise, but it is quite close. For the QV there are a lot of carbon fiber and aluminum inserts. Also a lot of leather that covers the steering wheel and rolltop dashboard. But, there are also downsides. The switchgear feels quite cheap, and for the blinkers, Alfa has chosen those that cannot be canceled by nudging them in the same direction. Also, the seat belts aren’t height adjustable. There are still little things that can put the potential customers off.

Giulia is a medium-class sedan, so it has a quite practical side. Space is plentiful inside, but for the QV version, three persons on the rear bench is quite a squeeze. The boot is spacious with 480 liters in volume. Anyway, the Giulia QV isn't your typical daily cruiser, but there will be people that will drive this thing daily.

Alfa has a brand new infotainment system that centers around a non-touch display. A rotary dial on the center console is the only way you can control the infotainment system. Is sufficiently intuitive and the graphics are quite OK.

With a Ferrari engine in disguise under the hood, fuel efficiency is no priority. But, still, with stopping cylinder technology on hand, the Giulia QV reports decent consumption numbers. The combined cycle economy is 33.2 mpg.

The new Giulia is very well kitted. First of all, Alfa has fitted an upgraded version of the DNA system. Through this system, the driver can choose between four driving modes, instead of the usual three. Beside the Normal, Dynamic, and All Weather, the Giulia QV features a Race mode, which turns off most of the driver aids and the features are tuned for full-attack mode on track. For starting the engine, Alfa Giulia has a red starter button on the steering wheel, a feature common only on Ferrari models. Also, for the Giulia QV with an automatic box, manual gear shifts can be made using the large metal paddles from behind the steering wheel. Upshifts are smooth, down shifts bring a very satisfying clunk.
We also have a lot of useful gizmos like the carbon fiber active aero front splitter, LED day-light running lights, carbon fiber rear spoiler, and red calipers.

The car is already available in Europe in some countries, and will come to the States soon. In Europe, prices vary around €78,000 or £55,000.