Alfa's first SUV is born, its cuore sportivo being the epicenter of its creation. But is it good enough to make the rivals feel challenged?

Being the Italian carmaker’s first SUV, the Stelvio has been received with criticism, the fans being afraid that Alfa would comply to this blend, boring world of jacked up vehicles.

But it’s the multi-billion Giorgio platform — on which the Giulia, the Stelvio, and, by 2020, several more models will be as well underpinned as well — that settles this in a very convenient manner.

The Stelvio’s kinship with the Giulia is not reflected exclusively by its design but also its organs. But until you get to feel that, first you’ll see its harmonious lines defining a body found in that sweet spot where a slick hatchback and a bulky SUV intersect. And then there’s the front fascia and the rear, and then you realize that although it doesn’t look astonishing from any angle, there is no such thing as a bad angle either. I felt the need to personify the Stelvio just by looking at it, in the flesh, for the first time.

I entered the car, pushed the Ferrari-like ignition button on the steering wheel, then I started looking around for the parking sensors deactivation button; the ones in the front of the car just wouldn’t quit screaming at me for no apparent reason. As it turned out, sitting in the sun for too long has that effect not only on the humans but on the cars also.

The next several hundred kilometers behind the wheel thought me that character doesn’t have anything to do with perfection, and character is what we drivers desperately search for nowadays, as it became less and less present.

Now, let’s break down to its most, and least pleasant features. The one we’ve tested here is the 276 hp (280 PS) turbocharged four-pot, the most powerful option from the current engine line-up. Mated to an 8-speed ZF transmission, and having the Q4 all-wheel-drive system to take care of the traction, the Stelvio will pass the 62 mph (100 km/h) mark after 5.7 seconds, which is better than what most drivers would naturally ask for from an SUV.

The engine-transmission set-up is so well put together but will come short when it comes full-throttle sprints. Spread your fingers to grab the aluminum paddle shifts mounted behind the steering wheel, plant your foot on the throttle, listen to that beautiful rev build-up, and prepare for the subsequent grimace you usually have when the rev counter tops, abruptly cutting the car’s impetus.

The rev counter meets the redline at a mere 5,500 rpm — a disappointingly short fuse, even for a turbocharged petrol engine. But master the timing, and you’ll be rewarded not only with hiccup-free sprints but also with a kick in the back whenever you pull the “+” paddle. Just like the Giulia, the Stelvio uses a double wishbone setup in front, and a multi-link rear aluminum suspension and they’re both finely tuned. Naturally, the springs are longer but stiffer than in the Giulia; and, just like in the sedan, the steering is a peach. Go for the Dynamic Mode, because that’s where Stelvio is ready to stretch all of its muscles, and you won’t get enough of this car.

In our test drive, we climbed a narrow, beautiful Romanian mountain road, up to a plateau, and then we descend, just to climb it one more time; (actually, it was more than one up-down-up cycle). The body roll is at a minimum (for an SUV), and the seating position makes you feel like you’re in a hot hatch rather than an elevated Giulia. Furthermore, the drivetrain components’ symbiosis helps you feel so much in control. Of course, the universal physics laws don’t bend for the Stelvio, but all these make for a beautiful, rewarding flirt. 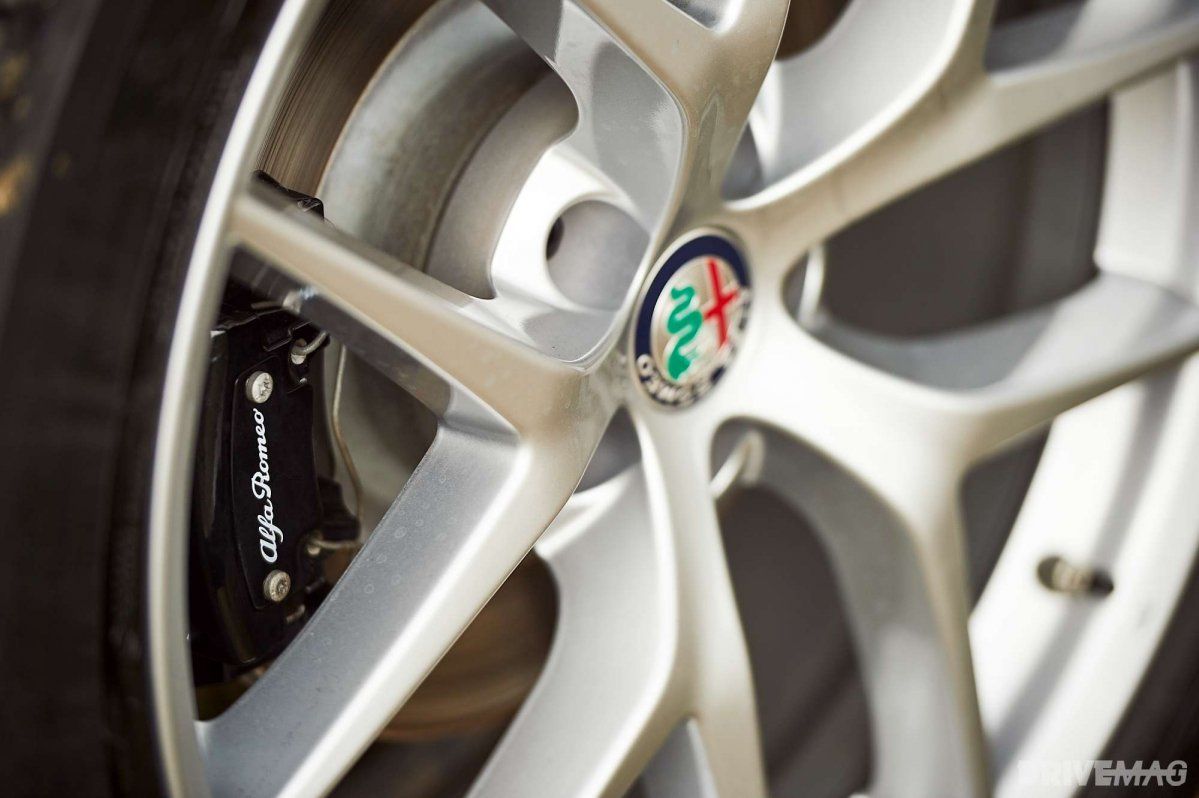 Stelvio was awarded a full five-star safety rating by the Euro NCAP, enough to convince everyone it can sustain a heavy hit.

And it’s not only how good can it cope with unfortunate situations but also how good is it at avoiding them. Our First Edition tester had all the safety features, from the standard electronic nannies to the adaptive cruise control. 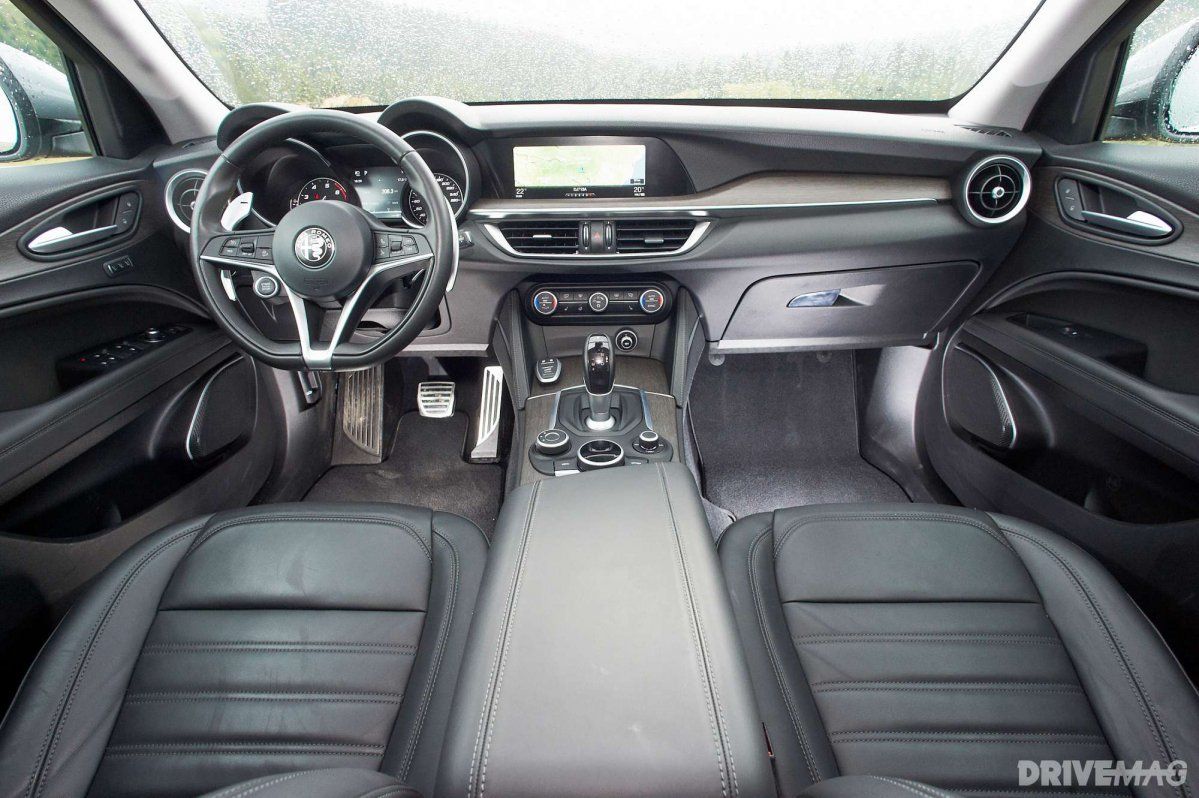 It’s stiff-ish. It couldn’t have been any different, at least without compromising all the good moments you have with this SUV. The suspension setup reduces the body roll and enhances Stelvio’s behavior in corners but, on the not-so-bride side, fails to hide all the road’s imperfections as others do better.

For what’s worth, our tester rode on 20-inch alloys, so the car was as rigid as it could be. You have to compromise its looks, by opting for smaller wheels, in order to calm down the Stelvio a bit. 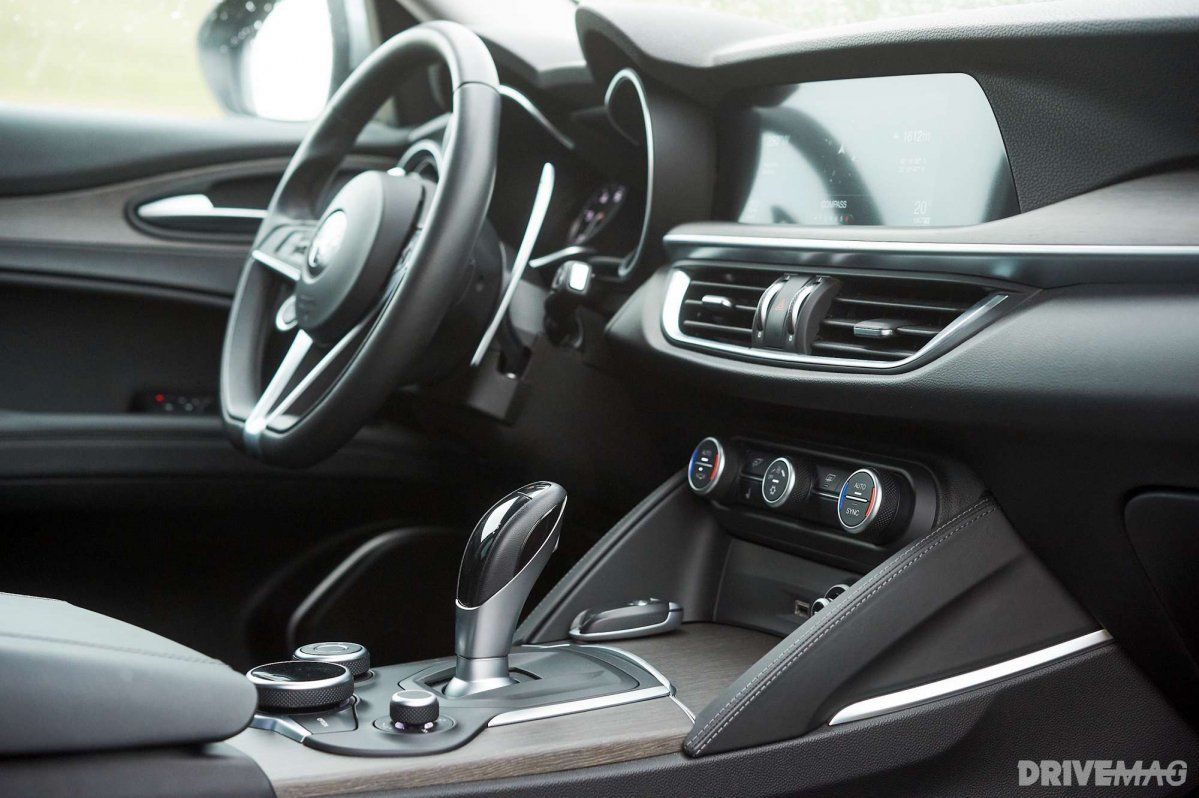 Targeting the likes of Jaguar F-Pace, Porsche Macan, and Audi Q5, the Italian interior designers made a great effort in getting the Stelvio on par with the ones mentioned above, and it paid off; well, at least most of it.

In its First Edition guise, the Stelvio is full of Pieno Fiore leather, wood, and aluminum inserts through the cabin but the general sense is of a neat build, even if you ignore these fine delights. One annoying detail was the gear lever, though: the silver bits are made of sharply cut plastics.

Actually, that whole area looks like it has been overlooked; the volume, and infotainment control knobs look sturdy but are a bit flimsy. But who needs music when you can listen to the turbocharged power plant through your speakers while in Dynamic mode? With 525 liters worth of boot space (which you can access through an electric tailgate that comes as standard), the Stelvio is 25 liters short of the BMW X3, Audi Q5 but a bit roomier than the Porsche Macan (500 liters).

The cabin has plenty of ample storage spaces that give you the chance of losing things in the car. 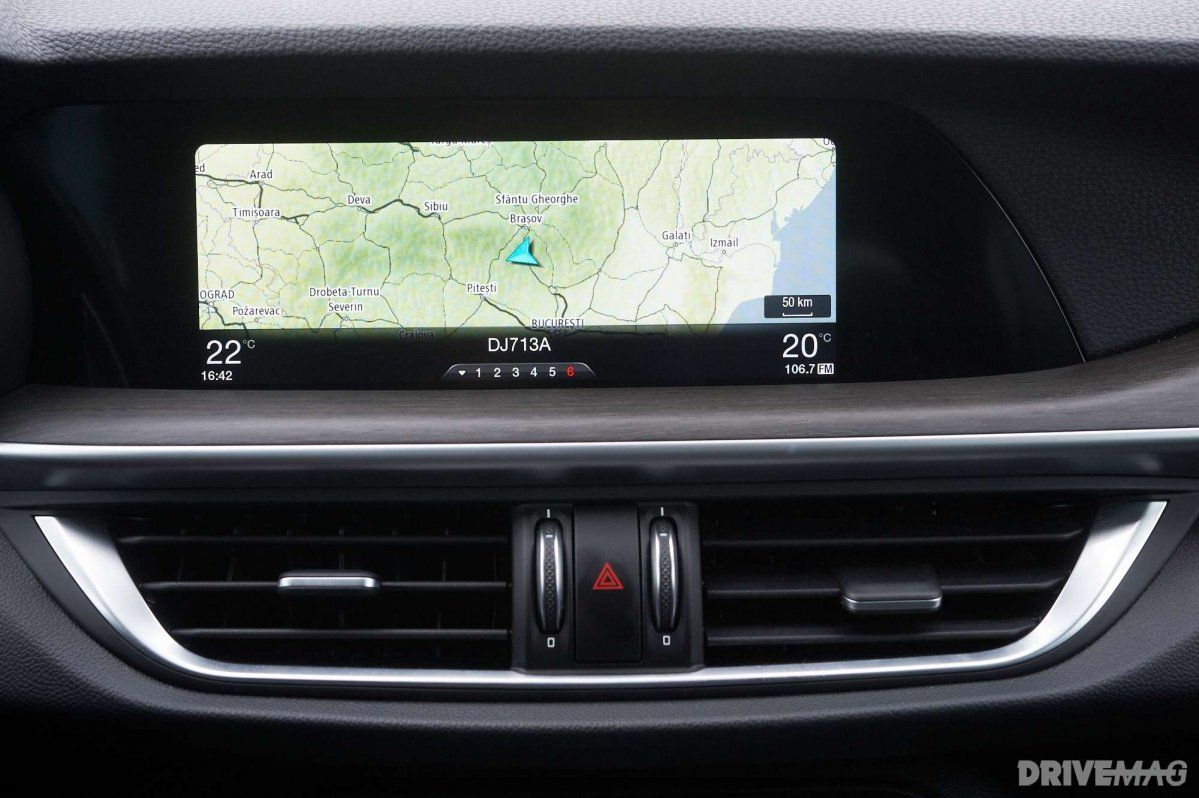 If you are sick and tired of the still-trending tablet-like screens, you’ll be delighted by how the Alfa is returning to the dashboard-embedded screens. The graphics on the 8.8-inch infotainment unit look good, the reaction times are relatively decent, and to operate it — through an MMI-like rotary controller — is pretty intuitive.

Alfa's conception of connectivity doesn't imply (yet) Android Auto or Apple Car Play, so Bluetooth and USB will have to do for now. It's the least you can have in a premium car and all you actually need in a car as entertaining (to drive) as the Stelvio. In the end, the several hundred-kilometer road trips — where, as you read above, implied long sessions of hard usage, and about 260 km of smooth cruising — the instrument cluster showed 12.5 l/100 km. However, the fuel gauge lightened in red with about a quarter of a tank of gas in it, and 180 km (112 miles) range.

So it might have been a problem with the fuel gauge or something. Either way, there’s something wrong with how the Stelvio perceives the idea of fuel consumption. 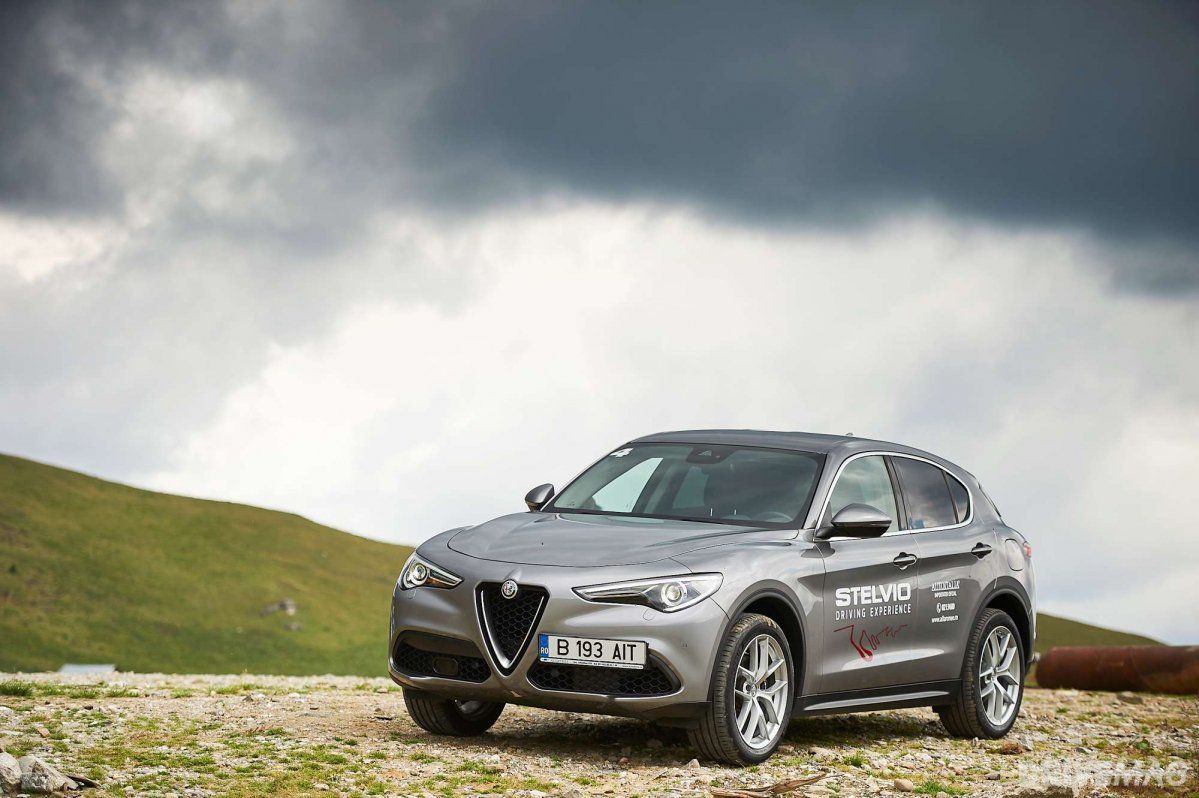 It is hard to remain unimpressed at what the Stelvio has in store for you, especially in the First Edition guise. Besides the posh, leather-and-wood interior, the launch special edition comes with 20-inch wheels, a 10-speaker sound system, front and rear parking sensors and a reversing camera (although it’s not the best we’ve ever seen, to be honest), all the electronic systems Alfa can offer, and much more.

Throw some extra €1,700 for the “Panorama” sliding roof, and you have a lively, good-looking, practical Italian all-rounder. All the Stelvio’s premium rivals have powerful, petrol-powered versions but none of them can promise you a better priced comprehensive package. Alfa’s aggressive pricing is, well, aggressive; this approach might help its SUV spring in every customer’s mind looking for a passionate all-rounder. The thing is, the Stelvio might not be the ruler of this segment, but it can make you lose your head like nothing else. Live a little, would you?