Jaguar's first foray into the crossover segment is a promising one

Sometimes it's better to be the last one arriving at a party. Food and drinks are already on the table, everyone is warmed up, music blasts through the speakers, and you can jump straight to having fun without going through that boring pre-party thing. While Jaguar bosses had other reasons to launch the automaker's first SUV so late after (almost) all other rival premium brands, the final product nevertheless benefitted from being benchmarked against the best models the segment has to offer.

It's no secret Jaguar engineers used the Porsche Macan as a standard when developing the F-Pace dynamic ability. After all, the British brand proudly calls the F-Pace a "performance crossover." We wanted to find out how much of this holds true for the F-Pace when it's fitted with the engine most people will buy – both in North America and in Europe. That's the base 2.0-liter Ingenium turbodiesel unit that delivers 180 hp and 318 lb-ft (430 Nm) of torque. No one expects breathtaking performance from an 180 hp crossover that weighs 1,775 kg (3,913 lbs), but the F-Pace 20d AWD holds plenty of good cards under its beautifully sculpted bodywork. Read on. 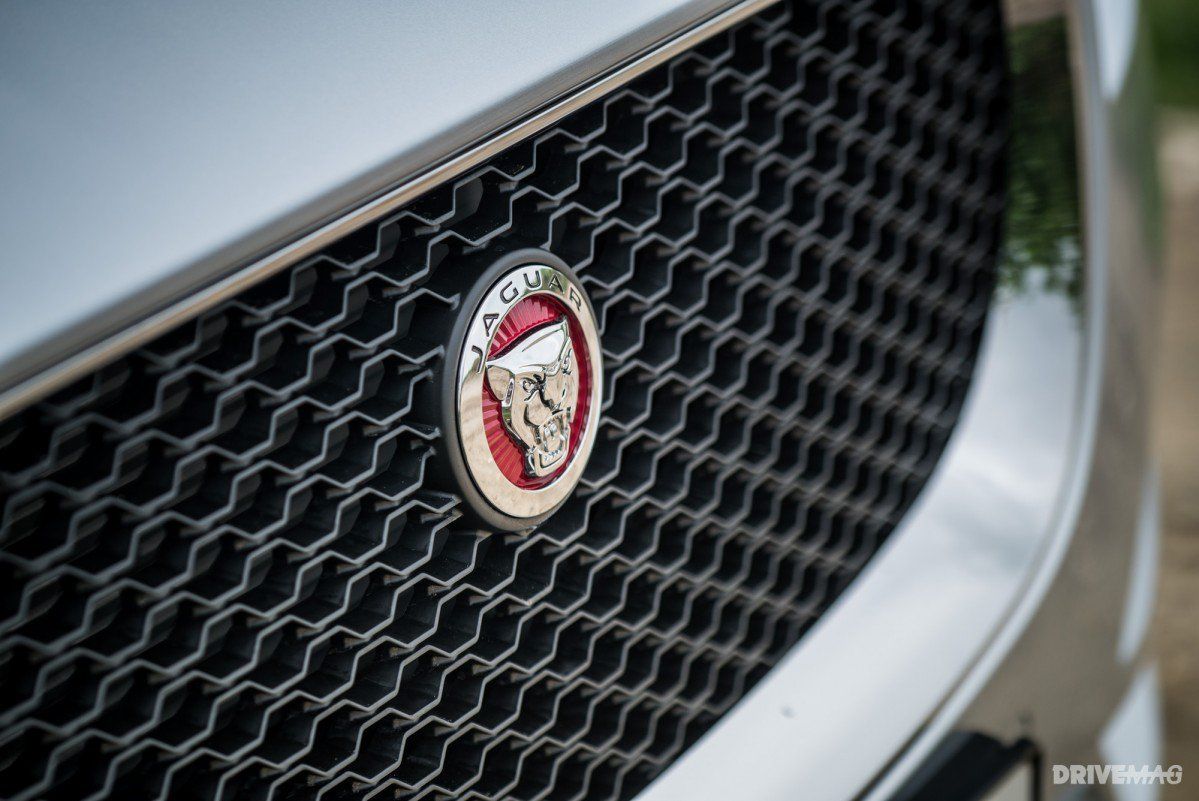 The four-cylinder 2.0-liter turbodiesel hidden under the F-Pace's long hood is developed entirely in-house by Jaguar Land Rover as part of the "Ingenium" family. It packs plenty of punch, but it will not beat any land speed records. 0 to 62 mph (100 km/h) takes 8.7 seconds and top speed is 129 mph (208 km/h). While both figures are as remarkable as the sun setting every evening, the F-Pace feels lively under acceleration for a big SUV.

That's mainly due to a healthy 318 lb-ft (430 Nm) of peak torque available from just 1,750 rpm and an excellent eight-speed automatic transmission from ZF that exploits the engine's muscle efficiently. Jaguar claims the F-Pace has a near perfect 50/50 weight distribution (depending on the engine), and we felt that during our time with the car. The crossover is surprisingly nimble and balanced for an SUV – it goes through turns more like a sports sedan than a crossover. That's also explained by the rear-biased all-wheel drive system and the torque vectoring system adapted from the F-Type. The suspension setup is sourced from the Jaguar sports car as well, which explains the F-Pace's exemplary handling characteristics.

This chassis begs for a more powerful engine and thankfully Jaguar provides up to 380 hp on the range-topping F-Pace S. Cornering ability is also enhanced by the 2,175-mm (85.6-in) width (including mirrors). 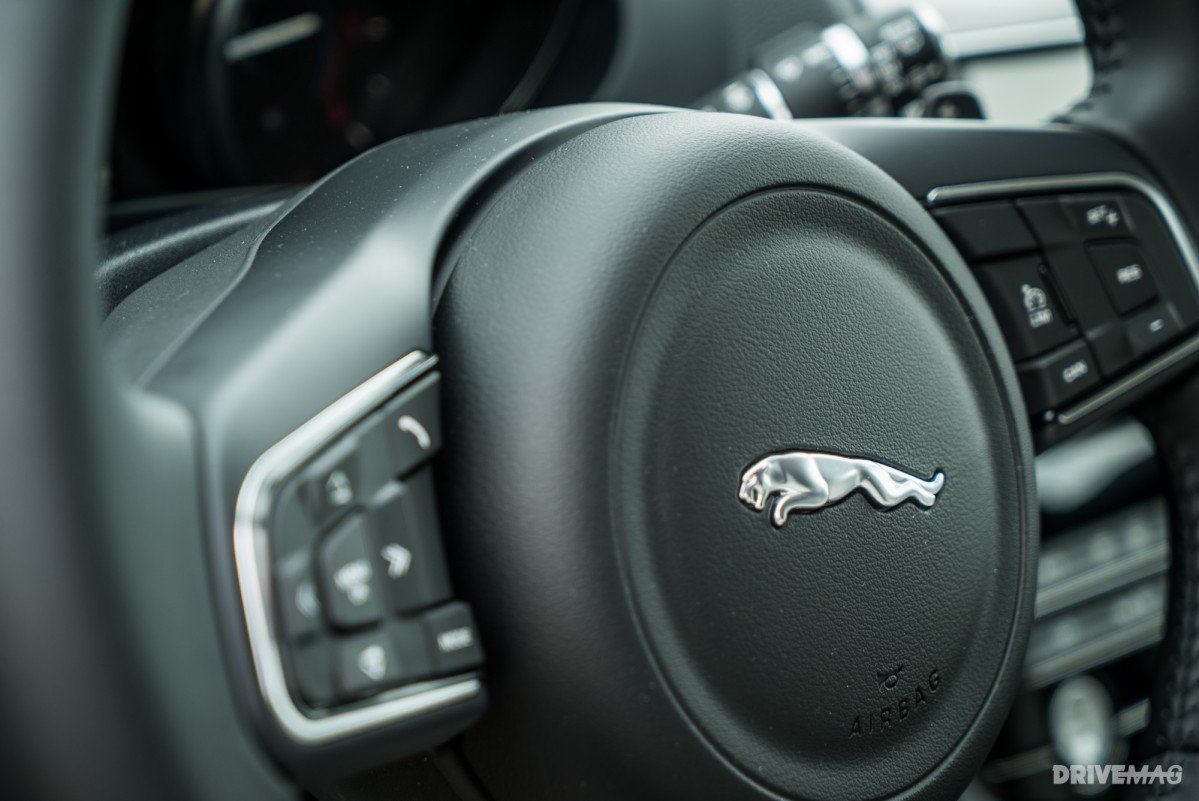 The F-Pace hasn't been assessed yet in North America and Europe, but we don't think there's any reason to worry about its crashworthiness. After all, Jaguar's most recent models, the XE and XF sedans, both received a maximum five-star rating from Euro NCAP. Standard safety features on the car we tested included eight airbags, ABS, autonomous emergency braking, as well as stability and traction control, among other things.
Optional features fitted to our car included a rearview camera, parking sensors, and a traffic sign recognition system. Our F-Pace had the standard suspension, which doesn't feature an adaptive damping system. Despite that, it offers a great balance between ride quality and handling – particularly when fitted with the standard 18-inch wheels. With the optional 19-inch rims our car had the suspension slightly less supple and potholes unsettle it.

Inside, the F-Pace treats its passengers with comfortable seats, intuitively placed controls (minus the window switches located too high on the front doors), and a silent cabin. The engine does not produce the most pleasant sound under hard acceleration, but once you're up to speed its agricultural rattle fades into the background noise. When it comes to build quality, the F-Pace can't quite compare with rivals like the Audi Q5, Mercedes-Benz GLC or BMW X3. While materials used in the upper part of the cabin look and feel okay to touch, the lower half of the cabin features hard, less polished plastics that are not worthy of a premium vehicle. The buttons on the center console aren't too posh either, and the execution lacks the finesse seen in an Audi interior.

That is quite a shame because the dashboard has an appealing design. These shortcomings are not visible at first sight, but people who are in the market for a premium SUV will notice them. You'd be surprised how much space the F-Pace hides under its low, muscular body. Headroom and legroom are good on both rows of seats, which is rather remarkable given the crossover's sloping roofline. Cargo volume is excellent for the segment – a class-leading 33.5 cu-ft (650 liters in Europe) with the 40:20:40 split-folding rear seats in the upright position.

Maximum volume is 63.5 cu-ft when the rear seats are folded flat. However, our car's cargo capacity suffered due to a nasty lump in the boot floor necessary to house the 19-inch spare wheel – a rather embarrassing design flaw. The standard InControl Touch infotainment system features an 8-inch touch screen display with physical buttons on each side. The interface is fast and intuitive to use most of the time, but has some rather outdated graphics and lacks in advanced features. The optional InControl Touch Pro system is a better choice. It comes with a 10.2-inch screen that features improved graphics and large virtual buttons. However, even that one lags behind interfaces offered by competitors. The 2.0-liter turbodiesel engine is the sensible choice in the F-Pace lineup, but don't expect to be blown away by its fuel economy figures. During our time with the F-Pace 20d AWD, the trip computer only briefly displayed less than 9 l/100 km (26.1 mpg US). That's despite a claimed average fuel consumption of 5.3 l/100 km (44.4 mpg US) according to the NEDC cycle. In the US, fuel economy figures have not been released yet.

Still, that's not so bad considering we're talking about a vehicle weighing 1,775 kg (3,913 lbs). Not to mention that cars typically aren't driven lightly during test drives. The F-Pace we drove was a mid-range Prestige trim level, which packs most of the features you would expect in this segment. Highlights include the JaguarDrive Control system with four driving modes (Dynamic, Eco, Standard and Rain/Ice/Snow), All Surface Progress Control (ASPC) for low-grip surfaces, electric parking brake, hill start assist, and more.

LED taillights, two-zone automatic air conditioning, InControl Touch infotainment system, and Bluetooth connectivity complete the standard equipment. Our F-Pace packed about €10,000-worth of optional extras, proving that Jaguar learned a thing or two from the Germans. The Jaguar F-Pace 20d AWD is not a performance crossover as the automaker claims – at least not with this entry-level engine. Still, it's great fun to drive, with its fine-balanced chassis only rivaled and bested by the BMW X3 and Porsche Macan. The F-Pace is priced similarly to the BMW but is less expensive than the Porsche. Both German competitors have better quality interiors and are even more fun to drive – the Macan by a long run.
Therefore, the F-Pace's mission is difficult, but not impossible. You'll undoubtedly turn more heads with the F-Pace than with any of its German competitors, and you will get the sense you're in a more exclusive car.